Which proteins contribute to infection?

In the last 20 years, several coronaviruses have appeared. There was SARS-CoV-1 in 2002, MERS-CoV (Middle East Respiratory Syndrome) in 2012 and finally SARS-CoV-2, which appeared in 2019. This rapid evolution provides opportunities to discover common inhibitors, so that older therapies can remain effective in the future.

In order to understand the degree of similarity between these 3 variants, an international study compared several viruses from this family. Initially, a pool of proteins common to these viruses was established: the localization of viral proteins from E, M, N and S structures, as well as 16 other non-structural proteins coded by a portion of the ORF1ab viral genome within a cell line was studied by expressing them one at a time. It was thus possible to localize the proteins conserved in the same place by the 3 viruses. Only the Nsp13 protein was localized at the cytoplasm level for SARS viruses and at the mitochondrial level for MERS-CoV.

However it was possible to identify different localization when these proteins were expressed naturally during infection, without being isolated. The reason for this is undoubtedly that the proteins are recruited within viral replication compartments. This result was observed in all 3 viruses: cellular localization of proteins between various coronaviruses is robustly maintained. 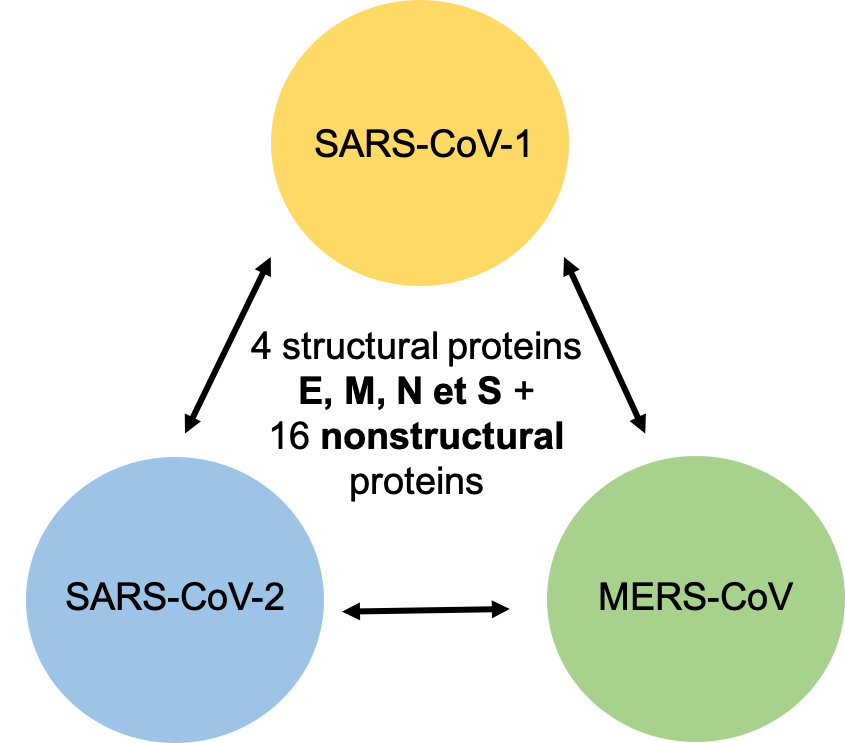 Interactions between cellular proteins and those of the different viruses were then compared. As was expected, SARS-CoV-1 and SARS-CoV-2 had the largest overlap: it was easier to detect common protein interactions between these two viruses. The biological process targeted by these proteins seems essential and more likely to be required in emerging coronavirus variants. However differences in levels of interaction for certain viral proteins were observed, suggesting a possible degree of plasticity in cellular control by coronaviruses.

In order to better understand the infection mechanisms involved in SARS-CoV-2, cellular proteins were studied further by performing perturbations on 332 of them, with the ACE2 binding receptor for SARS-CoV-2 used as positive control. The degree of infection within the cells was then measured. Several cellular proteins necessary for infection by SARS-CoV-2 were thus identified: the Sigma-1 protein as well as interleukin IL-17 and its receptor IL17RA. An increase in IL-17, a pro-inflammatory cytokine, is linked to the severity of COVID-19. Moreover, other studies have shown that the inactivation of the IL17RA receptor leads to a reduction in SARS-CoV-2 infection. Release of the IL17RA receptor, in circulation-soluble form may also play a role as bait for IL-17, thus preventing the activation of its signaling channel and reducing the seriousness of the illness.

It was also shown that by blocking Tom70, a mitochondrial receptor whose antiviral role is to activate the production of interferons, the replication of the virus is increased. At the time of infection by SARS-CoV-2, the viral protein ORF9 forms a complex with Tom70, visible by co-localization, and prevents its antiviral actions.

To determine the impact of compounds targeting proteins identified as “SARS-CoV-2 partners”, the effect of drugs prescribed to 738,933 US patients infected with SARS-CoV-2 was measured. The effect of a PGES-2 inhibitor (indometacin), an interactor of Nsp7 from all three viruses, was able to be evaluated. In a small cohort of patients recently treated with indomethacin there was a lesser risk of hospitalization, a result which opens up interesting possibilities.

An understanding of the mechanisms of the action of coronaviruses and the identification of common protein factors essential to their proliferation could therefore open the door to new treatments able to adapt to the mutations that these viruses may produce in the future.