During the COVID-19 pandemic there has been much talk about monoclonal antibodies (mAb). The technique, however, is not new. Monoclonal antibodies have revolutionised the treatment of many illnesses such as cancer, auto-immune and inflammatory illnesses, and infectious diseases, and they can limit transplant rejection. Early serotherapy dates back to 1890, since patients could acquire passive immunity against tetanus or diphtheria through the transfusion of blood from humans or from surviving animals (polyclonal antibodies recognizing multiple targets).

MAbs recognise a single target and act either by blocking the target’s functions or by recruiting other immune factors via their Fc domain (effector functions). The neutralising antibodies are able to block the viral entry by binding either to the virus or to the receptor of the target cell. In 1998, palivizumab was the first neutralising mAb to provide therapeutic benefits in the treatment of pneumonia caused by the Respiratory Syncytial Virus (RSV). However, this approach later demonstrated limited effectiveness in the treatment of respiratory illness. Recently, several mAbs showed promise for the treatment of Ebola, influenza A or HIV, using prophylactic (preventative) or therapeutic (treatment) approaches. With any given virus, the mAbs must target as many strains as possible and impede the emergence of escape variants. The scientific literature does not indicate clear evidence of synergy when several non-competitive mAbs are used in combination.

Recently, worldwide efforts to combat COVID-19 has enabled the development of medicines and vaccines with a level of effectiveness never before seen. RECOVERY was the most important clinical trial to evaluate the effectiveness of treatment by anti-SARS-CoV-2 antibodies (amongst others) but plasma transfers from convalescing patients were stopped in January 2021 due to a lack of effectiveness. The main problem was the low level of neutralising antibodies contained in this plasma. Amongst the 13 mAbs that are today approved for the treatment of infectious diseases, 6 are used in the urgent treatment of COVID-19 (including bamlanivimab, REGN-COV2, etesevimab and regdanvimab). Numerous other mAbs are currently in development to help curb acute infections.

But more to the point, how do they work? Whether under development or already authorised, they are all neutralising and targeted against the Receptor Binding Domain (RBD) of the spike, so as to block binding with the ACE2 receptor or other possible co-receptors. Class 1 mAbs recognise the RBM (Receptor Binding Motif) only under the “open” form of the spike (REGN10933, LY-CoV016, AZD8895, Brii-196, ADG2, CT-P59, ABBV-2B04) whereas the class 2 mAbs recognise it under both its forms (LY-CoV555, AZD1061, BGB-DXP593). The VIR-7831 recognises the glycan (complex sugar) in position N343. In certain cases, these mAbs can render the spike inactive by causing a structural change to its fusion form. Some may block it by keeping it in its closed conformation (C144). Although other mAbs target alternative domains to the RBM (cryptic sites, N-terminal domain), none is being developed. The effector functions of the mAbs are currently being evaluated, because some data suggests these functions may worsen the infection (Antibody-Dependent Enhancement, ADE). As a precaution, 5 mAbs, currently in development, have been modified to abolish or modify these functions (including VIR-7831, VIR-7832, ADG2).

How effective are they? When the first mAbs were authorised, the current variants had not yet formed. Since the SARS-CoV-2 rate of mutation is relatively weak, immune escape was underestimated. It was also thought that anti-RBM mAbs would limit this phenomenom since the RBM site is highly conserved (it mutates little since it is essential to the virus). 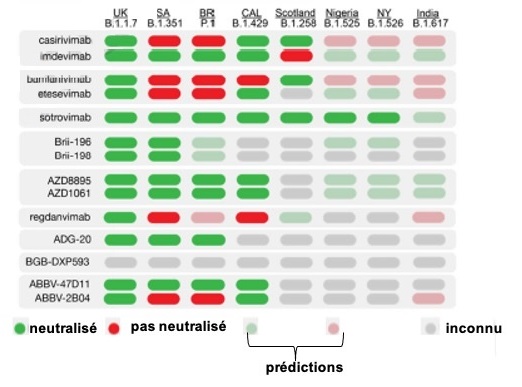 Other factors may explain the relative success of mAbs. The dosage, the type and time of administration, whether the patient is HIV positive or not and the viral titer are key factors in the therapeutic success of mAbs. So, in the past, REGN-COV2 was most effective when given early to HIV-negative patients with high viral load and moderate symptoms. In addition, the host’s antibodies will also help to attenuate the illness’ severity. Initially, REGN-COV2 was given in too high doses: there was no dose effect, it made subcutaneous or intramuscular administration impossible, and large-scale production was limited.

But the moment when the therapy begins is also important. So VIR-7831 (Sotrovimab) is in the process of being approved for emergency treatment since it has given spectacular results (phase 3) on high-risk patients (+ 55 years old, with pre-existing conditions), reducing mortality and hospitalisation by 85%. In addition, it is capable of neutralising all current variants. Other mAbs are currently being developed for early therapy (AZD7442, BGB-DXP593, ADG20).

MAbs used in later-stage treatments have historically been less effective. Bamlanivimab, VIR-7831 et Brii-196 have just been removed from ACTIV-3 testing by the NIH (National Institute of Health), but other mAbs are still being evaluated. The anti-IL6 mAbs (Sarilumab, Tolicizumab) have been evaluated in 3 different later-stage tests (RECOVERY, REMAC-CAP, COVACTA) and have given contradictory results. Bamlanivimab and REGN-COV2 are currently being evaluated in prophylactic tests (BLAZE-2, Study 2069) and seem to limit the risks of symptomatic COVID-19. They may provide an alternative for people not eligible for vaccination, or with poor vaccination responses. Other clinical trials are still taking place (AZD889, AZD1061).

These mAbs differ in terms of action mechanisms, effects and sensitivity to variants, but their stability and effectiveness may be able to be modulated by molecular engineering. Over the last year, the domain of anti-infection mAbs has advanced more quickly than in the whole of the last 20 years, which is very positive for their use against other diseases too. However, global access to these treatments remains limited, due to the high volumes needed and modes of administration, which necessitate hospitalisation.

Monoclonal antibodies under study for treatment or prevention of COVID-19 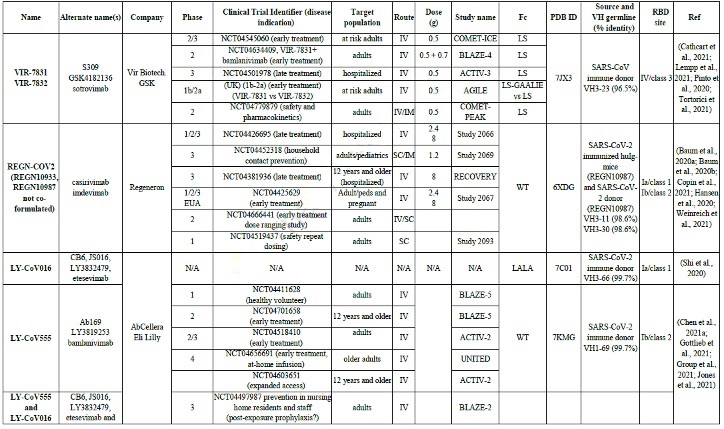