Like all viruses, SARS-CoV-2 evolves in order to adapt to its environment. Certain current variants can escape not only the antibodies produced either by vaccination or infection, but also the monoclonal antibodies (mAbs) used in emergency treatment. Worse still, this evolution may be caused, through selection pressure, by those same antibodies given as treatment. The combination of several neutralising antibodies may, however, counteract this phenomenom, but many questions remain on the use of mAbs in combination therapies.

Approved as an emergency treatment, the REGEN-COV combination (formerly REGN-COV2, produced by the Regeneron pharmaceutical company with Roche) is made up of two mAbs, casirivimab (REGN10933) and imdevimab (REGN10987). Both target the spike RBD (Receptor Binding Domain) and block entry of the virus into the host cell.

Researchers at Regeneron have evaluated the emergence of variants in the presence of these mAbs. In vitro, casirivimab loses much of its effectiveness when faced with the b (South African) and g (Brazilian) variants, unlike imdevimab, and a combination of the two remains effective in the context of all variants tested (D614G, UK, Californian, New-York, and Indian). In in vitro tests, these mAbs by themselves (as with 9 others) bring about the rapid appearance of escape mutations. However, this does not happen when the mAbs are used in combinations, except when they are active against the same epitope (LY-CoV555+CB6). When REGN10985 (a third mAb) is added to REGEN-COV, no immune system evasion occurs, that is, there is no resistant form of the virus, while the potential for neutralisation is the same as with REGEN-COV used by itself. The 3 mAbs are able therefore to attach themselves simultaneously to the spike without overlapping (cryo-electron microscopy). In order to escape the combined mAbs, the virus must undergo several mutations, which makes the emergence of variants more difficult (RNA-seq).

REGEN-COV mAbs were then administered to hamsters infected with SARS-CoV-2. Of 40 animals treated using monotherapy, 18 developed variants in the RBD, whereas no variants were detected in the 20 animals treated with REGEN-COV or in those having received no treatment. Of the 7 different variants in total, 6 had already been described as escape variants (GISAID data base) and 4 had been identified in vitro. During tests, when 1 000 COVID-19 patients were given REGEN-COV, it was observed that patients treated with this cocktail developed as many minor variants as the placebo group (over 30 days). In several patients having received the treatment, S477N, N501T, K537R, S494P, and G446V mutations were observed, though rarely; these mutations had already been identified as being in circulation (GISAID data base). The G446V mutation reduced REGN10987’s neutralisation capacity by 135 times, S494P reduced that of REGN10933 by 4,5 times, while the other mutations did not enable escape. On the other hand, the combination’s capacity for neutralisation did not diminish.

Compared to the use of the same mAbs in monotherapy, the REGEN-COV2 combination clearly limited the emergence of escape variants in COVID-19 patients. This efficacy is due to the fact that these mAbs are not competitive and are relatively successful in combatting current variants. Combining 3 mAbs is not necessarily more effective in terms of neutralisation, but does limit escape more successfully. The in vitro identification of escape variants has proved to be a good predictive model of circulating variants under real conditions, and results are corroborated in vivo.

Finally, this study underlines that in the majority of COVID-19 patients, several very heterogeneous mutants evolve insidiously, forming a large reservoir of current and future variants. Constant surveillance is therefore necessary so as to maintain the effectiveness of these therapeutic approaches. 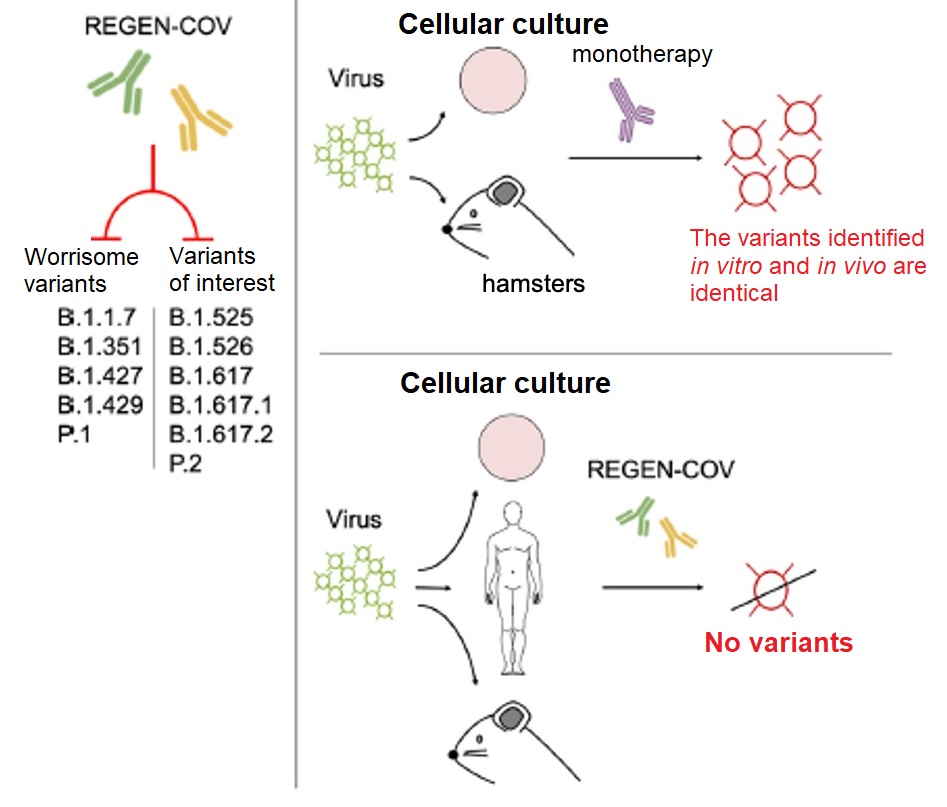