The COVID-19 pandemic is still not over and SARS-CoV-2 continues to evolve. Firstly detected in November 2021 in Botswana and in South Africa, the Omicron (B.1.1.529) variant of concern (VOC) is supplanting the Delta variant and becoming dominant. Its doubling time may be between 1.2 and 3.6 days in an immunized population. It carries more than 55 mutations in its genome, of which 32 are in the spike: 7 in the NTD (N Terminal Domain), 15 in the RBD (Receptor Binding Domain, the principal target of neutralising antibodies), 3 near the furin cleavage site, and 6 in the S2 region. At least 11 of its mutations have already been observed in other variants. As well as its increased transmissibility, it is supposed that its mutations enable it to evade neutralising antibodies that targeted previous strains. Several research teams are currently working on this question.

An American team at the University of Columbia evaluated the capacity of several sources of antibodies to neutralise Omicron in vitro. They took blood antibodies from 10 convalescing COVID-19 patients (between 9 and 120 days after the appearance of symptoms). These samples contained 32 times less antibodies capable of neutralising Omicron than the neutralising antibodies of the ancestral variant D416G. In patients vaccinated with Pfizer-BioNTech (between 15 and 213 days after the 2nd injection) or Moderna (6-177 days), the neutralisation potential fell 21 and 8,6 times respectively. With Johnson & Johnson (50-186 days) or Astrazeneca (91-159 days) the situation was worse: no vaccinated patient was capable of neutralising Omicron. But after vaccinated individuals were given a Pfizer-BioNTech or Moderna booster dose, neutralisation of Omicron was again effective, despite a 6,5-fold fall as compared to the D416G variant.

The researchers then evaluated 19 neutralising antibodies known to target the spike (17 targeting the RBD and 2 the NTD), of which 9 are used therapeutically. 17 amongst them entirely or partially (more than 100-fold) lost their neutralising capacity. The class 4 antibodies, which target a cryptic area of the RBD in the “up” position, remained the most effective. The researchers then identified the specific roles of the new mutations in antibody resistance: Q493R renders class 1 and 2 antibodies (that prevent binding with the receptor) ineffective, N440K and G446S alter certain class 3 antibodies, and S371L alters the neutralisation of all classes of antibodies. 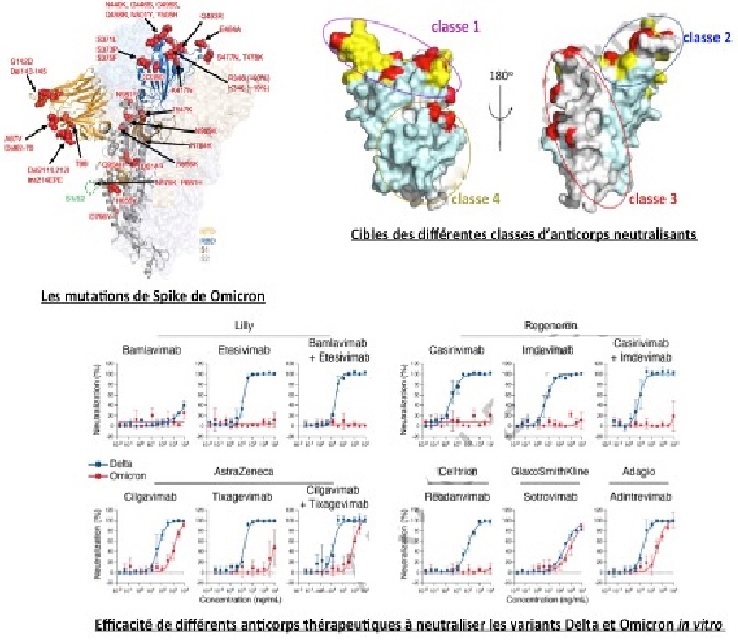 Another study, by French researchers (at the Institut Pasteur de Paris) and Belgian researchers (at the University Hospital of Leuven), reached similar conclusions. They isolated the Omicron variant in a non-vaccinated traveller who arrived in Belgium from Egypt, then made a structural model from its protein sequence. As in the previous study, they confirmed that Omicron mutations alter the binding of 4 classes of neutralising antibodies. Amongst 9 therapeutic antibodies, 6 were ineffective against Omicron (including Bamlanivimab, which also fails to neutralise Delta), while the others had 20 times less effectiveness since they bonded less well with the spike (Cilgavimab, Andintrevimab). Only Sotrovimab neutralised Omicron as well as it neutralised Delta, but with 3 times less effectiveness than against D416G.

The antibodies of 54 vaccinated individuals (16 Pfizer-BioNTech, 18 Astrazeneca, and 20 having received 3 doses of Pfizer) were then analysed to evaluate their capacity to neutralise Omicron, Delta, or the ancestral strain D416G. The samples were taken 5 months after the 2nd injection and 1 month after the 3rd, and levels of neutralising antibodies were low since they had decreased over time. The results showed effective antiviral activity against D416G, weaker activity against Delta, and none at all against Omicron. The 3rd dose re-established a strong capability of neutralisation against the 3 strains, and increased levels of antibodies by up to 49 times. Neutralisation of Omicron was 18 times weaker than against D416G and 6 times weaker than against Delta. With a cohort of 40 convalescent COVID-19 patients, the results were similar. Between 6 and 12 months after the appearance of symptoms, levels of antibodies capable of neutralising D416G or Delta were relatively stable and about 2 times higher than in vaccinated individuals, but they were incapable of neutralising Omicron in the case of 2/3 of patients. A booster dose of Pfizer-BioNTech increased levels of antibodies targeting D416G 137-fold, and restored the capacity to neutralise Omicron in all patients. Here its efficacy was reduced 53 times as compared to D416G and 23 times as compared to Delta.

Omicron has therefore opened a new chapter in the COVID-19 pandemic, and these studies show how it is able to spread so efficiently within an immunised population. Vaccinated individuals or those already infected remain at risk from Omicron, and antibody therapy is no longer effective. The previous variants had developed resistance against class 1 and class 2 antibodies in particular, and those targeting the NTD. Omicron, for its part, is resistant to all classes of neutralising antibodies. If this variant acquires 2 or 3 additional mutations in strategic areas of the spike, it will become completely resistant. It is therefore imperative that vaccines and antibody therapies are reformulated. But this time, the most conserved regions of the virus must be targeted so that the vaccinal strategy remains effective long-term. In the meantime, booster doses need to be massively deployed, though we do not know how long this will be a useful tactic.