The emergence of Variants of Concern (VOCs) with increased transmissibility and capable of escaping immunity has called into question the efficacy of current vaccines. Several studies have shown that these variants’ new capacities involve mutations in the spike protein that controls entry of the virus into cells. The Omicron variant, recently identified in South Africa, carries many more mutations than other VOCs and may well supplant Delta, which currently dominates the pandemic. These changes suggest that this strain evolved independently, and may have arisen from an isolated, immunocompromised population or from an unknown animal reservoir. Omicron seems to infect convalescent or vaccinated individuals more easily than previous variants. But its properties are still not fully understood.

German researchers at the University of Göttingen have evaluated the capacities of the Omicron spike to evade neutralising antibodies induced by natural infection or through Pfizer-BioNTech vaccination. Analysis of sequences deposited in the GISAID data base reveals 37 mutations in the spike as compared to the original Wuhan strain. Thirteen mutations are unique, while the remainder can be found in other variants. Two are situated in the NTD (N terminal domain), 4 in the RBD (Receptor Binding Domain, which binds the ACE2 receptor), 2 between the RBD and the S1/S2 domain, and 5 in S2.

In vitro tests show that the Omicron spike binds to the ACE2 and efficiently infects human cells that express it. However, its tropism (the set of targeted cells) shows differences with the Wuhan strain: to enter the cell, it requires the Cathepsine L protease, but not the TMPRSS2 protease. It is also capable of using the ACE2 of several animals (especially mice and Rhinolophus bats), indicating high zoonotic potential.

Omicron has proved resistant to REGN-COV2 therapeutic neutralising antibodies (Regeneron, Etesevimab and Bamlanivimab (Eli Lilly)), unlike the original strain, which is very sensitive to them. Only Sotrovimab (GlaxoSmithKline) has been shown to be effective: it does not enter into competition for ACE2 binding, and neutralises numerous strains of sarbecoviruses.

Omicron is therefore more resistant to antibodies induced by natural infection (with the original strain) or by vaccination, and to therapeutic antibodies, than all previous VOCs. While heterologous vaccinations (with different vaccines) or a 3rd dose have proved more effective, we do not know for how long. On the other hand, Sotrovimab and soluble receptors remain effective against Omicron. Two doses of Pfizer-BioNTech will probably not give enough protection in severe cases arising from Omicron. Although current vaccines did protect against severe cases caused by Delta, they need to be adapted to fight Omicron. 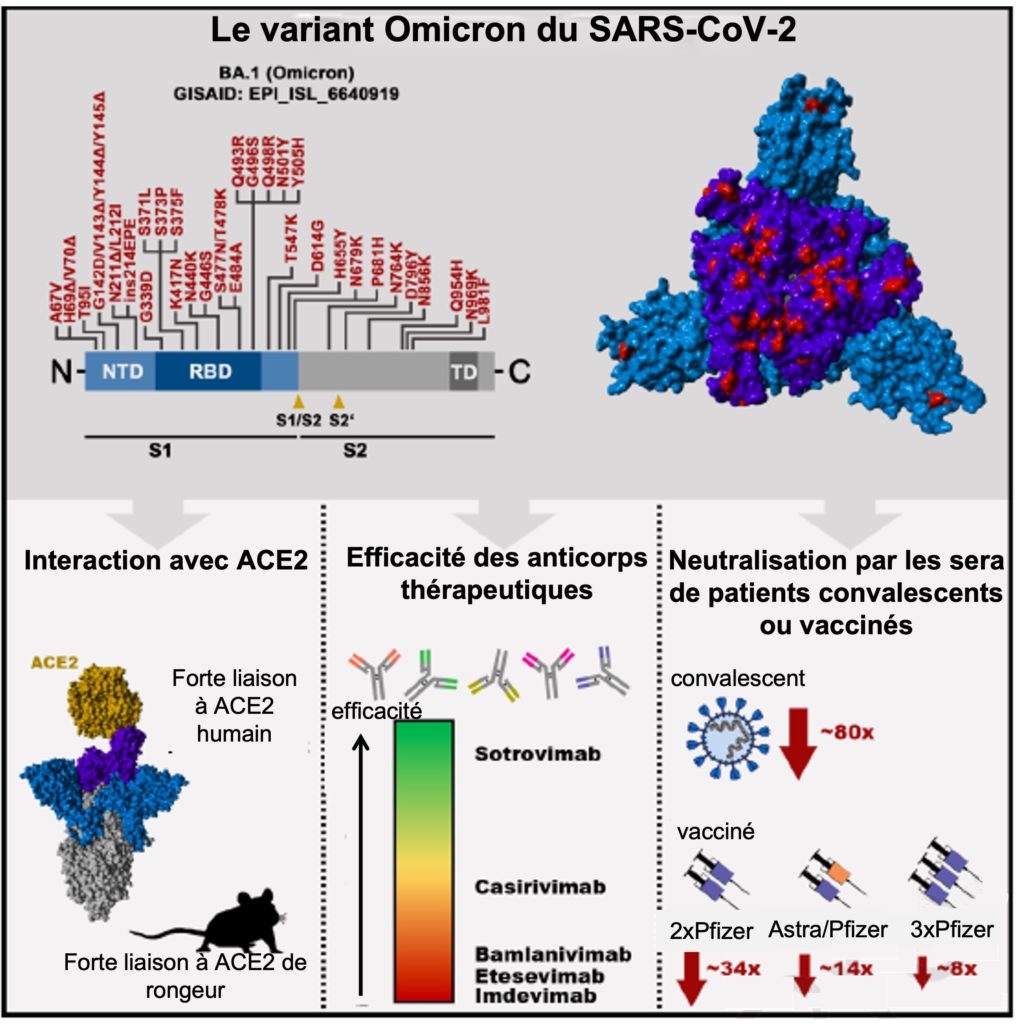 Markus Hoffmann and coll. The Omicron variant is highly resistant against antibody-mediated neutralization – implications for control of the COVID-19 pandemic. Cell, 13 December 2021.