Innate antiviral immune responses, located upstream to antibody and cellular responses, impose selection pressure during SARS-CoV-2 infection and directly impact the severity of COVID-19. In infected cells, the RIG-I and MDA-5 pathways detect the presence of viral RNA and activate certain defence mechanisms. But some data suggests that SARS-CoV-2 could be capable of blocking these mechanisms. British and American researchers (at University College, London and the University of California) have suggested that this blockage could be linked to mutations situated elsewhere than in the spike.

The researchers infected human cells with several strains of SARS-CoV-2, both the original strain and the Alpha variant, and assessed viral replication as well as the innate cellular response using several approaches. The results showed that the levels of interferons (IFN-β, λ-1 and λ-3) and genes that they activate are less in a cell infected by Alpha, giving a replication advantage to the original strain. In addition, Alpha is less sensitive to the antiviral activity of  IFN-β, probably due to the presence of the D416G mutation in the spike. The proteins of the innate antiviral response are much less activated, leading to a weak secretion of pro-inflammatory cytokines (IL-6, CCL5, CXCL10). These observations are very marked at the beginning of infection but much less so in the later stages (the blockage is only temporary).

In addition, the relative expression levels of the viral protein Orf9b are higher with the Alpha variant (up to 80 times higher,  depending on the strain). This is due to the GAT mutation taking the place of CTA,  located upstream of the gene (non-coding Kozak sequence), which allows a more efficient expression of its mRNA.

The researchers also showed that Orf9b interacts with the mitochondrial protein TOM70 so as to block its antiviral action. This interaction ceases when Orf9b is phosphorylated at later time points, a process regulated by still unknown cellular proteins. The Orf6 and N viral proteins are also overexpressed, and are also known to block innate antiviral responses.

This work shows that mutations situated elsewhere than in the spike, which are moreover noncoding, increase the transmission of SARS-CoV-2. By optimising the expression of Orf9b, Orf6 and N, which temporarily block the innate antiviral response, the Alpha variant obtains advantages in replication and transmission. The Delta and Omicron VOCs carry mutations in the same Kozak region as Alpha, which shows that the 3 adapt better to their host that the initial strains. It is therefore crucial to study other mutations than those in the spike in greater detail in order to better understand the behaviour of current and future variants. 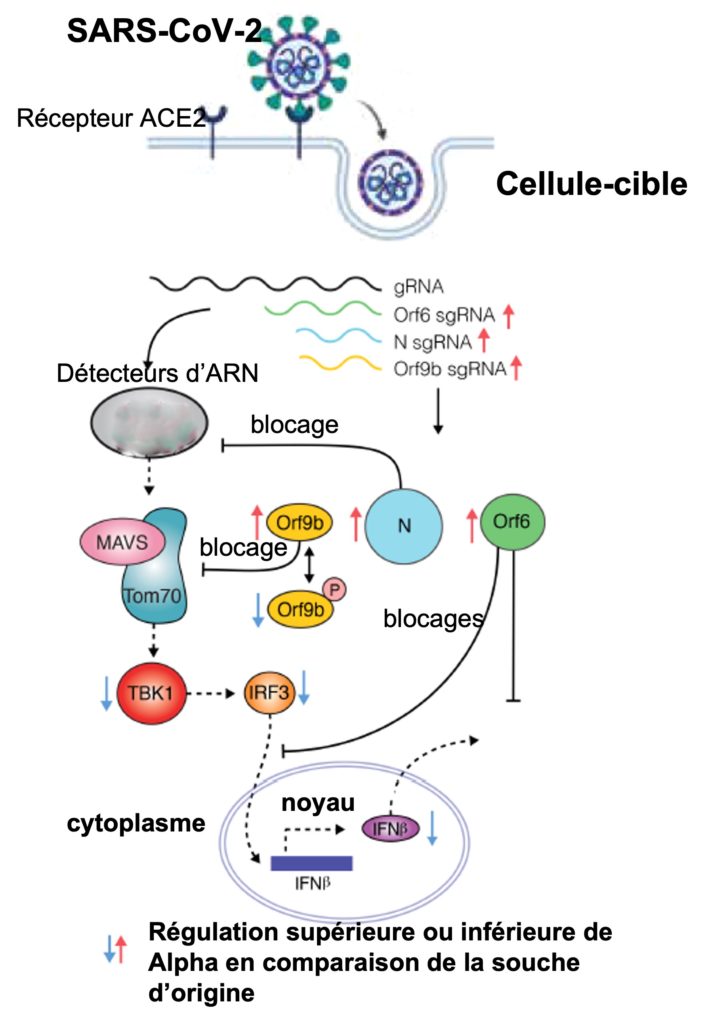