The protective mechanisms of Moderna – a study using macaques

Mass vaccination against SARS-CoV-2 is the best means we have of controlling the COVID-19 pandemic. The Moderna and Pfizer mRNA vaccines, which are based on immunity created by targeting the spike protein which governs the entry of the virus into the cell, have been shown to be more than 94% effective in preventing symptomatic cases. Several other candidate vaccines are currently being evaluated or developed. However, the immunological characteristics linked to protection are still poorly understood. They are nevertheless essential for evaluating vaccine efficacy, in determining the necessary doses, in best adapting vaccination to age and in evaluating the length of protection and the need for booster injections.

In order to investigate this issue further, American researchers at the National Institute of Health (NIH, Bethesda) defined correlates of protection in rhesus macaques vaccinated with increasing doses of Moderna (2 injections, 4 weeks apart), that is, the levels and characteristics of antibodies required to protect them. Two weeks after the last injection, the researchers evaluated the immune response and levels of viral replication in the upper respiratory tract (using nasal swab samples) and the lower respiratory tract (bronchoalveolar fluid washes). The results showed that the higher the vaccine dose, the more anti-spike antibodies can be detected in the blood circulation (IgGs) and in the respiratory mucus membranes (IgGs and IgAs), with a strong neutralising activity in vitro: they block viral entry. Numerous antibodies target the RBD (Receptor Binding Domain, which interacts with the human ACE2 receptor) of the spike, and neutralisation is effective against the Alpha and Beta VOCs (variants of concern). In addition, the CD4 T response is relative to the dose of the vaccine, but the CD8 T response is almost non-existent.

When the macaques were infected with SARS-CoV-2 four weeks after being vaccinated, the reduction in viral replication in the overall respiratory tract largely depended on levels of antibodies: when the level of antibodies was increased tenfold, viral replication decreased tenfold. The virus was eliminated more rapidly from the lungs than from the nasopharynx, suggesting that immunological mechanisms are different in these areas.

When the level of antibodies is higher than 336 IU/ml in the lungs, the sub-genomic RNA level, which reflects active viral replication, never exceeds 10,000 copies per swab. In the nasopharynx, these values are 645 IU/ml and 100 000 copies per swab. The researchers therefore decided to fix these values as the minimum required to protect against moderate and severe lung infection.

In the same areas, vaccination reduces pathological inflammation as well as the presence of the virus. When these circulating antibodies (IgGs) are transferred passively to the hamsters (in the form of several mixed serums), they are protected against SARS-CoV-2 infection as long as the macaques had received at least  2 to 10 µg of vaccine. There are then sufficient circulating antibodies to give protection.

This study clearly shows that levels of antibodies induced by the Moderna vaccine determines the control of the infection in the respiratory tract and thus protection against COVID-19 in the macaques. As the vaccine is administered intramuscularly, the circulating IgGs that are produced will then effectively compensate for the lack of locally induced mucosal immunity, probably by transudation of the serum to the mucosa. The level of antibodies required to give protection is incidentally higher in the nasopharynx than in the lungs since the virus is more present here. This partly explains why the vaccine gives more effective protection in severe cases (pulmonary distress) than in moderate cases (the infection remains localised in the nasopharynx).

These results could have important implications for vaccination programmes: a single dose of vaccine limits severity but not reinfection; a booster or natural reinfection after one dose (which may enhance mucosal immunity) protects against symptomatic cases, but higher doses (or additional injections) may further control transmission by optimising the mucosal immunity in the nasopharynx. 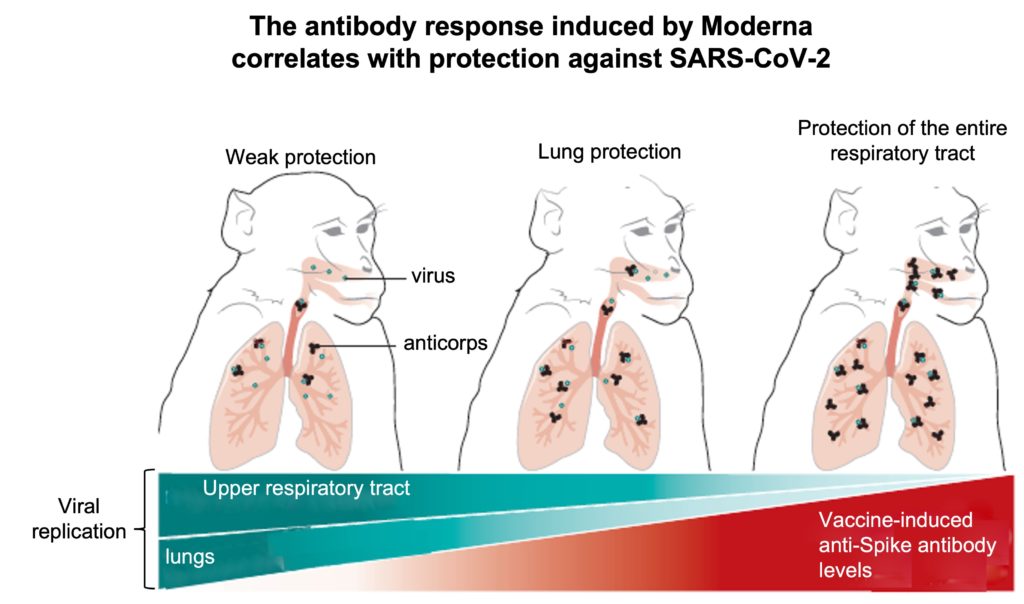