The effectiveness of vaccines against variants

In August 2021, the World Health Organisation (WHO) designated 4 variants as “of concern” (Variants of Concern, VOC): the Alpha/UK, the Beta/South African, the Gamma/Brazilian and the Delta/Indian variants. This classification was based on their abilities to spread and to escape immune responses, and on their virulence. Amongst the 21 vaccines that have been urgently authorised in various countries, 6 have been approved by at least one member country of the WHO: the Pfizer/BioNTech and Moderna (mRNA vaccines), Astrazeneca/Oxford and Johnson & Johnson/Janssen (viral vector vaccines) Novavax (recombinant spike protein vaccine) and Sinovac and Sinopharm (inactived virus vaccines). It is difficult to compare their respective effectiveness against the 4 VOCs since experimental conditions can vary in clinical testing. Vaccinal efficacy depends principally on the ability to induce neutralising antibodies (that block entry of the virus), capacity for cross-cellular responses and whether protection is effective under real-life conditions.

Those vaccines that target only the spike bring about the production of numerous neutralising antibodies directed against several domains of the protein. Certain particular mutations, such as E484K and N501Y, present in the Beta and Gamma variants, reduce the potential for neutralisation (evaluated principally in vitro) of antibodies targeting these domains. But the many other neutralising antibodies that are produced, and which target other domains, allow vaccines to retain some effectiveness.

The in vitro reduction in neutralisation activity does not necessarily mean that the vaccine will be completely ineffective, since it will continue to limit numbers of serious cases. The Moderna, Astrazeneca and Pfizer vaccines produce enough antibodies to protect for at least 6 to 8 months, and maybe longer, against the Beta, Gamma, Iota and Epsilon variants. In addition, T cellular immunity and non-neutralising antibodies give significant protection which does not seem to be affected by mutations in the spike: the Alpha and Beta variants are not able to escape the cellular immunity brought about by vaccines. After 2 doses, vaccines protect from severe illness resulting from variants (see diagram below) even though neutralisation effectiveness in Astrazeneca, Moderna and Novavax is reduced in the case of Delta. This protection should be maintained against future variants, even where the level of circulating neutralising antibodies has dropped over time. However, protection against infections and transmission is reduced where variants are highly transmissible (Delta), exposing vaccinated individuals to greater risk.

The overall population’s natural immunity increases with each infection, causing the virus to evolve by enhancing its capacities for escape. On the other hand, this is less true for immunity brought about by anti-spike vaccination, since this reduces escape possibilities by targeting a single protein. In addition, some studies show that transmission of new variants is limited in healthy individuals, unlike in immunocompromised individuals. Astrazeneca and Moderna are currently testing their vaccines as adapted against Beta, and initial results suggest that they will be more more effective against other variants.

SARS-CoV-2 took us by surprise in its ability to generate variants with altered properties. These variants are, at the present time, still sensitive to immunity that we have quickly acquired naturally or by vaccination. Even though new mutations which will inevitably allow SARS-CoV-2 to adapt need to be carefully monitored, vaccines can significantly reduce the worldwide impact of COVID-19. 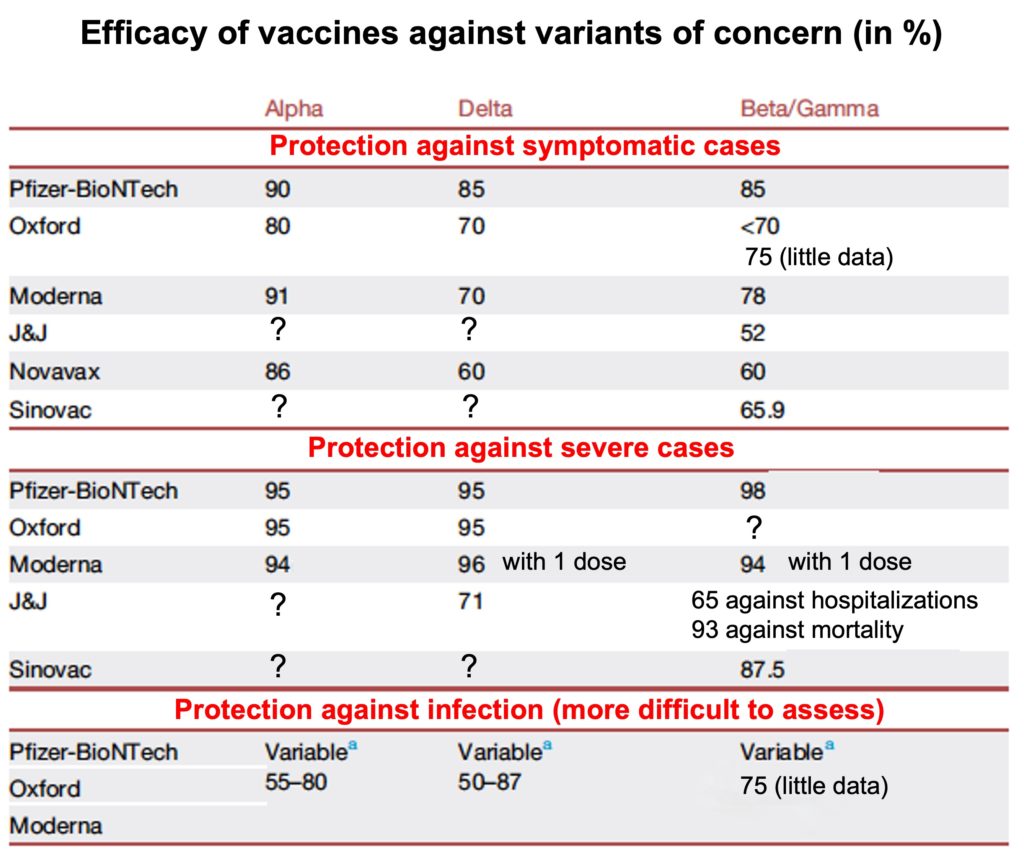