The COVID-19 pandemic continues to weigh heavily on our public health systems. Mass vaccination is one of the major factors in in helping to slow or halt the epidemic. However, in many countries, the supply of vaccines is a problem. The gap between 2 doses has had to be increased in order to be able to vaccinate a large proportion of the population quickly. The World Health Organisation (WHO) recommends a gap of between 8 and 12 weeks between 2 doses: data from clinical studies is based on this time-gap and results regarding the protection given appear satisfactory.

However, no data is yet available on the effectiveness of vaccines with a gap of more than 12 weeks between injections. Indeed, some countries that do not have supply problems are proposing to administer a 3rd dose in order to increase the length of protection (which is uncertain), and to reinforce immunity against emerging variants. The AstraZeneca vaccine, built on viral vector technology (a chimpanzee adenovirus modified so that it cannot replicate) is one of the most used vaccines across the world. Researchers at the University of Oxford have evaluated tolerance and immune responses after a delayed 2nd dose or a 3rd dose of this vaccine. 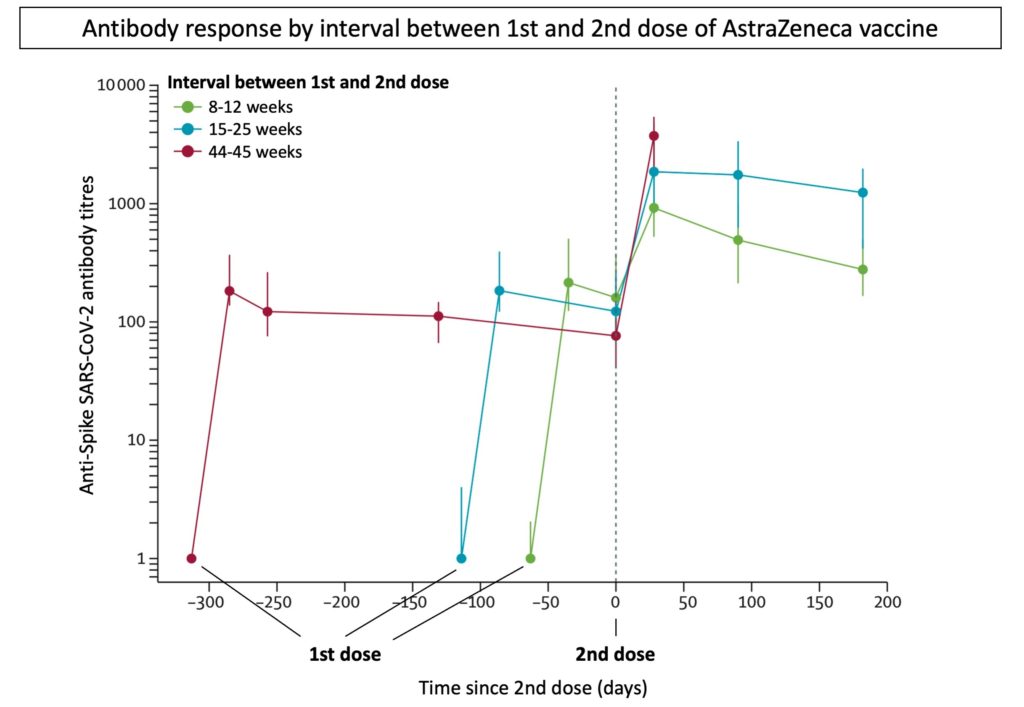 Firstly, the scientists analysed vaccine tolerance by listing any adverse reactions experienced by the participants. The 2nd and 3rd doses of the vaccine were less reactogenic than the 1st dose, since only 7% of people reported mild to moderate systemic effects after the 2nd dose, compared to 22% of people after the 1st dose. Similarly, only 5% of individuals reported reactions after a 3rd dose.

The scientists then evaluated immunogenicity (the ability of the vaccine to stimulate the immune system) after vaccination, analysing firstly the antibody (humoral) response. After a single dose, the anti-SARS-CoV-2 antibody response was high, and sustained (measured up to 320 days after vaccination). After a 2nd dose, the level of antibodies was similarly high (measured at 28 days after the 2nd dose), whether this was a delayed 2nd dose or given according to the recommended time gap. Administering a 3rd dose of the vaccine allowed the antibody response to be reinforced, making it significantly higher than after the 2nd dose, notably in those antibodies directed against variants, including Delta.

In conclusion, antibody levels after a single dose of the AstraZeneca vaccine progressively diminish, but remain stable after a year. A delay (up to 45 weeks) in the administration of the 2nd dose enables antibody levels to be increased in comparison to use of the conventional delay of 8 to 12 weeks. A 3rd dose increases antibody response significantly, in particular the humoral response against variants. Similar studies have been carried out for other current vaccines, notably the Pfizer-BioNTech and Moderna mRNA vaccines. 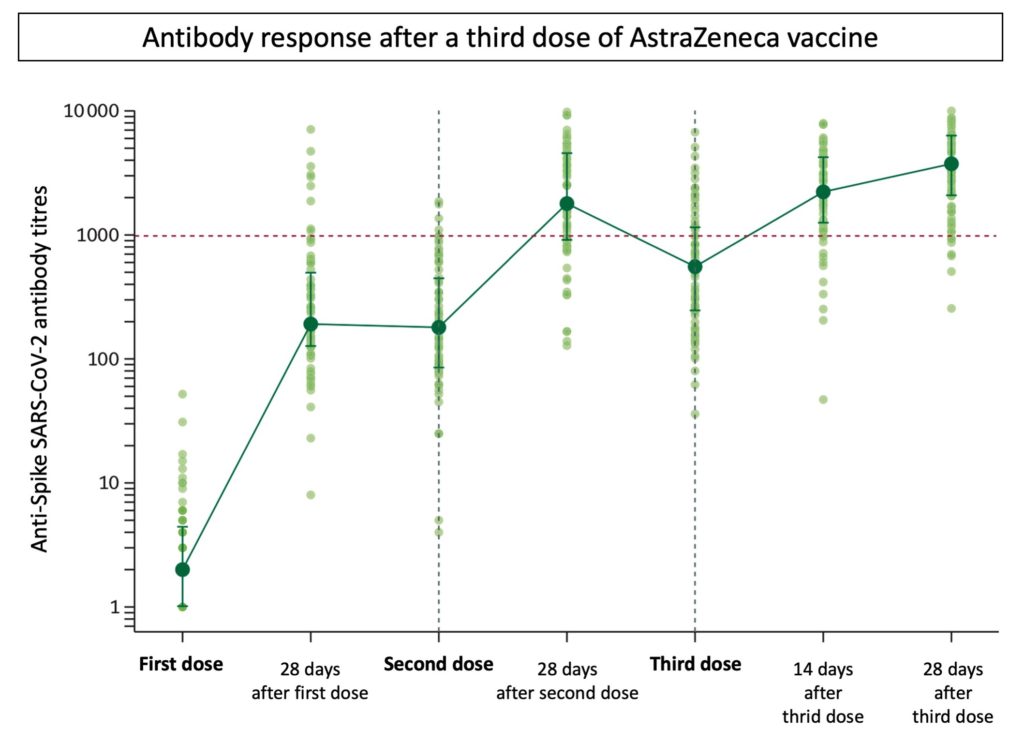 Amy Flaxman and coll. Reactogenicity and immunogenicity after a late second dose or a third dose of ChAdOx1 nCoV-19 in the UK: a substudy of two randomised controlled trials (COV001 and COV002). The Lancet, September 1, 2021.