The N439K mutation is spreading and is resistant to certain antibodies

Worldwide molecular studies have identified 330 000 SARS-CoV-2  viral sequences which have been collected and shared via the GISAID Initiative (ww.gisaid.org). This data is essential to observe the evolution of the pandemic and the emergence of new variants. Mutations appear within the spike protein, which interacts with the ACE2 cellular receptor to enable the virus to enter cells. The RBD domain of the spike protein is the target of neutralizing antibodies that can potentially protect an individual from reinfection.

Currently, the D614G mutation is the dominant strain worldwide and is not situated within the RBD (see the  23-29 November 2020 letter at news-COVID-19.info). It enables  the virus to be transmitted more efficiently but does not increase its pathogenicity (virulence) and does not help it to evade neutralizing antibodies. But other mutations currently circulating may prove to be more dangerous, such as the N439K mutation which is spreading and which is resistant to certain antibodies.

In order to confirm these points, British and American teams (at Glasgow University and Vir Biotechnology, San Francisco) characterized the spike mutations that allow it to bind efficiently with the receptor. Using sequences identified within GISAID data, as well as structural approaches and computer simulations, they established that the Receptor Binding Motif (RBM), a sub-domain of the RBD, is the zone within the spike protein that is most subject to variations. RBM has a certain structural plasticity, since about 2/3 of the amino acids (constituent elements of a protein) can undergo mutations without altering the ability to bind to the receptor.

The researchers then investigated the N439K mutation, which appeared independently in Scotland (March 2020) and in Romania (May), and which is today spread over 34 countries. According to their structural projections, this mutation allows the creation of a “salt bridge” (hydrogen + ionic bond) between the amino acid 439 and ACE2. It was shown using surface plasmonic resonance (SPR) that this spike mutation has 2 times greater affinity to the receptor. It is thought to have appeared to compensate for the effect of the K417V mutation which, when isolated, alters this interaction.

Subsequent sequencing of nasopharyngeal PCR samples was performed on 1918 Scottish patients. Amongst them, 406 were carriers of the N439K mutation, in addition to D614G, and showed no more or less severe clinical signs. In vitro testing of field isolates (GLA1 and 2) showed that the N439K virus does not grow more on the naturally occuring virus (non-mutated). In 442 patients cured of N439K mutant infection, a minority of blood antibodies did not recognize the spike and neutralized the mutant virus less effectively. This is also true for isolated and purified antibodies, of which some have been approved for urgent therapies. This mutation therefore enables evasion of certain neutralizing antibodies. 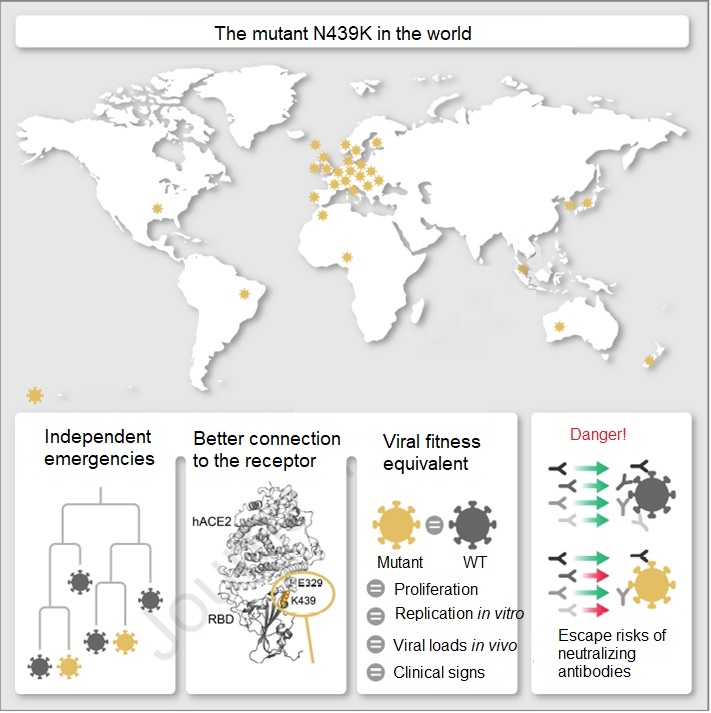 This work thus describes a model mutation, N439K, occurring in the RBM domain of the spike, which allows evasion of the antibody response by maintaining a strong bond with the ACE2 receptor. The mutant spread effectively, but with no enhanced ability to replicate and no increase in virulence. Its level remains quite low since it represents only 2% of SARS-CoV-2 sequences recorded worldwide on January 6, 2021.

This mutation might therefore serve as a monitor to follow the SARS-CoV-2 RBM antigenic drift. This domain is targeted by neutralizing antibodies  and so the chances of seeing escape mutants appear are high. Its structural plasticity may cause reinfections, but also result in the failure of vaccine strategies or therapeutic antibodies. Several variants of RBM are currently circulating and we must establish if they enable escape, or increased viral fitness (the capacity to reproduce), or heightened virulence.

Despite everything, if we look at the high number of people infected and its poor ability to mutate, SARS-CoV-2 is evolving slowly. The N439K mutation allows escape from only a minority of neutralizing antibodies, and several combinations of mutations are probably necessary to increase infectivity or to enable more efficient antibody evasion.

This pandemic will therefore probably be brought under control using current vaccines based on the original viral sequences. But when herd immunity is attained, there is a risk that numerous escape mutations will appear. In order to develop  vaccines and therapies that will work against escape, it is preferable that the antibodies target areas outside the RBM, or target the 1/3 of conserved amino acids found there. It would not be surprising if certain mutations enabled escape from cellular and innate immune response.