Different variants in a single patient

The SARS-CoV-2 spike protein enables the entry of the virus into the cell. Its RBD (receptor binding domain) is the principal target of neutralizing antibodies that block this mechanism. British and African researchers (at University College London, CITIID Cambridge, and AHRI Durban) studied the evolution of this protein in a man in his seventies, immunocompromised, with lymphoma treated with chemotherapy. He tested positive in a PCR test (day 1) and was admitted to hospital 35 days later for pneumonia linked to COVID-19. He was initially treated with the anti-viral drug Remdesivir, on days 41 and 54, then with plasma from a convalescing patient (“CP”, an experimental treatment containing anti-SARS-CoV-2 antibodies) on days 63, 65 and 95, before his death on day 102 from multiple organ failure caused by hyper-inflammation. He tested positive during the whole of this period during which 23 samples were taken from his upper respiratory passages. The virus was sequenced to study viral populations using several methods (including deep-sequencing).

But did this patient have only one version of the virus? When researchers took samples from his home environment (telephone, doorbell), they identified the strain at the origin of the infection: cell line 2OB, spike mutation D614G (see the News-COVID-19.info letter of  November 23-29 2020). From day 54, after treatment with Remdesivir, researchers observed the appearance of a weak  tendency towards diversification: variants appeared, attained a majority, and were then replaced by others. Mutations appeared on the spike protein as well as in other places in the viral genome. But between days 66 and 82 (after two treatments with CP), diversification accelerated, with a dominant variant bringing D796H and H69/V70 mutations to the spike, outside the RBD (double mutation). Between days 86 and 89, CP antibody levels decreased and the dominant variant was then carrying the Y200H and T240I spike mutations. On day 93, the dominant variant was P330S, and the previous variants had fallen into the minority. But during treatment by CP (day 95), the double mutation become dominant again. There is, therefore, competition between this variant, positively selected by CP, and other forms of the virus. 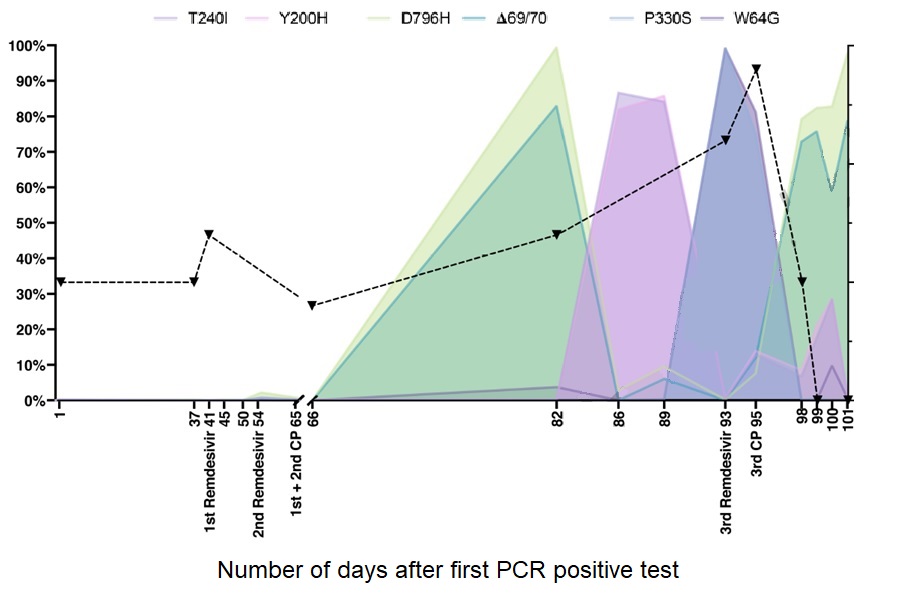 Using in vitro testing, the researchers set out in detail the role of the 2 spike mutations that are not found in the RBD. It seems that the D796H mutation lessens infectivity, but allows evasion of neutralizing antibodies (from the CP and from the patient), whereas the H69/V70 mutation increases infectivity, probably by way of compensation. By testing 19 known and categorized neutralizing antibodies, researchers showed that only antibodies that do not target the RBD are effective against the D796H mutation.

This case clearly shows how selection pressure from the antibodies used in treatment determines the evolution of SARS-CoV-2 in an immunocompromised patient. These mutations are not isolated since the H69/V70 mutation is currently circulating and D796H represents 0.02% of global sequences. What has been described here is unlikely to occur in an immunocompetent patient, but does raise the question of how to treat immunocompromised patients, and which health recommendations are inappropriate in their situations.