Manaus is one of the most affected cities in Brazil. Despite having reached levels of infection where herd immunity should occur (see News-COVID-19.info letter December 14-20 2020), it nevertheless succumbed to a second wave in December 2020. As a consequence, 31 samples were taken in order to try to understand the resurgence of the pandemic; amongst these, 13 turned out to be a new strain of SARS-CoV-2, called P.1.

Brazil is not the only country where variants have occurred. Last December, a new variant, B1.1.7, was identified in the United Kingdom, and is more contagious than the original SARS-CoV-2 virus. However, its contagiousness is not the main problem. It is more the possibility that it may evade immune system responses, making reinfection possible and reducing the effectiveness of current vaccines.

Unfortunately, these are not the only 2 current variants. In South Africa, the 501Y.V2 variant has appeared. Several mutations in its genome (called K417T, E484K and N501Y) have led to a modification of the domain which binds to the ACE2 receptor, necessary for cell infection. This modification of the surface protein and in particular the E484K protein, may allow the virus to evade immune system reponses. Our antibodies, which constitute our first line of defense, may not be able to recognize this new variant.

What are the possible consequences of these new variants? It is difficult to know. The Brazilian P.1 (K417N, E484K, N501Y) variant may have nothing to do with the virus’ resurgence in Manaus; it may be that the population’s immunity is weakening. Or it may simply be that the virus has become more virulent, as with the B1.1.7 variant, without it being capable of immune system evasion. And these two explanations are not the only possibilities.

There are several questions to be answered, and new studies are taking place. Current research on the mutations of these different variants suggest that they emerged independently, as a result of increasing infection levels in the population.

However, it has been possible to identify one mutation that is common to all these variants, called N501Y or, more informally, Nelly. This mutation helps SARS-CoV-2 to bind to the ACE2 receptor but does not seem to make it more dangerous.

For the moment, the possibility of the virus becoming resistant to vaccines that have already been developed has not been dismissed. It is therefore important to have an effective vaccination strategy, so as to avoid boosting the evolution of these emerging variants. For example, the United Kingdom has decided to extend the period between the first and second doses of the vaccine to 12 weeks, instead of the 4 weeks recommended by clinical studies, in order to allow more people to obtain a first dose and thereby to develop an initial, though partial, immunity. In the United States, all ordered doses have been distributed. However, this does mean that those 50% of vaccines, intended to be used for the second dose, have not been kept back, which could be risky if stock shortages occur. 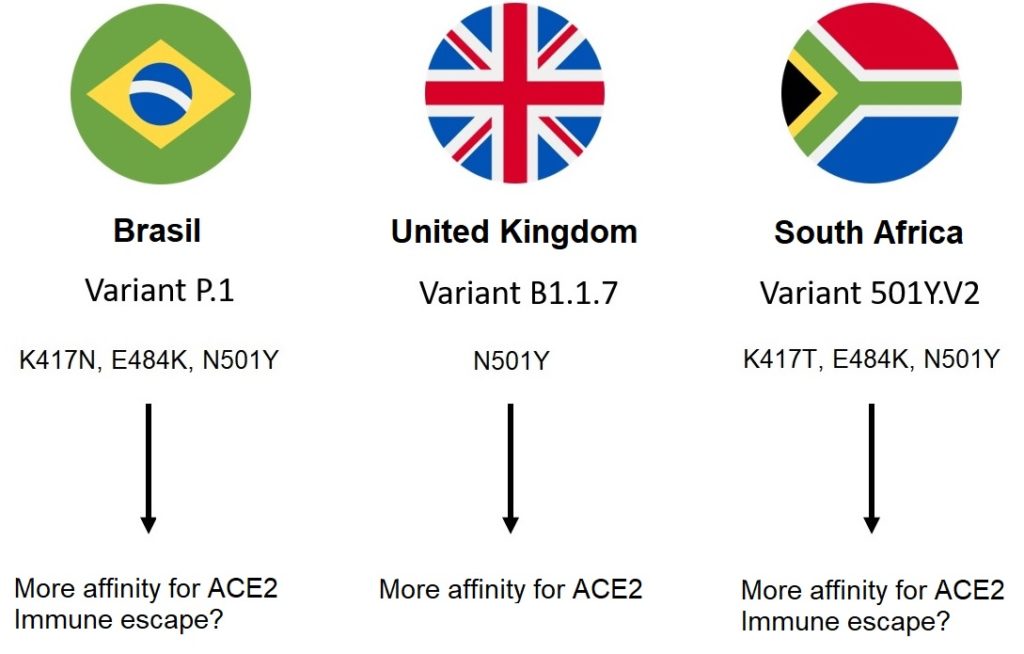 In the past, very few viruses have evolved so as to become resistant to their vaccines, with the exception of flu, which changes so rapidly that a new vaccine is created each year. If this were to be the case with SARS-CoV-2, modification of existing vaccines would be necessary, and although several of them can be modified quite easily, the question of their renewed authorization for use remains an issue.