Non-conventional viral peptides presented at the surface of infected cells

Several studies have shown that the T response (cellular immunity) is vital to immunity and to the elimination of SARS-CoV-2. In the pathophysiology of COVID-19, it is therefore imperative to better understand how infected cells interact with the immune system.

The infected cell has viral antigens (protein fragments recognized by antibodies) at its surface revealed by the HLA-I complex (class I Human Leukocyte Antigen), which allows it to be recognized by cytotoxic T cells (CD8+) before they eliminate it. However, studies aiming to identify these antigens are in the main based on predictive computer modelling, which finds it difficult to quantify the multiple preceding biochemical stages, the hijacking of cellular functions by the virus, or the dynamic aspects of the infection. Identification of this repertoire (immunopeptidome) would help us to better understand the anti-SARS-CoV-2 T response.

American researchers at the Massachusetts Institute of Technology and the University of Harvard have recently characterised this repertoire for the first time. They infected 2 cell lines (A549 and HEK293T) with SARS-CoV-2 and the peptides presented at their surfaces by HLA (9 alleles tested) were identified by mass spectrometry at different times after infection (immunoprecipitation of HLA-I complexes). In addition, they also analysed all the purified proteins (proteome)  as well as the expression of messenger RNA molecules (transcriptome).

Amongst the thousands of peptides that were identified, 36 were viral and mostly non-structural (Non-Structural Proteins NSP1/2/3/5/8/10/14/15, S, M, ORF7a, N), with 9 deriving from an ORF (open reading frame) non-canonical (frameshifted) in the spike (S.iORF1/2) and nucleocapsid (ORF9b) gene. The N peptides, known to be the most expressed after infection, were poorly presented by HLA-I (a single peptide). Although the ORF9b is short (97 amino acids), it alone produced 6 peptides that binded in vitro to 4 HLA-I alleles (A*02 :01, B*18 :01, B*44 :03, A*26 :01). The HLA-I complex tends to present viral proteins early, 3 hours after infection. In the infected cells, inhibition of the presentation of HLA-I peptides (depletion of the POMP chaperone protein), of ubiquitination, and of the innate response (interferon pathway) was observed. This suggests that SARS-CoV-2 alters the antiviral response by attenuating the presentation of viral antigens.

Surprisingly, these non-canonical peptides are very immunogenic when administered to mice or to COVID-19 patients (ELISPOT tests). Two peptides, A*02 :01, are capable of causing a T cytotoxic response in convalescent patients. The ELPDEFVVVTV peptide is promising since it binds to 2 HLA-I alleles (A*02 :01 and A*26 :01)  and brings about a robust T response (stronger than that reported in the scientific literature) when patients express the same CDR3 pattern of immunoglobulins. The peptides deriving from S.iORF1/2 do not cause a T response, which is probably due to a mechanism of escape from the immune system.

During the immune response, the NSP is therefore an integral part of the T response. In addition, 25% of the viral antigens presented by the HLA-I are non-canonical. This indicates that studies on the anti-SARS-CoV-2 T response omit a significant portion of viral antigens since they concentrate on the canonical ORF. Unlike the antibody response, the T cytotoxic response is not circumvented by current variants. Integrating these peptides into the design of vaccines may therefore provide effective and long-lasting protection against the appearance of escape variants. Current vaccines, which use codon optimization to increase protein expression, are deprived of many viral antigens and the cytotoxic T response is therefore altered. Other clinical studies will be necessary to better understand the role of non-canonical peptides in COVID-19. 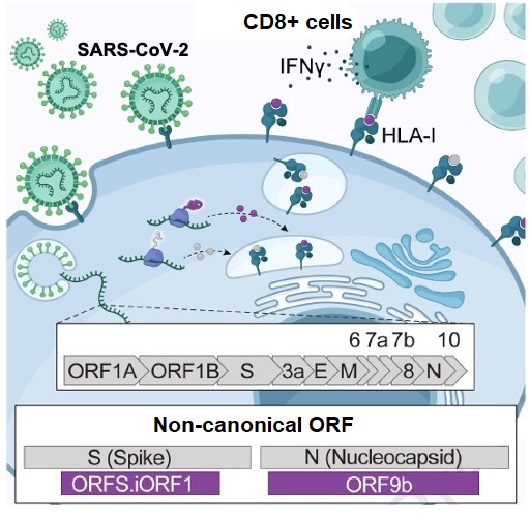