Antibodies that could worsen the illness

The spike (S) surface protein of SARS-CoV-2 is the main protein embedded in the virus’ envelope. On its surface we find different domains, notably the RBD (Receptor Binding Domain) and the NTD (N Terminal Domain). The RBD binds with the ACE2 cellular receptor to enable the virus to enter the cell. Patients infected by SARS-CoV-2 react by producing antibodies against the RBD, which allow infection by the virus to be blocked. But the antibodies do not always protect against infection. On the contrary, some of them facilitate the entry of viral particles, as has been described in the case of dengue fever. Japanese researchers at the University of Osaka have recently identified antibodies directed against the S protein which may facilitate infection and make the illness worse.

The researchers analysed the monoclonal antibodies directed against the S protein in patients infected by SARS-CoV-2. The majority were targeting the RBD and allowed blockage of the link between the S protein and the ACE2 receptor. But they also discovered a sub-population of antibodies targeting the NTD, heightening binding between the S protein and the ACE2 and thereby facilitating infection and increasing viral infectivity. By carrying out mutational and structural analyses using electron microscopy, they also observed that all the antibodies facilitating infection recognise the same epitope (the region targeted by the antibodies) in the NTD and bind to it in the same way. By measuring levels of neutralising antibodies and those that enhance infection in patients, the scientists observed a correlation with the severity of illness: these 2 types of antibodies are produced by all infected patients, but levels of antibodies enhancing infection are higher in severe cases of COVID-19. In addition, when levels of neutralising antibodies are high, those that facilitate infection are unable to function.

It is therefore necessary to check that vaccination does not increase production of antibodies enhancing infection, even if the vaccines developed do not target the epitopes of these antibodies in the NTD region. 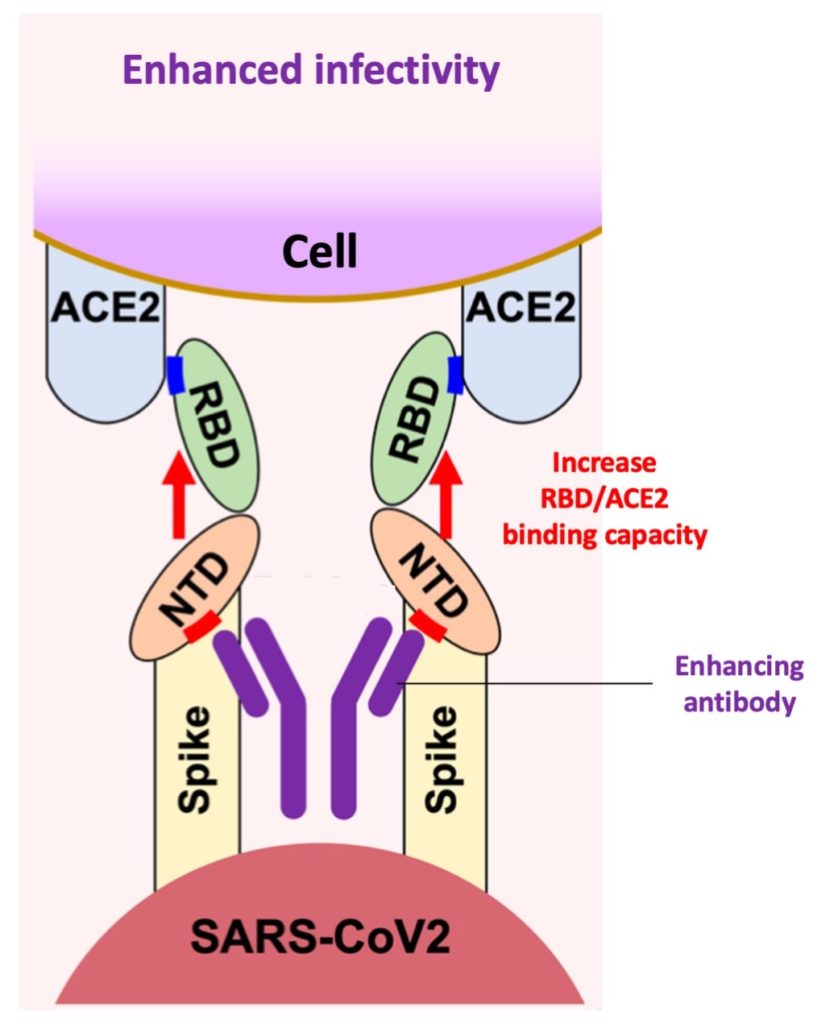 Yafei Liu and coll. An infectivity-enhancing site on the SARS-CoV-2 spike protein targeted by antibodies. Cell, May 24 2021.