Mutations of SARS-CoV-2 occur at an average of 1-2 per month. The majority of these mutations are not worrying, but some of them can have serious consequences. They may, for example, make the virus more easily transmissible or give it greater capacity to evade immunity conferred by vaccination. The first variant giving cause for concern was identified in the spike (S) surface protein at the start of the epidemic. This was the D614G mutation (a glycine amino acid replaced an aspartic acid). This variant become the majority variant worldwide in June 2020 (see the News-COVID-19.info letter of  November 23-29 2020). Other worrying mutations were subsequently discovered, such as the N501Y  mutation situated in the S protein and present in several variants such as the “UK” (N501YV1), “South African” (N501YV2)and “Brazilian” variants (N501YV3) (see the News-COVID-19.info letter of January 25-31 2021). The UK variant, characterised by 17 mutations of which 8 are within the S protein, could be 50% more transmissible. It became the majority variant in London and in the south of England in less than 3 months. On the 11 January, this variant had been detected in 49 countries across Europe, Asia and America (see the News-COVID-19.info letter of ).

The most effective measures to control the spread of this variant are those which inhibit its transmission in the community (wearing masks, closing non-essential businesses, testing, isolating infected individuals…). The closing of schools is considered to be a last resort. According to the most recent studies, children younger than 10 seem to have a much lower susceptibility to infection than adults. In addition, prolonged closure of schools has serious consequences on the physical and mental health of children (malnutrition, domestic violence …).

Monitoring these variants by sequencing the genome of the virus circulating in the community is essential in order to anticipate changes in virus circulation dynamics. “COVID-19 Genomics UK” is one of the best examples of collaboration between government, public institutions and private UK laboratories to allow surveillance of variants. Unfortunately, this type of surveillance has not been set up in all countries, for various reasons such as the lack of infrastructure, expert knowledge or political will. 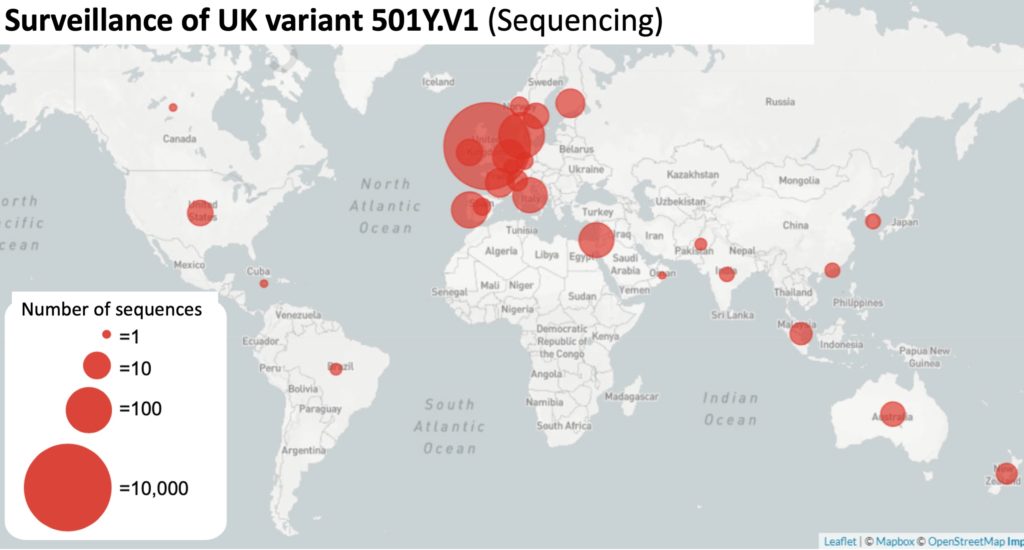 As the pandemic evolves, new variants will continue to appear. It is therefore essential that agreements and cooperation between countries be put in place, for sharing of sequencing data so that variants can be monitored, but also to set up global initiatives to control the spread of these new variants.