Moderna and Pfizer-Biontech vaccines against the Delta variant in Qatar

In Qatar, the SARS-CoV-2 Alpha variant and then the Beta variant, were at the origin of two major epidemic waves at the beginning of 2021. It was later, in March, that the Delta variant was detected. It then spread throughout the country and was responsible for 43% of infections up to September. However, the vaccination campaign in Qatar, which began in December 2020, had been effective, since by September 2021, around 80% of the population were fully vaccinated with either the Pfizer-Biontech or the Moderna vaccines.

Qatari and American researchers (at the Cornell Universities of Doha and New York) carried out a study aiming to evaluate the efficacy of these two vaccines in real conditions. Unlike in studies carried out on random samples of people or studies of cohorts, in this case it was those patients that tested negative for SARS-CoV-2 (after a PCR test) who were used as a control group. The study was based on clinical (PCR tests, vaccinations, hospitalisations) and demographic data from the period of March to September 2021, which was then centralised and stored on a digital health platform belonging to the Hamad Medical Corporation, a public structure reputed for its COVID-19 care work.

The researchers focused on samples taken 14 days (or slightly longer) after each of the two injections, separated by 3 weeks. The results showed that the efficacy of the Pfizer-Biontech vaccine against infection by Delta is only 45,3% after the 1st injection and 51,9% after the 2nd. In contrast, these figures were 73,7% and 73,1% respectively for Moderna. After 2 doses, protection against asymptomatic and symptomatic cases was, respectively, 46% and 44,4% for Pfizer, and 53,6% and 73,9% for Moderna. However, after the 2nd dose, efficacy against severe, critical and fatal cases was 93,4% for Pfizer-Biontech and 96,1% for Moderna. After a single dose, these figures are approximately 80 and 87%. It was also noted that efficacy is reduced several months later, an indication that vaccinal protection reduces with time. Concerning the Beta variant, efficacy against infection after 2 doses was 74,3% for Pfizer-Biontech and 80,8% for Moderna. Efficacy of the 2 vaccines against severe and fatal cases was higher than 90%.

The Pfizer-Biontech and Moderna vaccines therefore give comparable, effective protection against severe and fatal cases caused by Delta. However, their efficacy against infections is more limited, especially for Pfizer-Biontech. This is not necessarily due to the capacities of Delta to evade immunity, but rather to the fact that vaccinal protection against the variant diminishes with time, and vaccinated individuals tend to be less observant of social distancing, and less vigilant in general. It should be noted that the population of Qatar is very young (only 9% of the population is older than 50) and therefore has relatively low levels of comorbidities and severe cases. In addition, the efficacy of protection against infection can vary from study to study (figures are quite low in this study), according to levels of vaccination in the population at the time when Delta emerged in the country. This study emphasises that it is necessary to study vaccinated sectors of the population more closely in order to better understand how immunity weakens, but it is also necessary to find standardised norms to estimate vaccine efficacy. 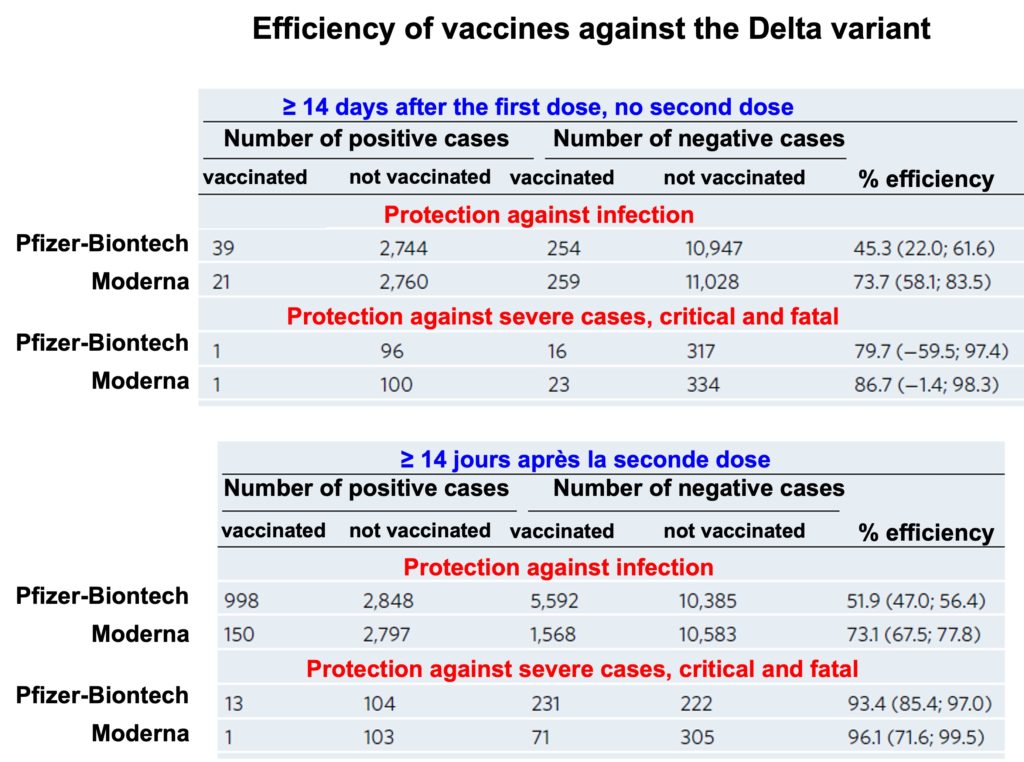