Simultaneous vaccine against COVID-19 and flu

Vaccination against SARS-CoV-2 has enabled the prevention of numerous cases of COVID-19, and numerous deaths. But this process of mass vaccination takes its toll on health systems since it involves many health professionals. In several countries, vaccination against COVID-19 is given at the same time as vaccination against winter flu. This latter is important since there will probably be a good deal of flu in circulation this winter and this may substantially add to the toll of waves of COVID-19. The workload for health professionals would be significantly reduced if both vaccines could be given simultaneously. However, the international recommendation is that an interval of 2 weeks should be left between the injections, mainly because there is insufficient data available and because there is no wish for side effects caused by the flu vaccine to be attributed to the anti-COVID-19 vaccine. Researchers at the University of Bristol (United Kingdom) have investigated the safety and the immunogenicity of simultaneous administration of an anti-COVID-19 vaccine (AstraZeneca or Pfizer-BioNTech) and a flu vaccine (inactivated virus).

In total, between the 1st of April and the 26th of June 2021, 679 participants were involved in this study, 340 having received the 2 vaccines simultaneously and 339 having received the 2nd dose of the COVID vaccine plus a placebo. This study was multi-centric (patients from several centres in the UK), randomised (a vaccinated group compared to a placebo group) and was double blinded (neither the patient nor the doctor knew if a vaccine or a placebo had been given).

What were the conclusions? With regard to side-effects, they were similar: 77% of individuals who had been given the 2 vaccines simultaneously said they suffered from side-effects, against 75% of people who had been given only the COVID-19 vaccine. However, it should be noted that in 2 of the 6 groups, these side-effects were 25% worse in the case of simultaneous injections, but this figure was judged to be acceptable by the researchers. In all the cohorts, the side-effects were predominantly slight to moderate, and mainly involved tiredness, headaches and muscular pains. 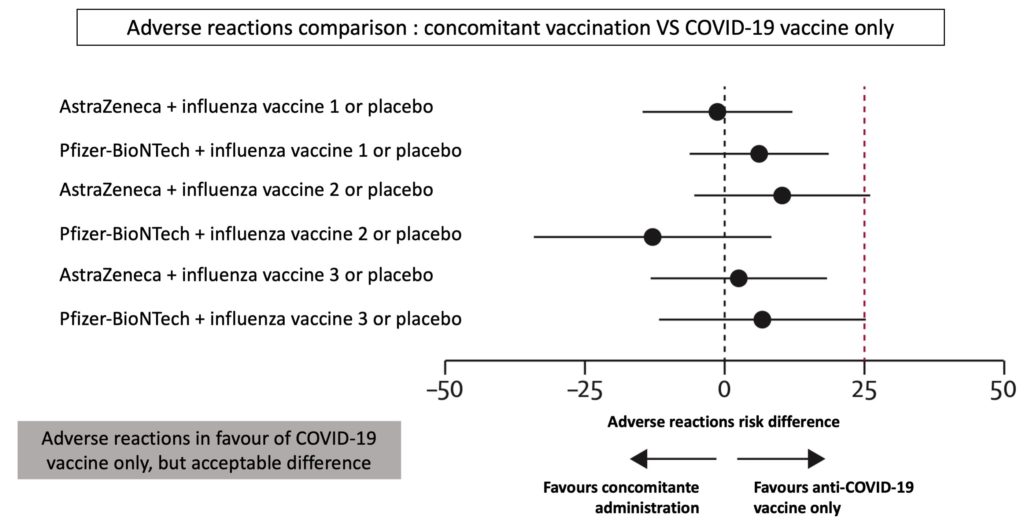 Regarding the efficacy of the vaccines, the scientists measured levels of antibodies directed against SARS-CoV-2 and of antibodies directed against the flu virus. Antibody levels were similar in the groups that had received the vaccine against the flu, or the placebo; even though levels of anti-SARS-CoV-2 antibodies were slighter lower after simultaneous injection of the 2 vaccines, this difference is not significant.

In conclusion, this study, carried out in the UK, showed that simultaneous injection of the COVID-19 vaccine and the influenza vaccine does not present a safety problem and preserves the effectiveness of both vaccines. These tests were representative of the overall population since they did not exclude pregnant women, people with medical problems or immunocompromised individuals. In addition they took into account the 2 most widely administered COVID vaccines in England. It is important to note that unlike in England, the 3 flu vaccines available in France are quadrivalents and without adjuvants. In France, the HAS (Haute Autorité de Santé) has approved the simultaneous administration of the 2 vaccines. This limits the workload of health care staff and allows more people to be vaccinated against the flu.

Rajeka Lazarus and coll. Safety and immunogenicity of concomitant administration of COVID-19 vaccines (ChAdOx1 or BNT162b2) with seasonal influenza vaccines in adults in the UK (ComFluCOV) : a multicentre, randomised, controlled, phase 4 trial. The Lancet, November 11, 2021.