The efficacy of the vaccine against Delta

The Pfizer-BioNTech mRNA vaccine protects against infections, hospitalisations and severe cases of COVID-19. It reduces viral load and therefore reduces the infectiousness of the individual, thus hampering the virus’ spread. In Israel, SARS-CoV-2 had been largely eradicated between April and June 2021, but then the epidemic began to progress again. Israel, in common with other countries, therefore decided to recommend a 3rd “booster dose” for people vaccinated at least 5 months ago, beginning with the oldest segment of the population.

We do not know if this increase in the epidemic was due to the arrival of the Delta (Indian) variant or to the weakening of vaccinal immunity over time. To clarify this point, Israeli researchers, from the Israel Institute of Technology and the  University of Tel-Aviv, retrospectively analysed 16 553 positive PCR tests dating from the period from June to September 2021, during which time the Delta variant was dominant. Amongst the individuals concerned, 3 100 had not been vaccinated, 12 934 had received 2 doses (Pfizer-BioNTech) and 519 had received a 3rd dose. PCR tests focus on the genes of the viral polymerase (RdRp), the nucleoprotein N and the glycoprotein of the envelope E. By applying linear regressions adjusted according to sex and age, the results show that the Pfizer-BioNTech vaccine is effective for 2 months following the 2nd injection, since it reduces the viral load brought on by Delta 10-fold. However, this effectiveness declines from the 3rd month onwards and becomes negligible at 6 months, since individuals then start to reach levels of viral load comparable to unvaccinated people. However, with a 3rd dose, the viral load is reduced 5-fold.

This study explains why many vaccinated individuals have been infected with the Delta variant in Israel: the protection endowed by the Pfizer-BioNTech is effective for a limited time (from 2 to 3 months). Although the vaccination campaign was extremely effective in the country (50% of the population were inoculated in less than 3 months), the Delta variant arrived when protection in general was declining. A 3rd dose given 5 months after the 2nd will restore effectiveness, but we do not yet know for how long. It should be noted that this study needs to be confirmed since positive PCR tests do not necessarily correlate with contagiousness. We also do not know if these patients were symptomatic or not, and socio-behavioural data is not available. In conjunction with mask-wearing and social distancing, booster jabs may help curb the COVID-19 pandemic. 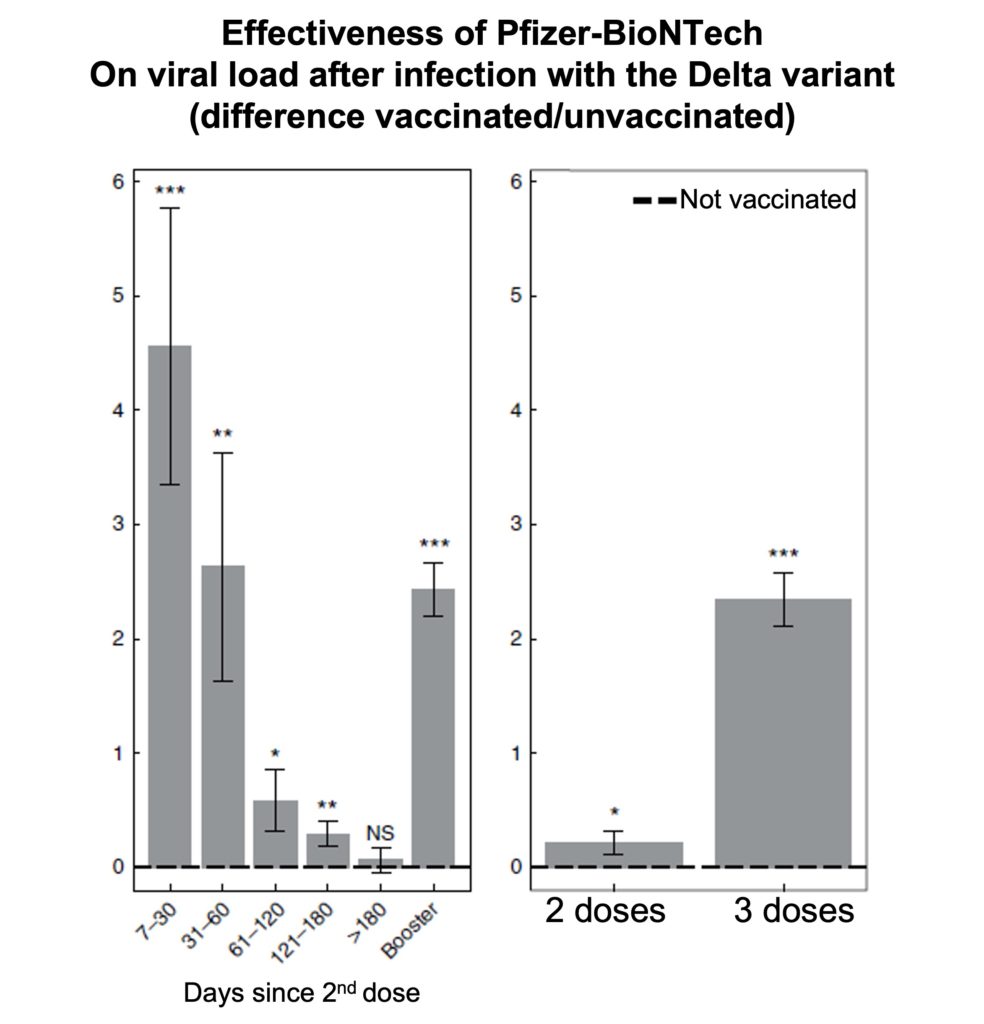