Researchers have recently identified the areas on the spike protein that antibodies can fix themselves to. A judicious choice of antibodies should allow them to be used in prevention or treatment.

It must be remembered that the SARS-CoV-2 spike protein is of central interest for the development of vaccines and antibody therapies. In order for SARS-CoV-2 to infect a cell, the spike viral protein must interact with the ACE2 receptor which is expressed in numerous tissues including the mucous membranes of the respiratory tract.

We knew already that the spike consists of two domains: S1 contains the RBD (Receptor Binding Domain) which binds with the ACE2, while S2 governs the membrane fusion. The spike possesses a dynamic structure which undergoes changes in the course of the entry process, passing from a pre-fusion state to a post-fusion state (see newsletter News-COVID-19.info). The SARS-CoV-2 spike is relatively close to that of SARS-CoV (76% homology) but hardly conserved in MERS-CoV and seasonal coronaviruses (20%). This explains why antibody cross-reactions are limited between these strains. The most effective neutralizing antibodies (which block the entry of the virus into the cell) target the RBD and prevent interaction with the ACE2, but they can also destabilise the pre-fusion state. In the fight against COVID-19, it is essential that we better understand the mechanisms and the precise targets of the protective antibodies.

What more do we know now?

Researchers at the University of Oxford recently characterized the fixation of 377 antibodies from 42 convalescent patients onto the spike protein. Their sites and linking modes were determined by a combination of classical approaches (ELISA) with biophysical and structural approaches (crystallography, cryo-electron microscopy, and biolayer interferometry BLI). Half of these antibodies recognise the SARS-CoV spike, but less so the spikes of other coronaviruses (1 to 7% depending on the strains). Amongst these 377 antibodies, 80 targeted the RBD of SARS-CoV-2, and their binding sites were divided into 5 groups.

If we compare the spike to the human body, the ACE2 would be found at the neck, with 4 other groups situated at the left shoulder, the neck, the right shoulder and on the right flank. The left flank group is different since it does not show any competition effect for binding with the ACE2.

The effectiveness of antibody neutralization was determined by in vitro experiments with infection. Amongst the antibodies with the strongest neutralizing capacities, 19 targeted the RBD and acted by blocking binding with the ACE2. Curiously, other antibodies have different neutralization mechanisms that we do not understand, such as that of mAb 159, which targets the spike’s N terminal.

The 19 others target 2 sites situated between the neck and the left shoulder, round the E484-F486 region. The neutralization sites are therefore less dispersed than the binding sites. This area is important since the F486L mutation was previously linked with human-mink species barrier crossing, and the E484K mutation is present in the South African (B.1.351) and Brazilian (P.1) variants. In 17,5% of these antibodies mutations have been observed allowing glycosylations (N-glycans) in the variable region, which improves neutralization but not binding. The enhanced properties of these antibodies correlate with their attachment to the spike’s pre-fusion state, but we do not know the reasons for this mechanism. For instance, the most powerful antibody (mAb 384) uses a very particular mode of binding, different from the others and not reported in scientific literature so far. Even common fixation modes do not require the variable part of antibodies (the part that attaches itself to the target) since some lose their neutralization potential when reduced to the Fab fragment (the antibody amputated from its tail and its bivalent function). On these structural bases, the researchers showed in vitro that in making a sound choice of antibodies, and then  combining them, neutralization capacity can be increased ten-fold.

This can be represented as follows: 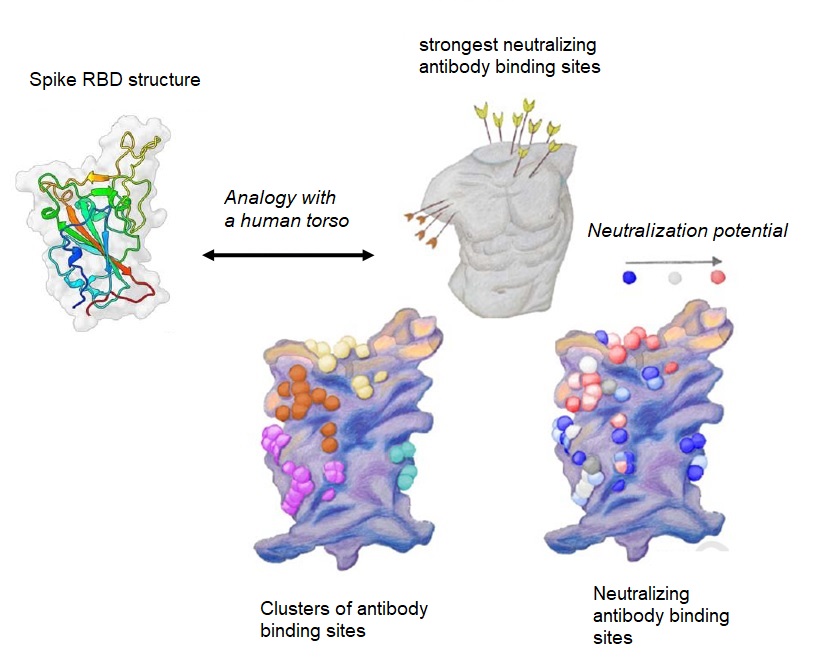 Finally, they tested their antibodies on a model of transgenic mice expressing the human ACE2 receptor. When the mAb 40 or 88 antibodies are administered  before the mice are infected with SARS-CoV-2, they are protected from weight loss, respiratory distress and high viremia (reduced by 10 000 times). When the mAb 40, 88, 159, 384 and 253H55L antibodies are administered one day after infection, the mice are still protected but with more variable effectiveness (up to a 100-fold reduction).

In addition to providing precious information on SARS-CoV-2 neutralization, the competitive mapping method developed here may also allow choices in combinations of antibodies during treatment, which could be more effective against the different variants than current treatments (see the following article by the same authors).