SARS-CoV-2 principally causes respiratory problems of different levels of seriousness, but other symptoms involving cardiac or renal problems have already been observed. In order for successful infection to take place, the virus uses certain cell components that are still little known due to the lack of suitable models. Up to the current time, research has involved using non-human cell lines or modified human cells that do not give an accurate picture of the natural process of infection.

In order to infect a cell, the virus’ spike (S) surface protein binds with the ACE2 cellular receptor. Physiologically, this receptor plays a role in the renin-angiotensin system, a mechanism that regulates arterial pressure. The ACE2 receptors present on the surface of the cells can be cleaved by cellular proteases to release active soluble forms of the receptor into the plasma (sACE2). The lung cells are the principal targets of the virus, but only a small part expresses the ACE2 receptor on its surface. Researchers at the University of Hong Kong recently showed the importance of circulating sACE2 in the infection of cells by SARS-CoV-2.

The researchers first selected HK-2, a human kidney cell, from 11 cell lines deriving from different organs, as the most sensitive to SARS-CoV-2 infection. Using this cell model, suitable for studying the interactions between the virus and host factors, they identified cellular factors essential to virus replication. These factors seem to be involved in cytokinesis (one of the phases of cellular division), in the transport of vesicles in the cell and in the endosomal system (endosomes are membrane vesicles in the cell cytoplasm).

It also appears that vasopressin, an antidiuretic hormone that enhances the reabsorption of water into the body by its actions at the renal level, plays an important role in SARS-CoV-2 infection. The researchers were able to confirm interactions between vasopressin, the sACE2 receptors and the S protein of SARS-CoV-2. These 3 elements seem to take the form of a complex in which the sACE2-S protein interaction is enhanced by vasopressin. This complex is then internalized in the cell via the vasopressin cell receptor, known to be involved in vesicular trafficking and in the endosomal system. These first results may therefore point to a potential entry mechanism for SARS-CoV-2 into cells using the endocytic pathway: when the sACE2-S protein complex is formed, it could penetrate into the cell by endocytosis via the AT1 receptor. When the complex is completed by the vasopressin, entry by endocytosis would be via the AVPR1B receptor. The researchers then showed that reducing the quantity of the sACE2 receptor reduces infection by the virus, suggesting that targeting secretion of ACE2 may modify SARS-CoV-2 infectivity. 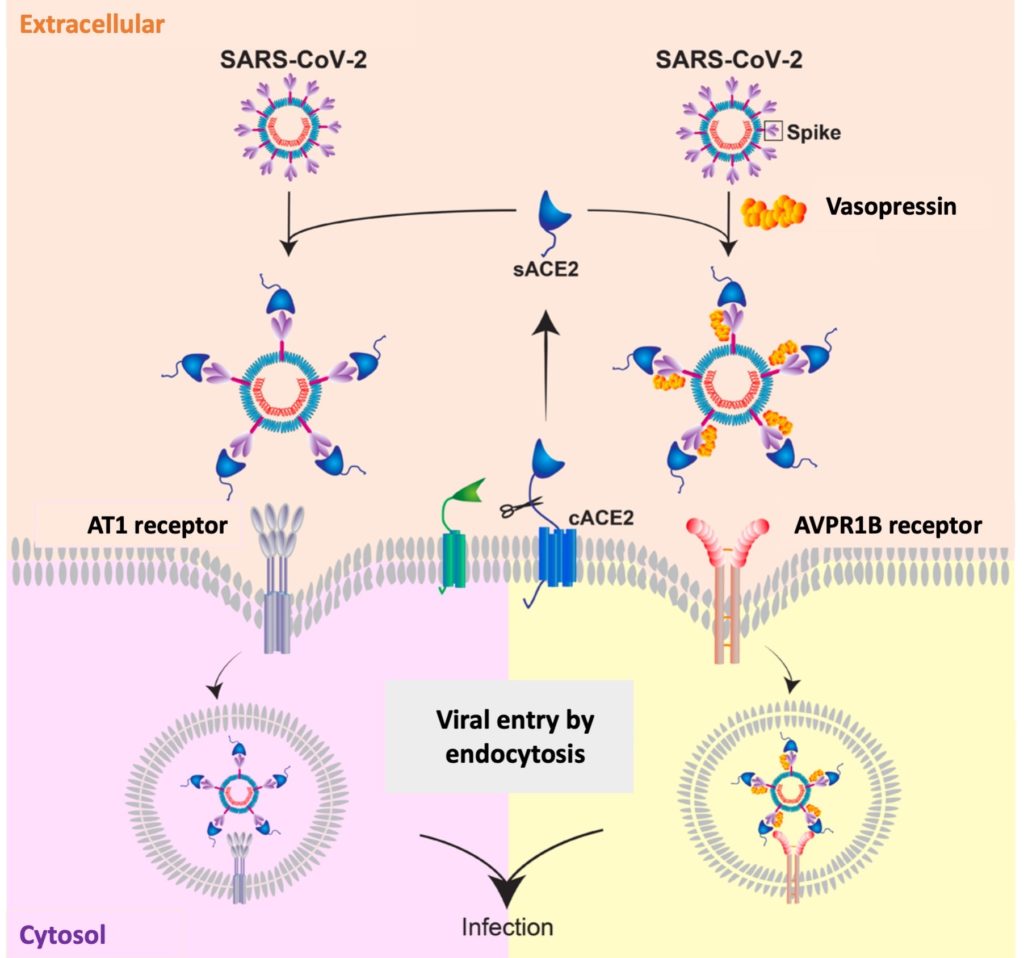 The cellular elements necessary for infection by SARS-CoV-2 could be interesting targets for new treatments, notably in combination with existing drugs, and in particular for preventing the appearance of new resistant mutations. The interaction between the sACE2 soluble receptor and the virus may play a determining part in cell infection. The use of recombinant sACE2 receptors may result in a decrease in cell infection by SARS-CoV-2. However, since the model used is a kidney cell line, these results need to be validated on lung cells, which are the main targets of the virus.