In what state are the lungs of severely ill COVID-19 patients?

The severity of COVID-19 is due to an inflammatory syndrome caused by over-activation of the immune system, reacting against its incapacity to eradicate the virus. This over-inflammation causes lung damage which brings about respiratory distress and a change in the blood’s immune profile and in the level of lung alveoli. There is excessive activation of the neutrophil polynuclear cells, decreased lymphocytes (lymphopenia) and an aberrant response of the adaptive immune system. Researchers at the Weill Medical College, New York, USA, have analysed the damage caused to the pulmonary tissues and the associated immune response as the disease worsens.

The researchers studied a cohort of 10 patients affected by severe respiratory distress caused by the coronavirus, comparing them with other cases of respiratory distress due to other infections (flu, bacterial infections, etc.). In order to quantify the tissue pathology associated with infection, they performed post-mortem mass cytometry imaging on the lungs to identify damaged cell types. They also carried out a histological analysis, analysing a total of 664 006 cells.

It appeared that in severe cases of COVID-19, the number of pulmonary epithelial cells greatly decreased in favour of fibroblasts and mesenchymal cells. The researchers observed a reduction in alveolar spaces and a significant infiltration of immune cells (notably macrophages) but in the same proportions as in other infections.

In the lungs, the cells infected by SARS-CoV-2 are principally endothelial cells but also macrophages and neutrophil polynuclear cells. The scientists were also able to observe that at the beginning of the illness the inflammatory response is directed against SARS-CoV-2. Later, however, this is not the case: it becomes excessive and aberrant. 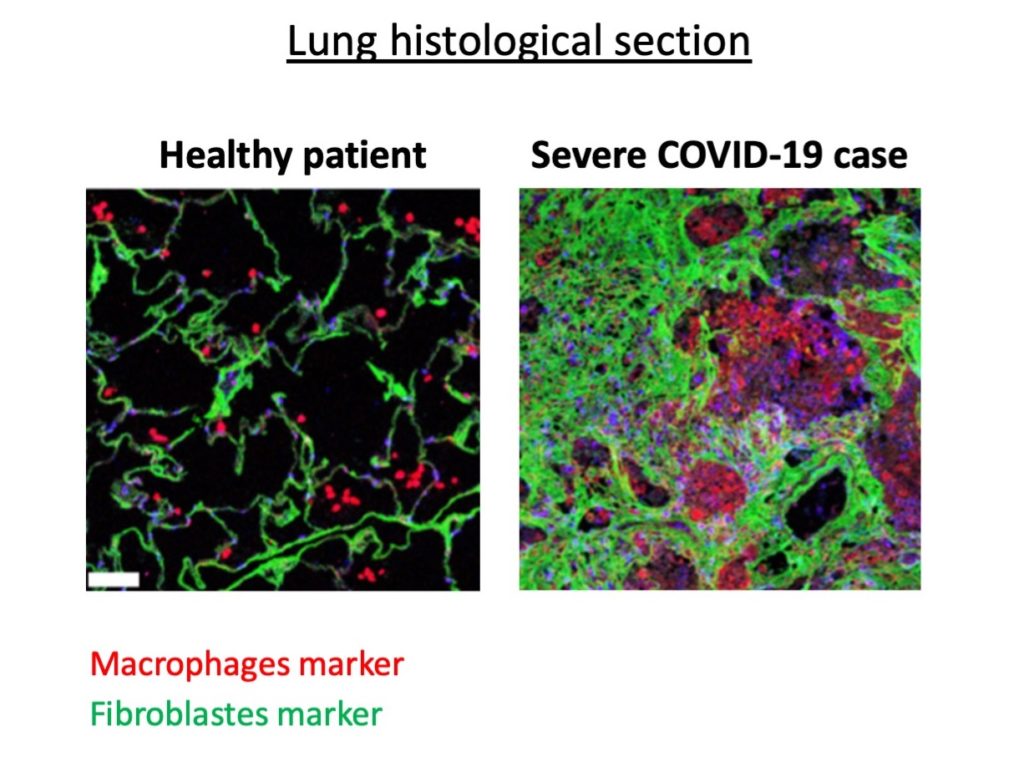 So in serious cases of COVID-19, the immune cells invade the pulmonary tissues, many cells die, and alveolar spaces reduce. This type of pulmonary physiopathology is similar to that engendered by other respiratory pathogens. These results enable better understanding of the progression of the lung disease: one potentially interesting therapeutic direction might be to inhibit the immune system before it over-reacts and causes fatal lung disease.