Cellular ageing is a multifactorial process of molecular changes leading to the progressive degradation of biological functions. It is a major risk factor for many illnesses (cancer, heart attacks, pneumonia…) that occur in the context of COVID-19. These changes can be detected in the genome, in intracellular signalling, in organelles and in the cellular phenotype. The populations of Western societies are becoming proportionately older than ever before. For example, in the United States, the number of elderly people will be greater than numbers of children in 2034. In the light of this perspective, it has become essential to better understand the biological mechanisms of ageing, which in turn will help us to understand aspects of the COVID-19 crisis.

The lungs play a major role in the general health of individuals, and the progressive change in their functioning due to age (from 35 years old) is directly linked to the risk of illnesses, whether respiratory or not. The lungs make up a unique interface between our internal tissues and the external environment (and its aggressors). The lungs are the organ of the human body with the greatest surface area and are made up of 40 different types of cells organised into strata. Age increases the risk of chronic obstructive inflammation, interstitial fibrosis (the over-75s have a 50 times greater risk than 18-34 years old) and lung cancer. With an ageing population, the rate of incidence of cancers is increasing. Cancer of the lungs causes the most deaths (25%), despite there being 5 drug treatments approved by the FDA (Food and Drug Administration). Respiratory infections are a major cause of death in elderly people, in particular pneumococcus and influenza (30 times more risk of death).

In general the ageing process shows itself by changes in morphology and physiology. Progressive decline can be seen in the  alveolar surface, in elasticity, in self-cleaning (mucociliary clearance) and in defence reflexes (mechanical cleaning)

It appears that each of these cellular activities undergoes specific alterations that have consequences in the case of infection by SARS-CoV-2. More particularly, the respiratory epithelium makes up the first line of defence between the exterior environment and our internal tissues. Ageing brings about a decline in epigenetic regulation (gene expression profile changes), telomere shortening, and changes in the functioning and production of mitochondria (the powerhouses  of our cells).

In this alveolar epithelium, which in the main consists of type 1 pneumocytes (AT1), the AT2 are the progenitor stem cells that enable the repair and regeneration of the respiratory system, and also produce the pulmonary surfactant (a surface-active complex necessary for respiratory function). These cells lose the ability to renew and differentiate themselves, and to metabolize the lipids that make up the surfactant or recognize the self (MHC). The interstitial medium (space between the cells) is essential to the functioning, elasticity and cohesion of the entire pulmonary environment. Its functioning also declines with age since the fibroblasts become senescent (risk of fibrosis) and certain metabolisms (collagen, elastin, laminin, fibronectin) undergo gradual modification, all of which increases rigidity.

The lungs have to be able to cope in the face of the constant stress factors (materials, aerosols, pollutants, radiation, chemical agents, lesions, cigarettes or hypoxia) to which they are exposed. But their resistance mechanisms also change with age. The proteostasis network – the system of mechanisms that regulate the “life” of proteins – becomes less efficient. This is the case with the autophagy process that normally degrades poorly synthesized proteins or internalized external agents. When it fails, proteolytic stress and fibrosis are more likely. This is particularly significant for the AT2 cells that synthesise and secrete many components to produce surfactant.

The degradation of dysfunctional mitochondria (mitophagy), a typical feature of pulmonary fibrosis, is also impaired, due to deregulation of the expression of certain genes (PINK1, Parkin). In addition to other consequences, responses to hypoxia (lack of oxygen) are deregulated in the AT2 cells, which contain more than 50% of pulmonary mitochondria and which maintain energy balance in anaerobic conditions (disturbances in the mTOR, AMPK, and HIF2 channels).

Responses to oxydative stress are also altered. The ROS (Reactive Oxygen Species) are metabolic intermediates of oxygen, developed endogenously (mitochondria) or exogenously (cigarette smoke), which accumulate with age. Their levels must be precisely regulated (this is the role of antioxidants) since their accumulation in cells causes mutations in DNA and the oxidation of neighbouring molecules. These molecules thus lose their functions and need to be degraded, but they accumulate since the process of autophagy is less efficient. Elevated levels of ROS are linked with lung cancers, with fibrosis, and with pulmonary hypertension, problems which are particularly accentuated by cigarette smoke. This cellular stress slows mucociliary clearance and thus makes infections and accumulation of debris more likely. As with other tissues, senescence (the stopping of cellular division) plays an important role in this overall weakening of the lungs, notably at the level of interstitial cell remodelling. 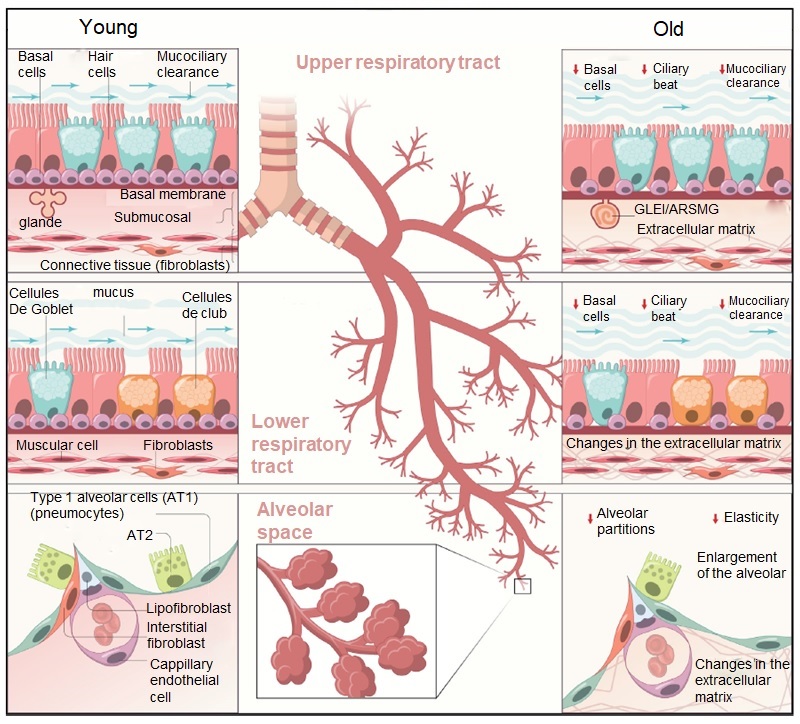 We must look more closely at this description to understand the link between lung ageing and severe COVID-19. The lungs are constantly exposed to pathogens and allergens, and pulmonary immunity also alters with age (immunosenescence). In particular, there are higher levels of inflammation in general for reasons that are little understood. This condition is facilitated by the increased presence of senescent cell debris whose removal is impaired by decreased mucociliary clearance and autophagy. Levels of pro-inflammatory cytokines (IL-1b, IL-6, TNF-a) are higher in elderly people. Paradoxically, this inflammation is accompanied by changes in certain immune system functions: pathogen recognition, phagocytosis, lymphocyte antigen presentation, chemotaxis, and intracellular signalling (LRT pathways, RIG-I). This ultimately leads to less effective induction and stimulation of adaptive responses and therefore increases susceptibility to infection. In addition hematopoiesis is also altered: the production of alveolar macrophages, of naïve B and T lymphocytes and of NK (Natural Killer) cells is reduced, and the immune responses of these cells are deregulated (receptor expression, proliferation, differentiation, signalling, somatic hypermutation and cytokine secretion). In the pulmonary macrophages, mitochondrial functions also undergo changes, interfering with energy metabolism and increasing oxidative stress. Their telomeres are severely shortened.

Excessive infiltration of neutrophiles into the lower respiratory passages can also be observed. Paradoxically, these cells produce less NETs (Neutrophils Extracellular Traps), which prevent viral infections. Some of these observations also apply to other tissues, rendering vaccinations less effective overall in elderly people (almost 2 times less effective in the case of flu vaccination).

The COVID-19 pandemic has tragically shown up the gaps in our understanding of respiratory immunosenescence. After being infected by SARS-CoV-2, patients aged 80 are 20 times more likely to die than those aged 50. In the lungs, the virus infects the AT2 cells that express the ACE2 receptor. The virus is able to exploit the fact that ACE2 expression is stimulated by interferons, themselves stimulated by the presence of the virus. A recent study has shown that the receptor is more expressed in the respiratory passages of elderly people, perhaps in connection with chronic inflammation. The capacity of SARS-CoV-2 to bring about hyper-inflammation, combined with immunosenescence and chronic pulmonary inflammation, is a dangerous combination for elderly people. 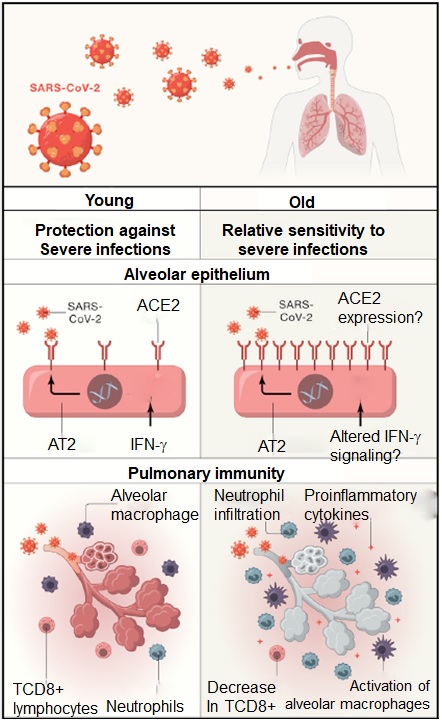 In view of the number of fatal pulmonary illnesses that disproportionately affect this sector of the population, it is urgent that we better understand the mechanisms that lead to decline in this organ’s functions. However, they are still poorly understood because research studies are rare and have been largely carried out on rodents. What is more, research on immunosenescence tends to concentrate on circulating cells and soluble factors without taking into account the immunity issues specific to each organ.

However, intensive research is currently being developed (Human Lung Cell Atlas Consortium) and large-scale data collection is taking place to attempt to deepen our understanding. Since immune mechanisms are multi-factorial, other intensive analysis (multi-immune-omics), taking into account the whole range of these factors, is being set up, in order to determine the “immune age” of individuals, which is different to their “chronological age”. This work may help us predict the risks of mortality, taking all factors into account. Will ageing be treated like any other illness at some point in the future? Certain studies, notably on primates, have already shown that specific practices can slow the ageing process: dietary changes, pharmaceutical compounds or genetic manipulation. Several molecules targeting the senescent cells (“seneolytics”) are currently being developed (Dasatinib, Quercetin). They are capable of reducing illnesses linked to age and in extending life in mice.