Type 2 diabetes and the COVID-19 emergency

The health crisis caused by COVID-19 has serious implications for many chronic illnesses, notably obesity and type 2 diabetes. These conditions involve a higher risk of developing severe illness after SARS-CoV-2 infection. Type 2 diabetes involves the deregulation of glucose levels in the blood (hyperglycemia). High blood sugar levels cause numerous damaging effects over the long term: cardiovascular and renal problems, or damage to the retina for example. Type 2 diabetes affects mainly adults and elderly people, and is linked to obesity. The World Heath Organisation (WHO) estimates that 422 million people already have type 2 diabetes worldwide, while 622 million people are obese. The number of people affected has increased considerably in recent years as populations grow older, and as sedentary lifestyles proliferate. In a recent study, researchers made an inventory of the latest insights into the causes of type 2 diabetes (that we will simply name diabetes in the remainder of this article) and the impact of the pandemic on these patients.

Diabetes and obesity are firstly linked to environmental factors, principally poor diet and a lack of physical activity. However, people with healthier lifestyles may also develop diabetes. Predisposing genetic factors play a role in the triggering of this illness (a risk estimated as moderate to high). The genetic mutations involved are mainly found in the genes involved in the physiopathology of weight and the regulation of glucose metabolism.

Epigenetics also plays a role in the development of diabetes. This involves the biochemical transformation of genes (without their sequences being modified), causing modulations in their expression and activity and thus allowing the organism to quickly adapt to environmental changes. This may directly influence metabolic regulation. Certain key stages in human development have significant influence on the epigenome (the regulation of the expression of genes) over the long term, such as certain times during in utero development, or in puberty, and may predispose the individual to metabolic illnesses.

The biological clock may also cause metabolic disorders. This is an autonomous mechanism which enables anticipation of circadian rhythms so the metabolism can adapt via hormone secretion. Insulin is one of these hormones; it plays a role in the metabolism of glucose and is directly involved in diabetes. It has been shown that a discordance between biological rhythms and life rhythms is a factor in predisposition to diabetes. Other risk factors are currently being studied but have not yet been verified (such as thermic tolerance).

What are the risks of this illness in the context of COVID-19? They operate in two directions. People with diabetes or obesity have an increased risk of developing a severe form of the illness. But SARS-CoV-2 could also be a cause of diabetes. The virus enters cells via the cellular receptor ACE2, which is also present in pancreatic cells. Infection by the virus may cause a loss of the capacity to secrete insulin and the destruction of pancreatic cells, causing patients without antecedents for diabetes to experience severe hyperglycemic episodes. 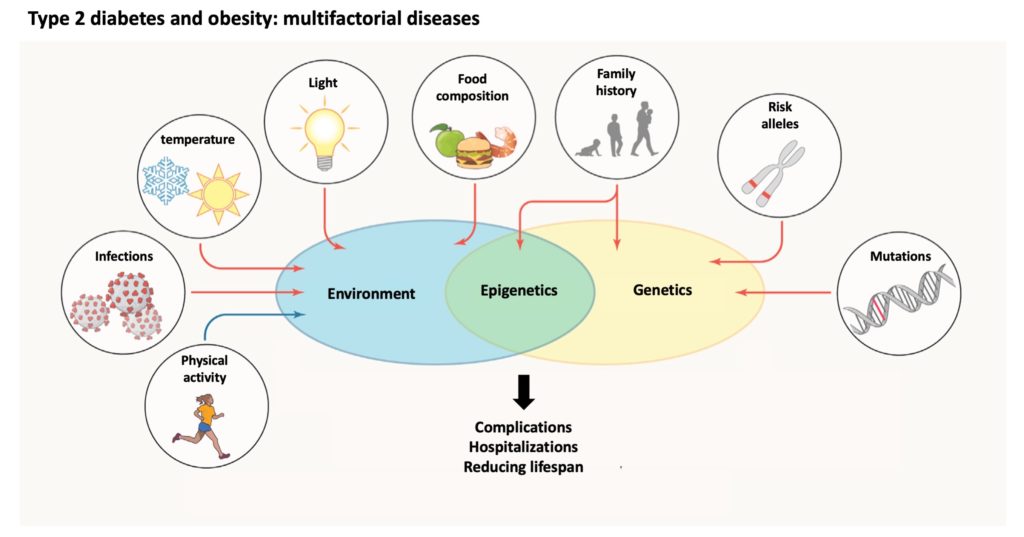 So we can see that diabetes and obesity do not only involve deregulation of glucose metabolism but are also multi-facetted syndromes carrying significant medical and social risks. Preventing obesity remains probably the most effective way of reducing the prevalence of metabolic illnesses. Social actions are necessary, such as promoting physical activity or negotiating with the food industry. The development of personalized medicine may also be a solution. This is defined as being the right treatment at the right moment for the right person. It allows more precise diagnoses, personalized recommendations about life style and more tailored treatments. However only a very few people suffering from obesity or diabetes currently benefit from this kind of personalized medicine.