The emergence of SARS-CoV-2 variants with higher transmissibility and with some capacity to escape neutralising antibodies has called into question the efficacy of currently used vaccines. In addition, the numerous strains of coronavirus already identified in bats suggests a real possibility of future epidemics. The development of vaccines capable of conferring protection against all these strains is therefore vital. They obviously need to provide neutralising antibodies with a broad spectrum of recognition, but also an effective CD8+T cellular response. Several studies show that this immunity is essential against SARS-CoV and SARS-CoV-2, and that it targets numerous viral proteins, unlike the antibody response that principally targets the spike protein. Here again, however, SARS-CoV-2 may escape by protein mutations presented by the HLA Class I complex.

American researchers at the University of Harvard and the MIT (Massachusetts Institute of Technology) have identified viral peptides intolerant to mutations, that is, conserved between the diverse strains of coronavirus. They used SBNA (structure-based network analysis), an algorithm that integrates structural data as well as interactions between protein networks. The principle of this technology, already proven in research on HIV, is that domains allowing a protein to interact with lots of others (“high interaction network”) are less tolerant to mutations. Sequence variations therefore appear in domains in the network with lower capacity. As well as evaluating their relative stability, sequences of identified peptides (fragments of proteins) were compared with those of other strains of sarbecoviruses, including SARS-CoV, MERS-CoV, or current variants.

SBNA is more efficient than conventional analyses, such as sequence conservation or mutational analyses. Amongst the 14 SARS-CoV-2 viral proteins that were analysed, researchers showed that mutating the spike’s high-network residues causes the virus to lose its capacity for in vitro infection. Using computers, 311 peptides from 15 high-network proteins which could be presented by the HLA-I complex were identified (18 alleles tested). The majority (>90%) of these peptides are conserved in the sarbecoviruses and their current variants.

The researchers then evaluated the capacity of these peptides to induce a CD8+T response in 20 healthy donors and 30 recovering COVID-19 patients. Amongst the peptides tested, 56 came from non-structural proteins (NSPs) and 53 from structural and accessory proteins (SPs). Only the SP protein mixture induced a strong CD8+T response in half of the COVID-19 patients. In a supplementary cohort of 23 vaccinated patients (13 Pfizer, 10 Moderna), a mixture of SP peptides specific to the spike induced a CD8+T response in just 9 individuals, with a lesser degree of intensity than in recovering patients. The results were the same for the activation of memory CD8+T cells.

So mRNA vaccines bring about weak CD8+T immunity; this is, however, an essential component of the anti-SARS-CoV-2 immune response. This work highlights a range of highly conserved peptides common to all sarbecovirus strains that are capable of producing a CD8+ T response. In other words, it provides a guide to improving the immune response provided by vaccines to confront current and future variants, but also to help develop a universal anti-sarbecovirus vaccine. 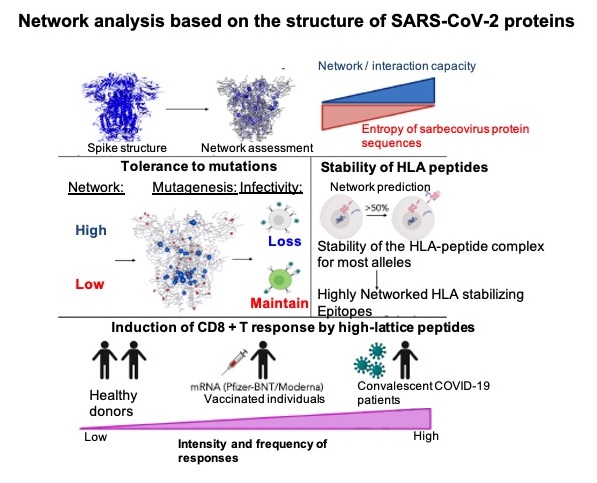