Is the Pfizer-BioNTech vaccine effective in the over-80s?

The massive vaccination of populations is one of our greatest hopes for ending the COVID-19 pandemic. Vaccines based on the original Wuhan strain of the virus enable the production of antibodies directed against SARS-CoV-2. The Pfizer-BioNTech and Moderna mRNA vaccines give excellent protection against COVID-19 when 2 injections are administered. However, little data exists concerning the efficacy of the vaccines in elderly people. In addition, the emergence of new variants, more transmissible and less sensitive to antibodies, reduces the effectiveness of these vaccines. Researchers in the UK (Cambridge Institute of Therapeutic Immunology & Infectious Disease, University of Cambridge and NIHR Bioresource, Cambridge) have analysed the immune response in individuals aged over 80 and young health professionals vaccinated with the Pfizer-BioNTech vaccine.

The researchers examined the serum (containing antibodies) of 140 participants with an average age of 72 having received at least one dose of the vaccine, by carrying out neutralisation tests on the original virus strain. After a 1st dose, they observed that there was a non-linear relation between age and the effectiveness of neutralisation, with a marked decrease in the latter from the age of 80. In addition, at 3 to 12 weeks after the 1st dose, the serum in half the individuals aged over 80 did not have any virus neutralisation activity. However, after the 2nd dose, all the individuals had an active neutralisation response. The scientists also noted that the effectiveness of neutralisation after the second dose was greater when this second dose was given at an interval of 12 rather than 3 weeks. However, although neutralisation is effective against the original strain of the virus, it appears to be reduced against the Alpha (UK), Beta (South African) and Gamma (Brazilian) variants. The weakest neutralisation levels were observed in patients aged over 80.

So after vaccination with Pfizer-BioNTech, age reduces the neutralising response especially from 80 years upwards. Since the elderly population is particularly at risk, it is important to monitor individual responses to vaccination. 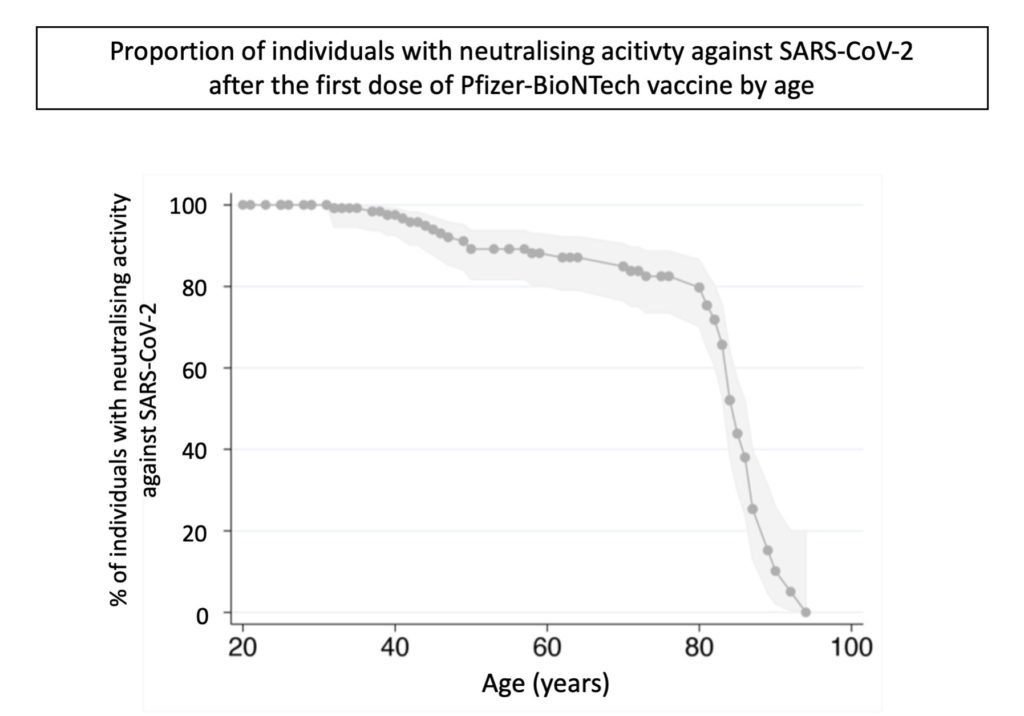