Recent months have seen the emergence of new SARS-CoV-2 variants. These new strains are distinguished by increased transmissibility and pathogenicity in humans. In addition, some of them are able to partially escape the antibody responses brought on by past infection or by vaccination. The Janssen vaccine has been shown to provide effective protection against severe forms of the illness in South Africa, where 95% of strains are South African variants. It consists of an adenovirus vector expressing the spike (S) surface protein of the original Wuhan strain. A study of macaques at the Beth Israel Deaconess Medical Center (Boston, USA) has recently shown that the Janssen vaccine may be effective against the Beta (b) South  African variant.

Researchers immunised 4 groups of 6 macaques: 2 groups with the Janssen vaccine and 2 groups with a placebo. The macaques were then infected either with the original virus strain or with the Beta variant. In the vaccinated animals, it was observed that the production of effective neutralising antibodies against the Beta variant was weaker than production against the Wuhan strain. However, the cellular immune response (CD4 and CD8 T lymphocytes) was similar for the two variants in macaques immunised with the Janssen vaccine.

After vaccination, the animals were infected either with the original strain or by the Beta variant. Vaccination enabled reduction of the viral load in the animals, even though the viral load for the Beta variant was higher than for the original strain. The vaccinated animals developed cellular and humoral immunity against the 2 strains that was higher than in non-vaccinated animals, even though the level of antibodies was lower in animals infected by the Beta variant.

The Janssen vaccine therefore appears to be effective against the Beta variant in this animal model. This data is important so that the usefulness of current vaccines can be validated, despite the emergence of variants, and so that the importance of vaccination can be confirmed. 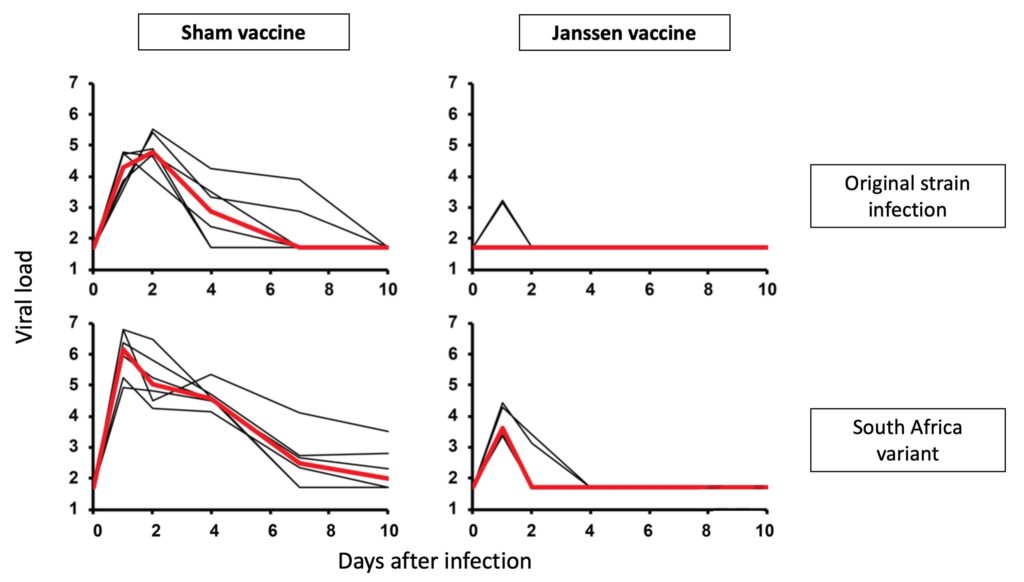