How does SARS-CoV-2 attack the olfactory system?

Anosmia or loss of smell is a common symptom of COVID-19. The mechanism of this phenomenom is poorly understood but some studies suggest that the olfactory nerves may serve as a pathway for SARS-CoV-2 to enter the brain. Studies on the olfactory mucosa and human olfactory bulbs have not advanced very far, since it is very difficult to obtain good quality samples. In the nasal cavity, the olfactory mucosa is made up of an archipelago of cellular islands of various sizes spread over the respiratory mucus. Certain islands contain olfactive neurons. Collecting pure samples from the olfactory or respiratory mucosa is therefore impossible. In addition, taking the olfactory bulbs (we have 2 of them in total) from living subjects may have disastrous consequences due to their lower position in the brain.

German and Belgian researchers (at the Max Planck Institute, Frankfurt and the Hôpital Universitaire de Leuven) have developed a clinical procedure by endoscopy, inspired by cranial surgery, to remove the olfactory bulbs as well as the respiratory and olfactory mucosa (ANOSMIC-19 study). This technique has been used on a cohort of 85 patients including 68 with severe COVID-19 (one to two hours after their deaths), 15 non-infected individuals and 2 convalescents (May 2020 – April 2021). By visualising the RNA of SARS-CoV-2 by fluorescence, it becomes possible to localise the virus’ replication sites and thus better understand how it attacks the olfactory system.

What were the results of this study? The respiratory mucosa is a major site of viral replication, the main target being the hair cells (which displace the mucus layer produced by the goblet cells), confirming that which has already been stated in scientific literature. In the olfactory mucosa, the virus principally targets the sustentacular cells which envelop and support the olfactory neurons, but not the neurons themselves. These cells express ACE2 and TMPRSS, respectively the receptor and a protease, that enable the entry of SARS-CoV-2 into the cell. The landscape of infection sites of this mucosa is extremely heterogeneous. In one infected patient, the researchers confirmed that infection of the sustentacular cells does not modify the expression profile of the olfactory neuron genes: there is therefore no indirect response to the infection. In other patients, the virus may also infect the leptomeningeal layers surrounding the olfactory bulbs, but not the bulb neurons themselves. 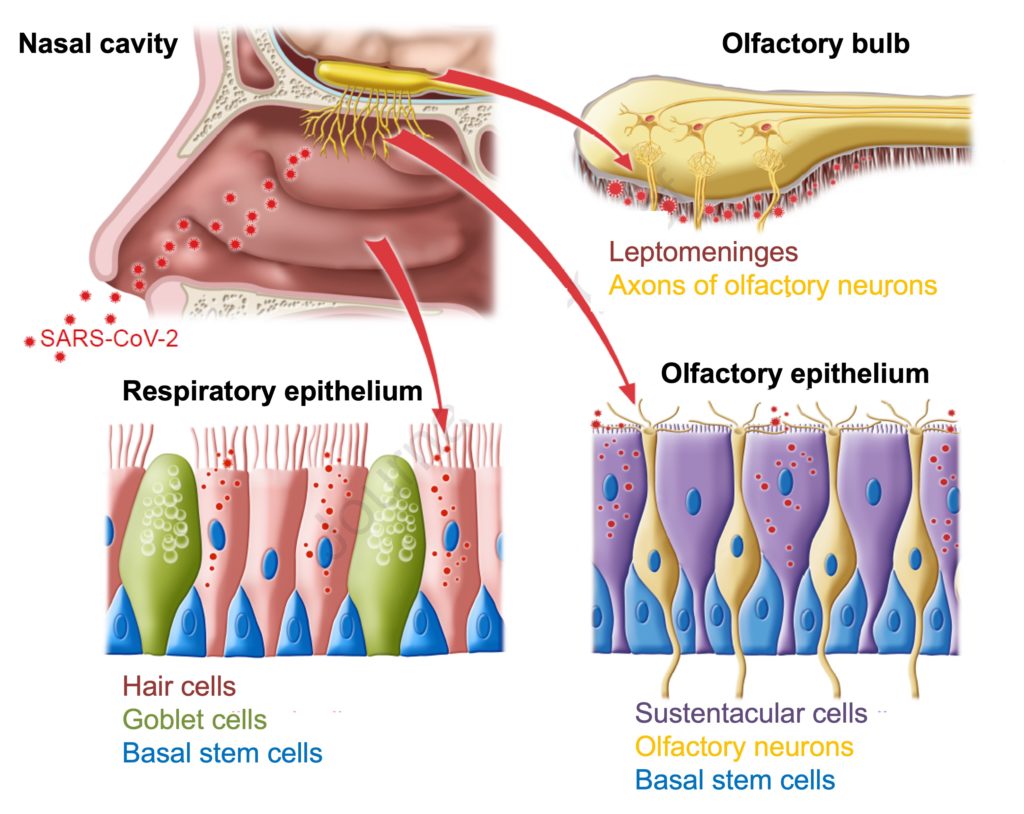