The COVID-19 pandemic has worsened problems of anxiety and depression

Mental illness has been a major public health concern across the world for several decades. Amongst its various forms, those recognised as being the most disabling are depressive and anxiety disorders. These illnesses affect men and women of all ages. Despite numerous campaigns to combat these problems, they have not lessened since the 1990s.

The COVID-19 pandemic has not helped matters. Measures taken during this health crisis to slow the propagation of the virus have not only made those already affected more fragile, but have also led to mental problems surfacing in people who had not shown symptoms until now. Lockdowns, working from home, income loss and school closures are all examples of social restrictions and loss of reference points with damaging psychological effects for fragile people. In this study, Australian researchers analysed the impact of the COVID-19 pandemic on depressive and anxiety disorders in 2020, as well as their consequences.

The researchers systematically reviewed scientific articles published between the 1st of January 2020 and the 31st of January 2021 that referred to depressive and anxiety disorders. They examined more than 1 600 articles and selected 46 dealing with depressive disorders and 27 dealing with anxiety disorders. In addition, they selected 11 studies showing the situation before the pandemic.

The first observation that the scientists made was that human mobility and rates of SARS-CoV-2 infection were significantly associated with numbers of depressive and anxiety disorders at any given moment: increases in levels of COVID-19 infection and restrictions on human mobility were linked to an increase in numbers of cases of mental problems. Before the COVID-19 pandemic, the prevalence of major episodes of depression was 2 470 cases for every 100 000 inhabitants, that is, around 193 million people around the world. During the pandemic, this figure reached 3 153 cases for every 100 000 inhabitants, a total of 246 million individuals.

The scientists estimated that more than 53 million cases of severe depression in 2020 were due to the effects of the health crisis, representing a rise of more than 27%. Concerning problems of anxiety, the estimation was of 3 825 cases per 100 000 inhabitants before the pandemic, that is, 298  million people in total. During the COVID-19 pandemic, prevalence rose to 4 802 cases per 100 000 inhabitants, a total of 374 million individuals. This represents more than 76 million cases due to the effects of the sanitary crisis, an increase of more than 25%. For the two types of disorder studied during the crisis, women were more affected than men, and young people more than older people: women were more affected by the pandemic’s consequences (lower salaries, employment insecurity, increased domestic violence due to lockdowns) and young people were more affected by ramifications such as the closure of schools and universities, social restrictions, etc, than older people.

The countries that were the most affected by the pandemic were those where the largest increases in depressive and anxiety disorders were observed. These mental issues increase the risk of other illnesses and of suicides. These consequences may well be studied in the future. For the moment, the COVID-19 pandemic continues and the global impact on mental health is still not yet known. 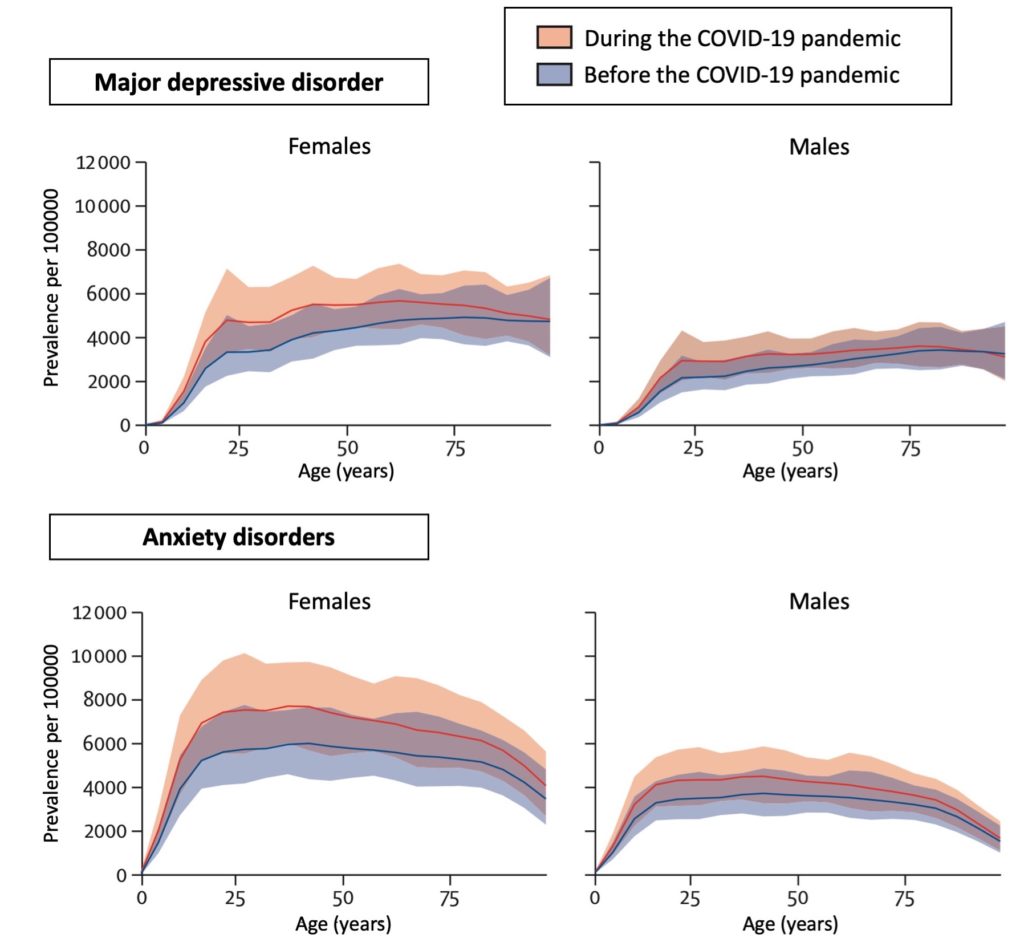 COVID-19 Mental Disorders Collaborators. Global prevalence and burden of depressive and anxiety disorders in 204 countries and territories in 2020 due to the COVID-19 pandemic. The Lancet, October 8, 2021.