Paquinimod is a specific inhibitor of S1001A8/A9 alarmins and significantly reduces numbers of the neutrophil sub-population (abnormal polynuclear neutrophils). This molecule seems to have the therapeutic potential to suppress an uncontrolled immune response associated with the pathology observed in severe forms of COVID-19. How does Paquinimod work?

It must be remembered that innate immunity is one of the first lines of defence against pathogens in the immune system of mammals. The majority of cells are equipped with the protective machinery of innate immunity and are capable of recognizing invading viruses through the PRR (Pattern Recognition Receptor). This receptor triggers signaling pathways leading to cytokine expression and activates immunising genes to instigate pathogen elimination.

When infection by SARS-CoV-2 occurs, the immune response is too great, causing immunopathology. The neutrophils are leucocytes circulating in the blood towards infected tissues in response to an inflammatory stimulus, protecting cells by phagocytosis from bacteria and fungi. Their role in antiviral defence has not been clearly characterised before now. However, their numbers have been significantly higher in patients with serious forms of COVID-19. In these patients, a new sub-population of neutrophils appears: they do not carry markers like CXCR2 and FCGR3B. The precise function of these neutrophils is not known.

The exact action of Paquinimod remains to be determined. In reality, it acts directly on the alarmins: these include notably interleukins (IL), heat shock proteins (HSP) and S100 proteins (including, amongst others the S100A8 and S100A9 proteins). These are immune-activating proteins that are released by cells in response to cell infection or suffering. They transmit intercellular defence signals by attaching themselves to the PRR to activate the immune cells. The response of the alarmins involves the activation of the leucocytes, the production of inflammatory mediators (cytokines for example), and the recruitment of neutrophils and monocytes with the aim of eliminating the foreign microorganisms responsible for cellular damage. Uncontrolled production of these alarmins is dangerous and can even be fatal for the organism in certain cases. Under physiological conditions, high levels of S100A8/A9 alarmins are stored in the neutrophils. After having been infected with bacteria, the neutrophils excrete large amounts of these alarmins.

Researchers have studied the early innate immune response in animal models of macaques and mice when infected with SARS-CoV-2. The transcriptome (level of gene expression) of the lungs and blood was first analyzed on the first day, the third day and the fifth day after infection. It was shown that infection by SARS-CoV-2 causes a non-specific antiviral response or an antibacterial response, accompanied by an increase in neutrophil levels in the lungs at an early stage of infection. The antibacterial response and the neutrophils could be triggered by the alarmin S100A8. These responses are not due to a bacterial coinfection. The significant expression of S100A8 and the neutrophils is seen during SARS-CoV-2 infection, but not during infection by other viruses. The infiltration of a subpopulation of abnormal neutrophils into the lungs then occurred. 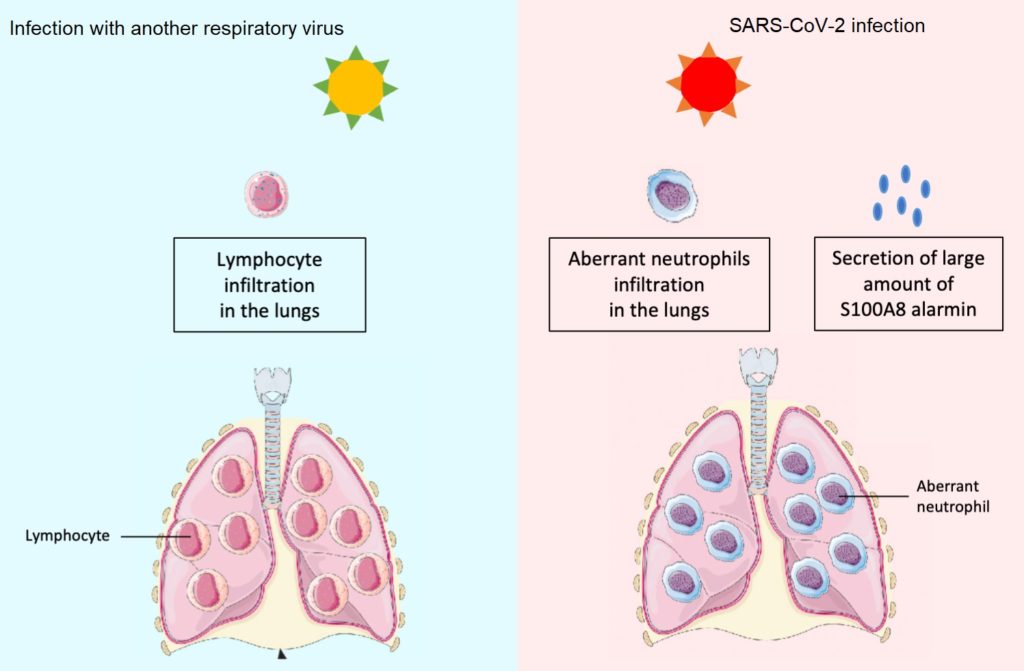 Paquinimod  is therefore a promising drug. However, results need to be confirmed in complementary studies. In fact, in the macaque and mice infection models, the abnormal neutrophils were observed only indirectly, via analysis of the transcriptome.