Baricitinib: a drug that is twice as effective?

Severe cases of COVID-19 are linked to hyper-inflammation in association with a “cytokine storm”, bringing about lung function failure and acute respiratory syndrome. However other organs such as the liver (in 60% of severe cases), the vascular system, the brain or the kidneys can also be affected for reasons that we don’t yet fully understand.

Cytokines are tiny proteins secreted after infection that remotely regulate the activity of immune cells. Some may act as markers to predict COVID-19 mortality.

It is thought that Baricitinib, an immunosuppressant usually used in cases of rheumatoid arthritis, may be useful in the treatment of severe forms of COVID-19. This drug may in theory have a double action: on the one hand, blocking the entry of the virus, and on the other, an anti-inflammatory action.

In order to verify this theory, a joint research team (Swiss, Spanish, Italian and English) evaluated the effects of Baricitinib on 601 patients from two Spanish and Italian cohorts. They were given daily doses of 2 to 4mg over 3 to 14 days, and the effects were compared to those resulting from “standard” treatment (hydroxychloroquine + ritonavir, antibiotics, corticosteroids and heparin).

In the “standard” group, 34,9% of patients needed respiratory assistance or died, against 16,9% in the group that had received Baricitinib. The therapeutic benefits were therefore apparent from an early stage. Certain secondary effects were observed, most often, transaminite-type liver damage, sometimes with bacterial infections due to immunosuppression. However, the causal link was not clearly established. The study’s authors then validated their findings on an additional cohort of 48 Italian patients with moderate COVID-19 illness, all of whom recovered.

They also expanded on these results by in vitro tests on hepatic cells (3D organoid liver cells). In those that were infected, the IFN-a2 and IFN-b interferons (cytokines secreted during COVID-19) stimulated ACE2 (the virus receptor) expression, which also stimulated viral replication. However, this phenomenon is inhibited by Baricitinib in doses comparable to those used in clinics. On the other hand, this effect was not observed in models of lung cells or endothelial (found inside blood vessels) cells. Using genetic approaches (RNA-Seq), researchers showed that Bariticinib reduces the expression of genes precisely expressed by IFNs, by inhibiting JAK/STAT signalling. This drug therefore has an effect antagonistic to IFNs.

Finally, the authors observed that Bariticinib blocks the entry of the virus into the cell, by inhibiting the proteins that govern endocytosis (Numb Associated Kinases, NAKs). In the liver therefore, the antiviral effect is based on the reduction of ACE2 on the surface of the cells, but also on the mechanisms that follow and lead to the virus entering the cell.

Through its various approaches, this work confirms that Baricitinib improves the health of patients by a double action: antiviral, in blocking the replication of SARS-CoV-2, but also anti-inflammatory by reversing the effect of the IFNs. It therefore has a therapeutic advantage over dexamethasone, which is an effective anti-inflammatory in severe cases, but does not alter the replication cycle of the virus. 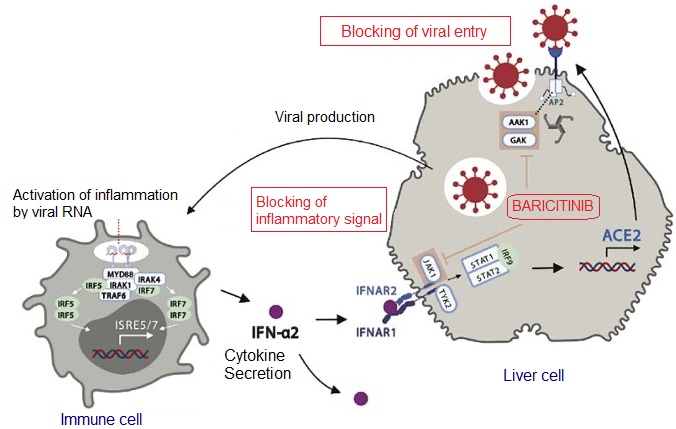 The authors underline that this study has some biases: it is not a randomised test against the effects of a placebo; the influence of comorbidities is not taken into account and the cohorts are of limited sizes. Other clinical trials are currently taking place to evaluate the effect of JAK/STAT inhibitors in the fight against COVID-19, including Baricitinib (ACTT-II and TACTIC-R) and Ruxolitinib. These trials should confirm the results obtained and elaborate certain points such as the presence of side-effects, the age factor, and the size of the administered dose, and should help to better identify Baricitinib’s molecular targets.