Fighting the virus with the help of its receptor

One of the difficulties in the fight against SARS-CoV-2 is that virus mutations may enable it to avoid the action of antibodies produced after vaccination or administered via passive therapies. Mutations of the spike (S) protein may enable the virus to avoid the effects of anti-S neutralizing antibodies that usually block infection. Specifically, the spike’s  Receptor Binding Domain (RBD) governs the interaction with the cell’s ACE2 receptor (Angiotensin-Converting Enzyme 2) to enable virus entry. In its natural state, the spike is in the form of a trimer (3 separate S proteins assembled together) and has therefore 3 RBD domains.

An interesting strategy would be to use soluble ACE2 receptors as decoys to which the virus would attach itself rather than to the receptor located on the target cell, thereby blocking the infection. Since RBD-ACE2 interaction is essential to infection, the virus would not be able to escape the soluble receptor by mutation. Researchers in Seattle modelled this decoy system using computers, basing it on available structural data on the SARS-CoV-1 and -2 viruses, so as to mimic the three ACE2 domains that attach to the RBD. Since ACE2 is an enzyme involved in the regulation of arterial pressure, the model used inactive decoys that would not endanger the organism. This “pipeline” engendered 35 000 molecules, and the most promising 196 were tested experimentally to measure their capacities for binding themselves to the RBD of SARS-CoV-2. In order to avoid spike mutations that would stop it binding to the decoy, the decoy-spike interaction must be as close as possible to the natural ACE2-spike interaction.

Amongst the most promising molecules selected the CTC-445.2 monomer was optimized and showed the most interesting properties. The team then enhanced interaction by producing dimeric and trimeric forms of the molecule, the CTC-445.2d and CTC-445.2t. The dimer interacts10 times more strongly than the monomer with the RBD of SARS-CoV-1 and -2 and is capable of competing with the real ACE2 receptor. Of the 21000 human proteins tested, there was no binding with the decoys, meaning that they are extremely specific, thus reducing the risk of any subsequent side-effects. Structural analysis (electronic cryomicroscopy and computer modelling) shows that the CTC-445.2 binds well to the 3 RBDs of the S trimer, mirroring the natural binding mechanism.

The binding of CTC-445.2 with RBDs can be represented as follows: 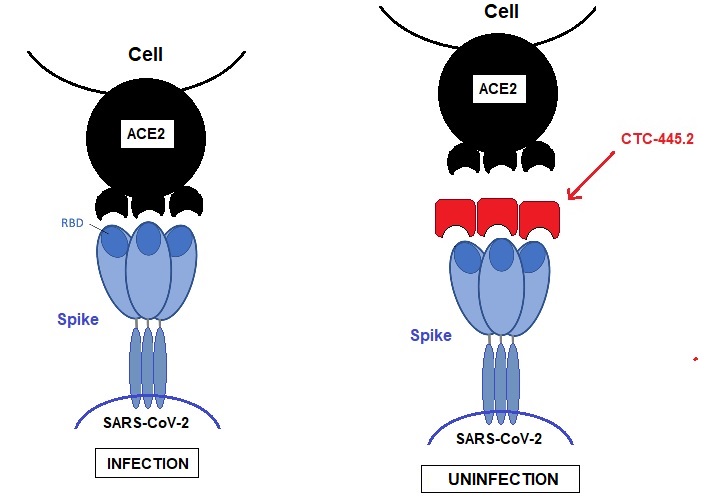 In order to mimic the mutations that render the spike less identifiable and make escape more likely, researchers introduced 1700 mutations into the spike’s RBD and showed that interaction with the decoy receptor remains strong: compared to the natural receptor, it has the advantage of being small and stable. Escape is only possible if several mutations appear together on the S protein’s RBD, which is uncommon.

Following this structural analysis, the team then went on to functional testing. In vitro,  the CTC-445.2 and CTC-445.2d effectively neutralize SARS-CoV-2 infection, with no cellular toxicity or any influence on the natural ACE2 receptor. In vivo, the CTC-445.2d is stable for more than 24 hours in the lungs and respiratory passages of mice having intranasally received a single 100mg dose; After 14 days of such daily administration, no side-effects had been observed. And, a single dose of 560mg administered 12 hours before infection by SARS-CoV-2 protects hamsters from respiratory distress and death.

From a therapeutic point of view, biological proteins from natural sources (blood, etc.) can have a number of disadvantages; undesirable side-effects due to residual activities, auto-immune reactions, limited quantities, stability issues making manufacture, stockage and delivery difficult, etc.. Synthetic proteins (de novo) on the other hand can be enhanced according to specific needs. The decoys described above are “hyper-stable”, inert for the organism and able to prevent escape through mutations. In order to supply more optimized molecules, researchers aim to increase production speed. It is not known if clinical testing is planned.