Has the number of COVID-19 cases in France been under-estimated?

The purpose of virus detection is to identify and isolate COVID-19 patients so as to limit transmission and control the outbreak. But positive cases have been largely under-estimated since many of them are asymptomatic or cause only slight symptoms, and so are not counted. At the beginning of the epidemic, because nothing like this had ever been encountered,  France’s logistical capabilities for testing were insufficient and concentrated only on serious cases. But in order to bring the first lockdown to an end (on the 11th of May 2020), it was decided that all potential cases should be systematically tested.

In order to evaluate the efficiency of this policy and to ascertain its limitations, French researchers at INSERM, Sorbonne-Université used computers to model the evolution of detection rates in 12 French regions between the 11th of May and the 28th of June, the 7 weeks after the end of the first lockdown. The model was based on virological data (PCR) and centred on the SI-DEP (a secure platform where COVID-19 test lab results are systematically recorded), on polls (7500 people responded on COVIDnet.fr) and on demographic and behavioural studies. It took a number of factors into account: the various degrees of severity, lockdown, reduction in numbers of contacts after hospitalisation or self-isolation, relaxation of social distancing measures over time, the partial resumption of normal activity, and increased risks for the elderly. The model’s projections were also compared to independent serological (detection of antibodies) and virological surveys.

We now believe that the real number of cases greatly exceeded cases confirmed at the time. An average of 9 symptomatic cases out of every 10 may not have been identified. Over this period, the expected average detection rate evolved from 7 to 38% as a result of a reduction in infections (end of the first wave) and a progressive improvement in systems of detection (prescriptions were no longer required, PCR “drive” tests developed mobile applications were implemented and delays between symptom onset and test were reduced). 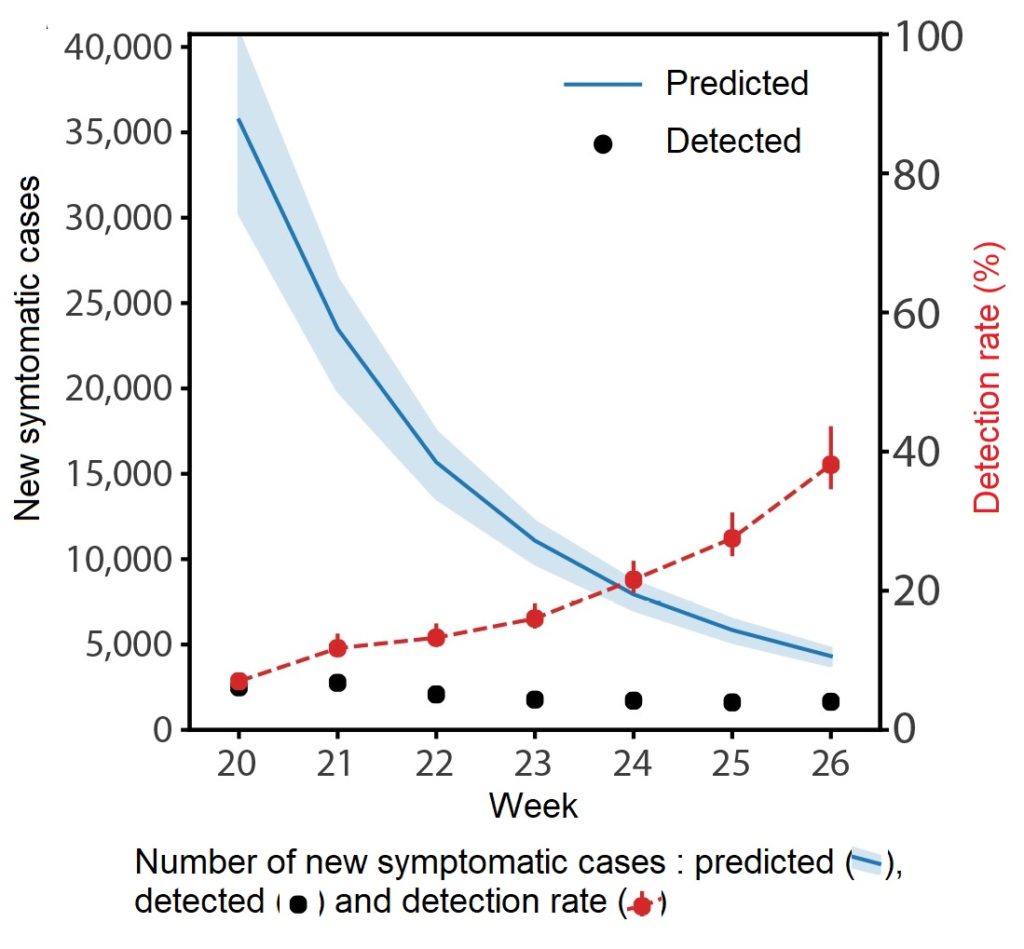 However, there were significant regional disparities. It is believed that at the end of June, 1 symptomatic case out of 3 was registered in the Ile-de-France region and1 out of 5 in the Grand Est region, while almost all cases were registered in the regions of Occitanie and Normandy (undoubtedly because of the low number of cases). The model estimates that on a national level, only 31% of patients with symptoms would have been to see a doctor.

Despite this, the real positive rate over the entire population remained relatively low and stable (1.2%, while the WHO aims at less than 5%). Although mathematical projections have limitations, RT-PCR tests are imperfect, and a high number of insignificant tests overload the system, this model makes it clear that testing capacities were quickly found wanting as the outbreak progressed. During the period under study, the authorities planned to carry out 700 000 tests per week, but only managed 250 000.

This is why we must urgently increase testing capacity if we are to be able to effectively control the epidemic by identifying at least 50% of symptomatic cases. Surveillance needs to be improved to carry out more targeted tests, and those who have been in contact with infected people need to be informed more efficiently. It is essential that patients go to see a doctor and get tested soon after symptoms appear, in particular those with moderately severe symptoms. The authors of this study suggested more aggressive public awareness campaigns should be implemented (editor’s note: this was proposed at the time of the study).