The sensitivity of tests is secondary to the speed of results

Individuals infected by SARS-CoV-2 can transmit the virus whether they are pre-symptomatic (the period prior to the beginning of symptoms), symptomatic or asymptomatic. After becoming infected, an individual undergoes a period of incubation during which time the viral charge is too small to be detected. This is followed by a phase of exponential multiplication of viral particles, leading to a peak in the viral charge, then a decline towards total elimination of the virus by the body (known as viral clearance). It should be noted that the efficiency of viral transmission is directly linked to the viral charge. In addition, pre-symptomatic people are most infectious just before the onset of their symptoms. 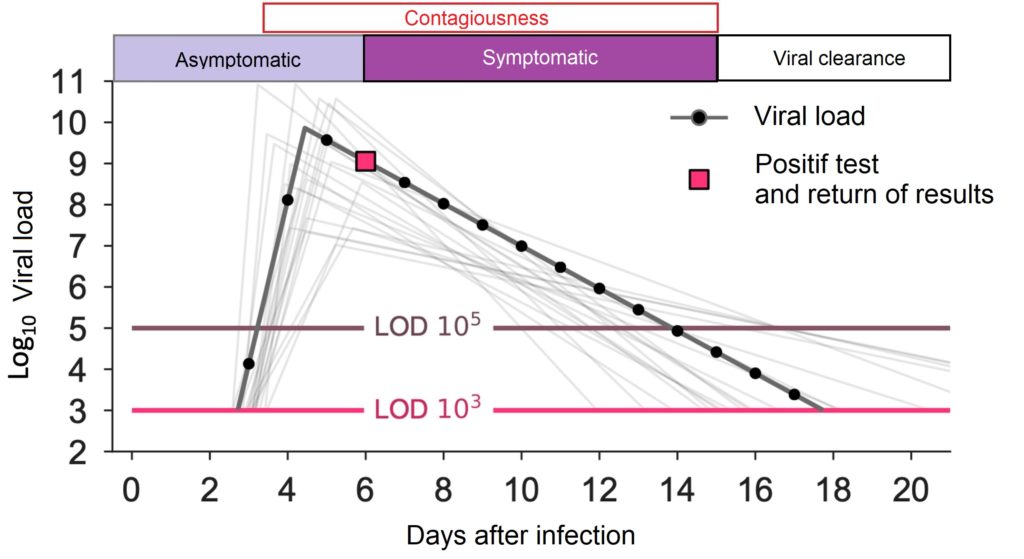 Since highly contagious people have no symptoms for the most part, or have not yet shown symptoms, the re-opening of society and control of the epidemic would be made easier by massive testing of the population. Diagnostic tests and the isolation of positive cases could be enough to break the chain of transmission and make control of the virus’ spread possible.

Confidence in testing depends principally on their virus detection sensitivity. The RT-qPCR test is the benchmark for diagnosis, with a detection limit of 103  copies of viral RNA per millilitre (cp/mL). However, RT-qPCR is expensive and results take 24 – 48 hours to come through. Certain tests are quicker and can reduce costs as well as having a waiting time of just a few minutes. This is the case for example with saliva or antigen tests. But these tests have a 100 times lower detection limit (105 cp/mL).

Researchers have investigated the impact of regular testing on the transmissibility of the virus between individuals, by modelling the viral charge of 10 000 people simulated on a database. The percentage of contagious individuals that could be isolated through screening tests was calculated by comparing diagnostic sensitivity tests of 103 and 105 cp/mL and different screening frequencies.

The analysis shows that there is a slight difference in levels of reduction of virus transmission between the 2 types of tests (RT-qPCR and the quicker tests). In addition, the more individuals get tested regularly, the greater is the reduction in rates of virus transmission between individuals. Likewise, it was shown that someone who gets tested infrequently is at greater risk of testing positive. Finally, for viruses with SARS-CoV-2-like infection kinetics, modelling shows that a rapid test is better than a more sensitive but slower test. 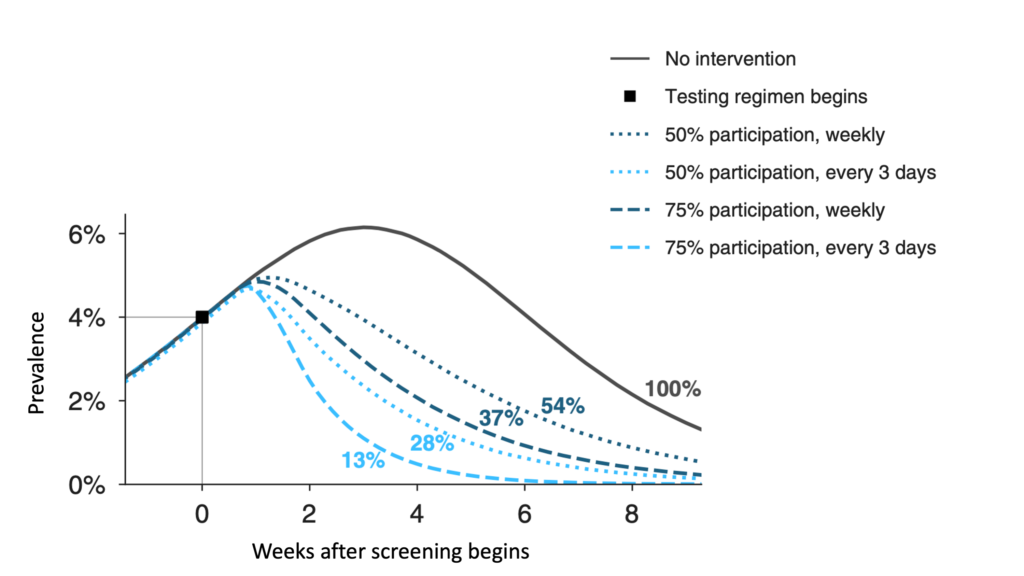 Overall this study shows that large-scale public testing can help to limit the spread of the virus. In addition, these tests allow infected individuals to be isolated at the start of infection, but also enable people in the process of getting better to come out of isolation when their viral charge is too low for the virus to be passed on.

But these analyses have their limits. Firstly, the sensitivity of a test is not limited to the detection of viral load. Poorly carried out sampling may, for example, modify the test’s sensitivity, although certain methods of sampling such as saliva tests are less affected by this problem. In addition, the modelling of participation in testing is statistically independent of the individuals’ backgrounds, whereas we know that behavior differs from one segment of the population to another, in terms of self-protection or propensity to be screened. Likewise, some groups of people refuse to self-isolate after a positive result, thereby adding to the difficulty of controlling the epidemic.

Daniel B. Larremore and coll. Test sensitivity is secondary to frequency and turnaround time for COVID-19 screening. Science Advances  01 Jan 2021: Vol. 7, no. 1.