Evaluation of the immune memory when faced with SARS-CoV-2

Several agents are involved in the immune response specific to the fight against the SARS-CoV-2: the antibodies, the B lymphocytes (LB), the T lymphocytes T (LT) CD8+ (or cytotoxic cells, which destroy infected cells), and the LT CD4+ (auxiliary cells, which allow the activation of other immune cells). This immune response is already quite well known. 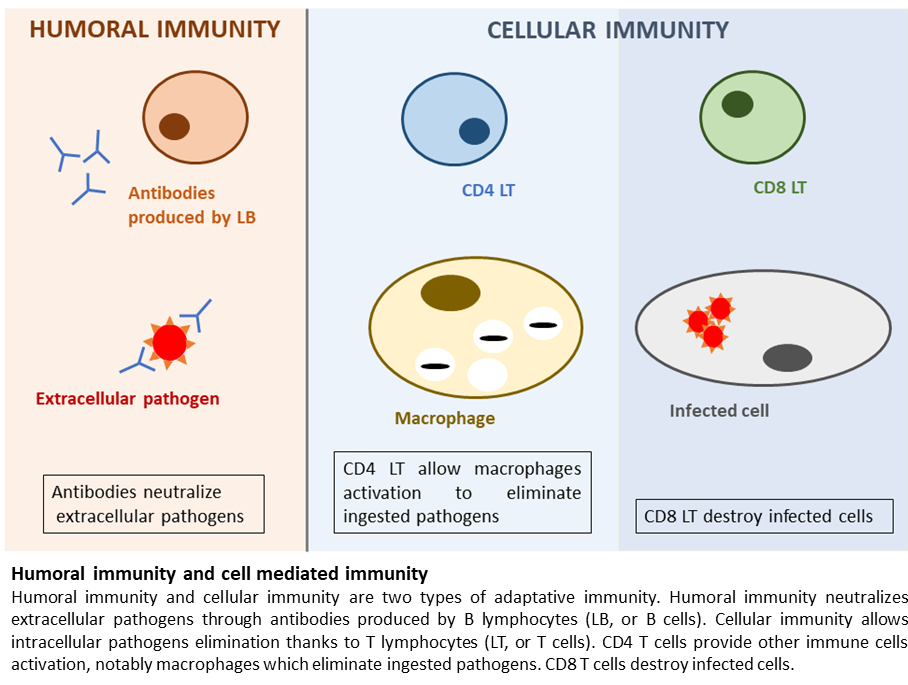 How does immune-memory help in the process? Recent studies have shown that the presence of neutralizing antibodies targeting SARS-CoV-2 is not linked to less severe forms of the disease. On the other hand, they are associated with protective immunity against reinfection by the virus. We also know that the specific T cell response is important in controlling primary infection in someone infected by the virus. However immune-memory, which helps protect the individual against reinfection, is less well known.

Immune-memory, obtained following a first infection or immunization (by vaccination for example) is closely studied in vaccine development. This immune-memory allows a more rapid and stronger immune response to a second exposure to the pathogen than the response to the initial exposure, as shown in the figure below. 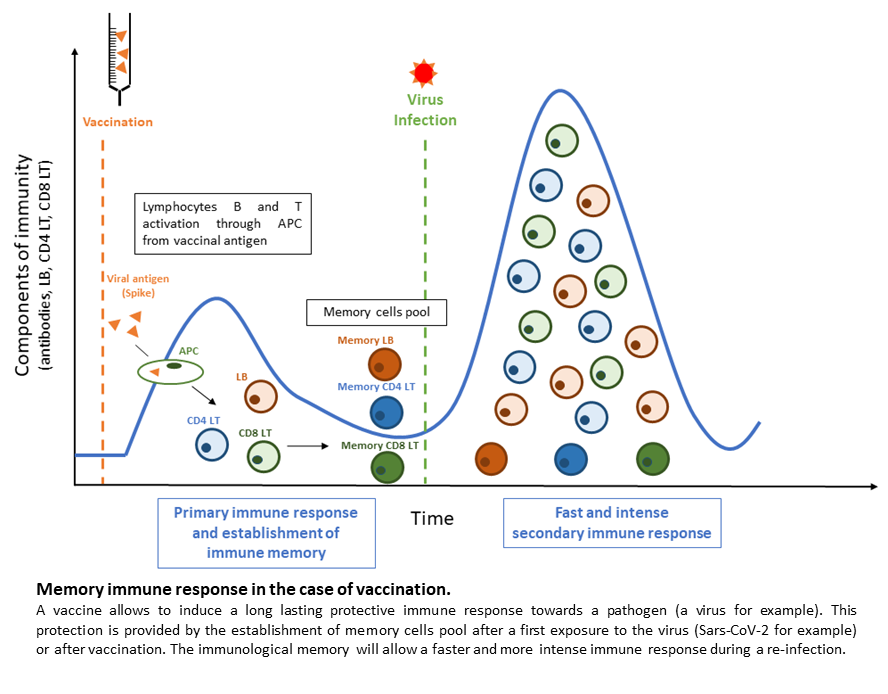 SARS-CoV-2 is a new virus and unfortunately research into immune-memory cannot be based uniquely on predictions as to the immune response observed a short time after recovery. It’s necessary to evaluate responses of the immune-memory several months after infection so as to verify the organism’s reactivity. This requires the study of different components including the antibodies, the LB, the LT CD4+ and the CD8+ cells, which may have immune-memory reactions at different kinetic rates, in other words, may have variable reaction speeds.

To study this, 185 individuals infected by the virus were observed. They were aged between 19 and 81 and had widely varied levels of the illness (asymptomatic or with mild, moderate or severe symptoms). Blood samples were taken up to 8 months after infection so as to study the antibodies and the immune-memory cells in circulation.

Concerning the antibody response, it was observed that 90% of patients studied possessed neutralizing antibodies at 6 to 8 months after infection. The IgG antibodies targeting the virus’ spike protein (a surface protein) remained active for some time, with a slight reduction after 6 months. The antibodies targeting the  receptor-binding domain (RBD, domain situated on the spike protein) and the nucleocapsid protein largely follow the same kinetic pattern as those targeted against the spike protein. Nevertheless, the amplitude of the antibody response is extremely variable depending on the individual, and this is a central characteristic of immune-memory when faced with this virus. 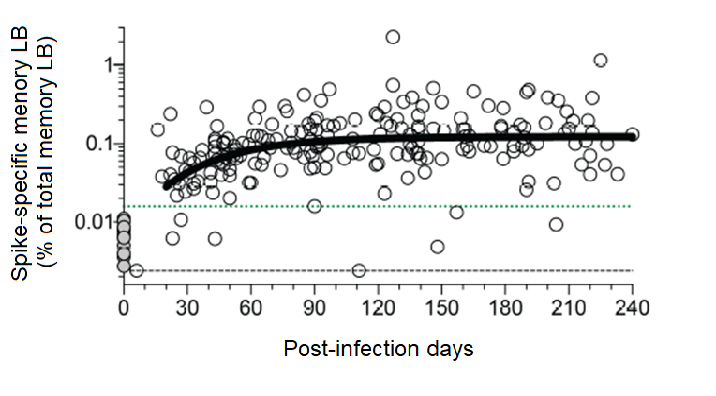 As regards the LT CD8+ memory response directed against Sars-CoV-2, 61% of individuals possess these cells one month after infection. This proportion of individuals decreases to 50% after 6 months.

What are the principal conclusions of this study? It has shown that an immune-memory comprised of at least 3 components (antibodies, LB, LT CD4+ or LT CD8+) is present in 90% of patients studied. This indicates that durable immunity against Sars-CoV-2 reinfection is likely to be present in a majority of individuals.