Defective immunity of the nasal mucosa may result in severe cases

Like other respiratory viruses, SARS-CoV-2 multiplies initially in the nasopharynx, which facilitates its transmission. However, certain patients develop an infection in the lower respiratory passages where a combination of inflammatory and viral processes may lead to severe cases of COVID-19. However, the first cellular targets of the virus and the consequences of infection on the epithelium are not well known.

American researchers at Harvard University (Cambridge) and the MIT (Massachussetts Institute of Technology, Boston) have identified and characterised the first cells of the nasal mucosa to be targeted by SARS-CoV-2. They formulated a hypothesis according to which the first stages of infection determine the trajectory of the COVID-19 physiopathology. They established the genetic profiles (transcriptomes) of cells taken from the nasopharynx of 23 healthy patients and 35 COVID-19 patients in the early stages of the disease. They were thus able to create a detailed outline of the epithelial and immune cell diversity of the nasopharynx.

In the first stages of infection, severely ill patients have levels of viral RNA comparable to moderately ill patients. But the researchers found that the severely ill undergo a dramatic drop in ciliated cells, the main cells of the nasal epithelium, eliminating mucus (secreted by the goblet cells) and contaminating them by the action of vibrating cilia. Conversely, they observed expansion and increased differentiation in secreting cells (goblet cells), probably to compensate for the loss of the ciliated cells. This leads to large cellular diversity and a remodelling of the epithelium: mature cells are replaced by immature secretory, deuterosomal, and ciliated cells.

The researchers observed in severe cases a concentration of inflammatory myeloid cells (future macrophages and granulocytes), which secrete in particular pro-inflammatory cytokines TNF, IL1β, CXCL8, CCL2/3 and CXCL9/10/11. Unlike moderately ill patients, the severe cases show an absence of interferon response by infected ciliated cells (except for some minority sub-types) as well as those genes induced by this anti-viral response (Interferon Stimulated Genes, ISG). Numerous other genes are deregulated in the epithelium of severely ill patients. For example, genes in the calprotectin (a pro-inflammatory alarmin associated with the innate immune response) are over-expressed, an event that has already been described as preceding a cytokine storm. The infected cells under-express certain genes such as MHC-II (a major histocompatibility complex, important for the recognition of self), but over-express TMPRSS2/4 (transmembrane serine proteases involved in viral entry).

This work suggests that in response to SARS-CoV-2 infection, early failure of antiviral immunity (mainly by interferon and ISGs) in the nasal epithelium underlies progression to a severe form of lower respiratory tract disease. These results confirm several others from systemic analysis, but show that these weaknesses take root in certain cells in the nasal mucus. The authors therefore provide critical data on those factors in the host that allow or restrict viral replication in vivo.

For the first time, it has been established that SARS-CoV-2, and probably other coronaviruses, causes deregulation in the MHC-II genes involved in the presentation of antigens, which may be another way of evading the innate anti-viral response at the start of infection. This information provides the possibility that, through early action targeting the nasopharynx, it may be possible to block the progression to severe illness by targeted therapies. 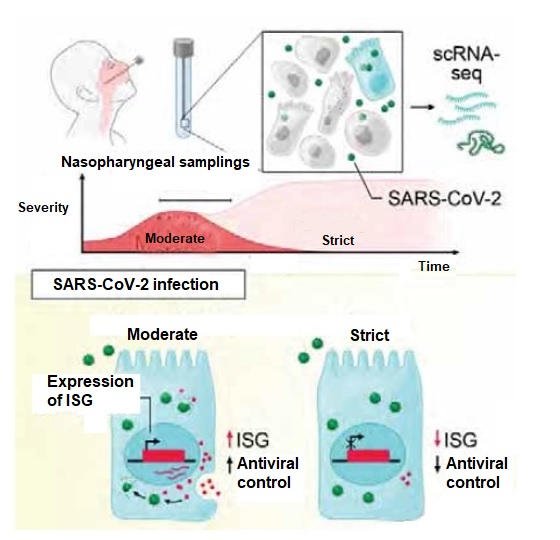