Antibodies that are effective against variants

The SARS-CoV-2 variants of concern (VOC) are more transmissible, potentially more virulent, and capable of escaping neutralising antibodies (nAbs), whether they are therapeutic or induced by natural infection or by vaccination. The spike governs viral entry, and is composed, amongst other elements, of the RBD (receptor binding domain), which interacts with the human ACE2 receptor. Compared to the ancestor strains of SARS-CoV-2, the VOC show mutations in the RBD. Since this is the principal target of the nAbs, which block the spike-ACE2 interaction, these mutations may mitigate their action. There is therefore a need to characterize new antibodies with a broad spectrum of reactivity.

American researchers at the NIH (National Institute of Health) have identified antibodies capable of neutralising several VOC. They analysed blood samples from 22 moderately ill and convalescing COVID-19 patients, previously infected by the Washington ancestor strain (WA-1, with a spike identical to the Wuhan strain). They identified 4 patients producing very potent nAbs, that is, binding strongly to the spike and with a high capacity for neutralising WA-1. Using their B-lymphocytes, they isolated more than 200 anti-spike antibodies.

They then selected the 4 most powerful anti-RBD antibodies (A19-46.1, A23-58.1, B1-182.1 and A19-61.1). Structural investigation showed that these nAbs effectively block spike-ACE2 binding, but that A23-58.1 and B1-182.1 bind with the RBD only in its open position (class I nAbs), whereas the A19-46.1 and A19-61.1 bind in both open and closed positions (class II or class III nAbs). Unlike several therapeutic nAbs, (LY-CoV555, REGN10933, REGN10987, CB6), these experimental nAbs maintain high binding efficiency and strong neutralisation potential against 13 VOC, including the Alpha (⍺) UK variant, the Brazilian Gamma(ɣ) and Zeta (ζ), variants, the  Bêta (β) South African variant, the Epsilon (ε) Californian variant, the Iota (Ɩ) New York variant, and the Indian Kappa (κ) and Delta (δ) variants. The effectiveness of 2 of the most powerful nAbs resides in the fact that they target a vulnerable zone of the RBD (“supersite”, hook-like motif + CDR crater) which interacts very little with zones that are subject to mutations (“hotspots”). Although deriving from different donors, they come from the same IGHV1-58 germ line.

Finally, the researchers evaluated the capacity of the WA-1 strain to resist these experimental nAbs by carrying out in vitro infections. The 4 nAbs generated escape variants carrying several mutations (notably L452R, K444E/T, F486S/L, and N487D). These mutations are little present, or even absent in some cases, in more than a million SARS-CoV-2 genomes referenced using the GISAID data base. This may indicate an absence of selection pressure (few people develop these nAbs) or that these mutations observed in vitro affect viral replication in vivo. The combination of B1-182.1 with A19-46.1 or A19-61.1, which can bind simultaneously to the spike with complementary modes of binding, effectively reduces resistance and the appearance of these escape variants.

This study shows that infection by an ancestor strain of SARS- CoV-2 can produce powerful and effective nAbs against VOC. This cross-reactivity is based on specific sites of the RBD, such as the VH1-58 supersite in this instance, uncoupled from mutation hotspots that underpin VOC resistance. This work opens a path towards the development of vaccines targeting these specific sites, which may enable protection against current VOC. Utilised therapeutically, combining them may reduce the risk of resistance. 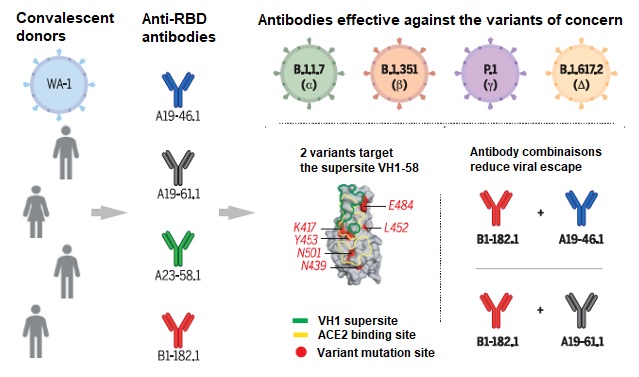