Can some antibodies make the illness worse?

Used as prevention or therapy, neutralising antibodies (NAbs) can help control the COVID-19 pandemic. They mainly target the RBD (Receptor Binding Domain) of the spike viral protein, thus blocking entry of the virus into the target cell. But certain NAbs, less powerful, also target the NTD (N-Terminal Domain). Conversely, certain so-called “facilitating” antibodies are able to stimulate infection by several viruses in vitro (ADE, antibody-directed enhancement). This mechanism is particularly dependent on the Fc effector functions of the NAbs and is mostly observed in macrophages and B cells.

American researchers at Duke University have explored the way ADE works in vivo after infection by SARS-CoV-2. They isolated NAbs specific to the virus in a convalescing COVID-19 patient, but also in another patient having contracted SARS-CoV 17 years before. They firstly characterised these antibodies in vitro : amongst 463 selected, 44 were neutralising and targeted the RBD; 10 others were neutralising and targeted the NTD. 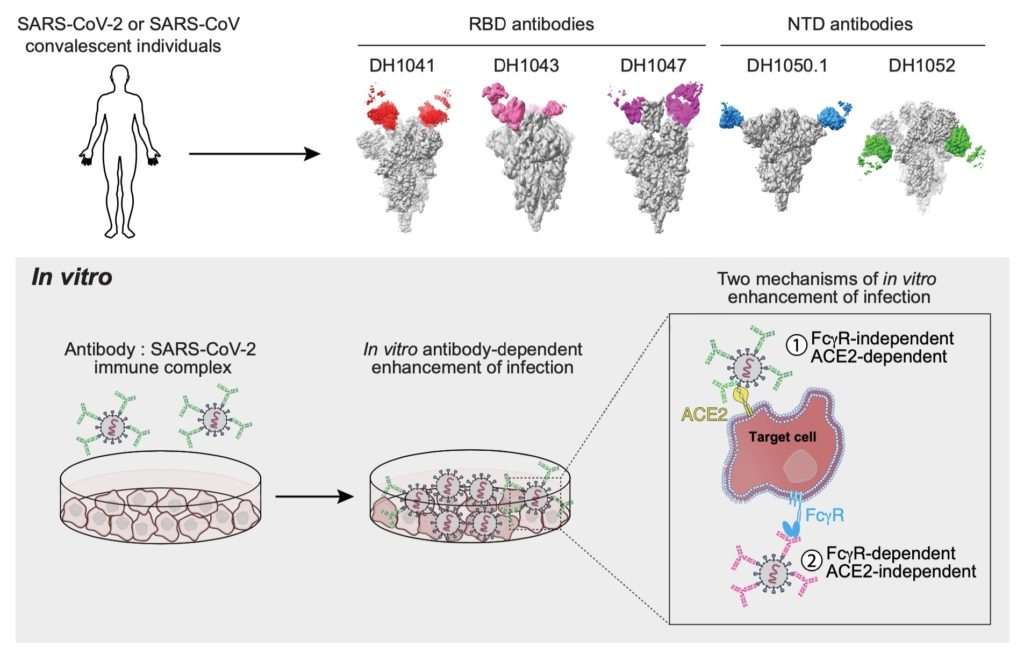 Using structural approaches, the researchers showed that the anti-NTD antibodies that were capable of ADE bind to the spike in a different way to other antibodies. In addition, the anti-RBD and anti-NTD antibodies can also interact simultaneously with the spike, which may modulate neutralising functions against ADE.

Despite this, it is difficult for an anti-NTD antibody, capable of ADE (DH1052), to cancel out the neutralisation capacities of an anti-RBD NAb (DH1041) when they are mixed before in vitro SARS-CoV-2 infection. Although levels of these Abs were comparable in the 21 COVID-19 patients, this suggests that after natural infection, the presence of these 2 types of antibodies in the blood does probably not swing the balance towards ADE.

In mice, the administration of the DH1052 antibody, prior to infection with SARS-CoV-2, reduced the severity of the illness as well as viral replication in the lungs. DH1041, given alone or in combination with the DH1050.1 antibody, before or after infection, had the same effects. The DH1046 and DH1047 antibodies (which also recognise SARS-CoV) protected mice infected by the WIV1-CoV strain from bats.

In cynomolgus macaques, administration of the DH1052 antibody, before infection with SARS-CoV-2, did not heighten clinical symptoms such as lung inflammation, irrespective of the dose. However, macaques that  had received a dose of DH1050.1 showed reduced inflammation. These 2 antibodies both reduce viral replication in the upper and lower respiratory tracts. Similar effects were observed with anti-RBDs. Of the 46 macaques having received antibodies capable of ADE, 3 showed increased signs of inflammation, but only one developed a severe form of the illness, without it being established as to whether the antibody was the cause.

This study shows that after infection by SARS-CoV-2, we develop antibodies that may have ADE potential in vitro, but this does not lead to more severe forms of COVID-19 in vivo. This observation is reassuring regarding treatment by passive transfer of serum that contains a mixture of antibodies from convalescing patients. The antibodies’ Fc effector functions may therefore reduce in vivo viral replication by mechanisms (still to be defined) other than neutralisation.

Dapeng Li and coll. In vitro and in vivo functions of SARS-CoV-2 infection-enhancing and neutralizing antibodies. Cell. 2021 Jun 18.