The anti-SARS-CoV-2 immune response is made up of antibodies, which block viral infection, and the cellular response, which works through cytotoxic lymphocytes (CTLs) recognising and destroying infected cells. This latter function requires viral proteins presented on the surface of cells by the HLA-I (Human Leukocyte Antigen) complex to enable their recognition. Several mutations of SARS-CoV-2 have emerged in the course of the pandemic and some, such as the D416G, have become dominant. Recently the Alpha variant (⍺ or UK), Beta variant (β or South African), and Gamma variant (ɣ or Brazilian) have spread rapidly across the world. Although we know that certain variants are relatively resistant to antibody responses, their capacities for escaping the cellular response have not yet been established.

Japanese researchers (at the Universities of Tokyo, Tokai and Kumamoto) have explored the capacity of some variants to escape cellular immunity. Using computer modelling, they first of all determined that the NF9 peptide, situated in position 448-456 of the spike RBM (Receptor Binding Motif) is an immunodominant epitope when it is presented by the HLA-A*24 :02 allele, predominantly present in East and South-East Asia: the immune response targets it in particular. They also confirmed that NF9 effectively activated CTLs in the blood samples of 16 convalescing COVID-19 patients who were carrying this allele, but not in 3 HIV-negative patients, nor in 6 COVID-19 patients who were carrying another allele. NF9 also caused the production of pro-inflammatory cytokines (IFN-ɣ, IFN-⍺ and IL-2) by CTLs.

By analysing 750 243 viral genomes available on GISAID (Global Initiative Sharing All Influenza Data, which also lists SARS-CoV-2 genomes), they observed that L452R and Y453F mutations in NF9 are frequent and present in the B.1.427/429 (Californian) and B.1.1.298 (Danish strain causing reinfection between humans and mink) variants. These mutations affected the affinity of NF9 for the HLA-A24 leukocyte, removed the ability of NF9 to activate CTLs and to induce the production of IFN-ɣ in 8 COVID-19 patients, but increased the capacity for binding to the ACE2 human receptor in vitro. The L452R mutation also helped the virus to grow, increased toxicity in several cell lines, optimized its expression and stability, and enhanced the spike’s ability to fusion.

Using the GISAID as reference, epidemiological analyses show that the L452R mutation appeared earlier in the B.1.39 lineage in Denmark, which never became widespread, whereas in the B.1.427/429 lineage, it initially spread successfully in California, then became dominant across the USA. The fact that the percentage of Asians (frequent carriers of the HLA-A24 allele) in the population of California is higher than in the rest of the country may have contributed to this spread. The Y453F mutation was detected only in Denmark in the B.1.1.298 lineage in humans, mink and cats. Cats infected by humans may also have helped this strain to spread, but its proportion is tending to decrease today.

The L452R and Y453F natural mutations therefore have the ability to escape cellular immune responses in HLA-A24 individuals, but also confer additional advantages on SARS-CoV-2, such as more efficient membrane fusion. Other studies report that these same mutations also allow escape from antibody responses. In addition, the L452R mutation is found in the Delta variant (δ, Indian, B.1.617). These mutations represent a risk of escape from the overall immune response. However, the effects of these mutations on the severity and the transmissibility of the virus and on mortality rates in real conditions remain to be determined. 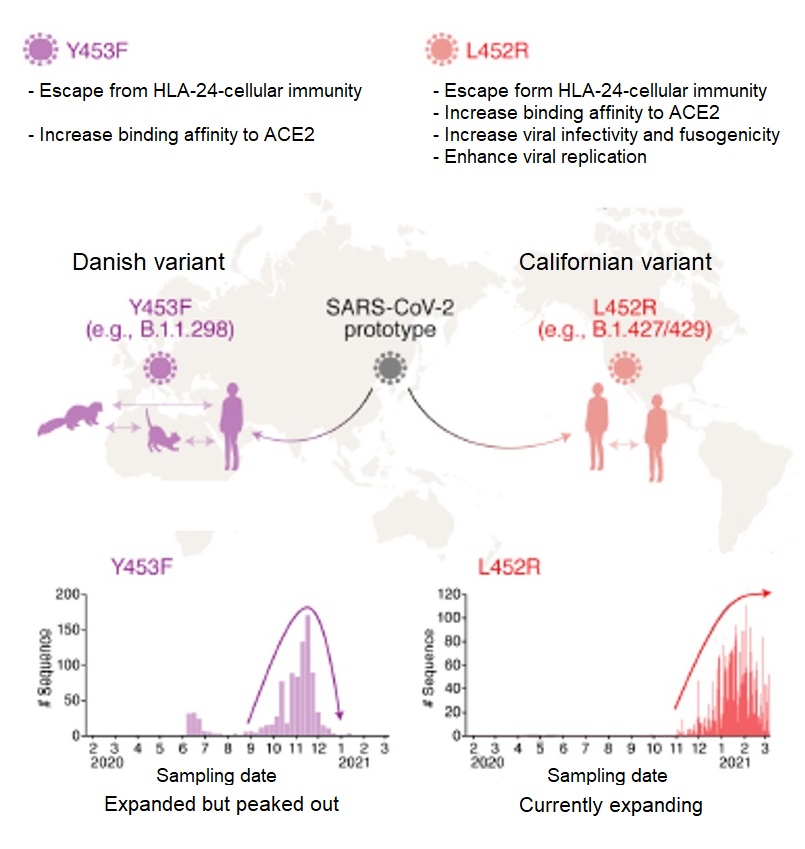