The Brazilian variant evolved in Manaus

Brazil is one of the countries most severely affected by the health crisis caused by COVID-19 and had registered more than 13 million cases and 300 000 deaths by March 2021. Amazonas, with its capital Manaus, is among the most affected states; two thirds of its inhabitants had been infected by October 2020. But this elevated level was not sufficient to prevent a 2nd wave of transmissions and deaths at the end of 2020 and the beginning of 2021. An international study has recently shown that this 2nd wave was at the origin of the emergence of a new variant in Manaus, called the P1 strain.

Its researchers sequenced the virus’ genome in 184 samples taken from patients infected with SARS-CoV-2 between November and December 2020 in Manaus. They discovered a new variant, named P1, containing 17 mutations in its sequence, of which 10 were in the spike (S) surface protein. 3 of these 10 mutations (K417T, E484K and N501Y) are situated in the RBD, the domain of the ACE2 cellular receptor which enables the virus to enter the cell. These 3 mutation sites, also present in the South African variant, may be at the origin of its increase in transmissibility. The E484K mutation may in addition reduce neutralisation of the virus by the antibodies.

The scientists then carried out a phylogenetic analysis known as a “molecular clock” to estimate the date of the variant’s emergence. The results showed that the virus probably appeared between the 6th of October and the 24th November 2020 in Manaus. Then, using mathematical modelling, they were able to estimate that the P1 variant may be between 1,7 and 2,4 times more transmissible than the original strain, and could bring with it a supplementary risk factor of between 21 and 46% that it may be able to escape immunity acquired through infection by the original strain.

The new variant, called the Brazilian or the P1 variant, first appeared in mid-November 2020 and caused a 2nd wave of infection in Manaus, which spread rapidly through the whole of Brazil. It has now been detected in more than 36 countries. This fact demonstrates the need to monitor the appearance of new variants so as to be able to evaluate in particular the real effectiveness of vaccines against these new strains. 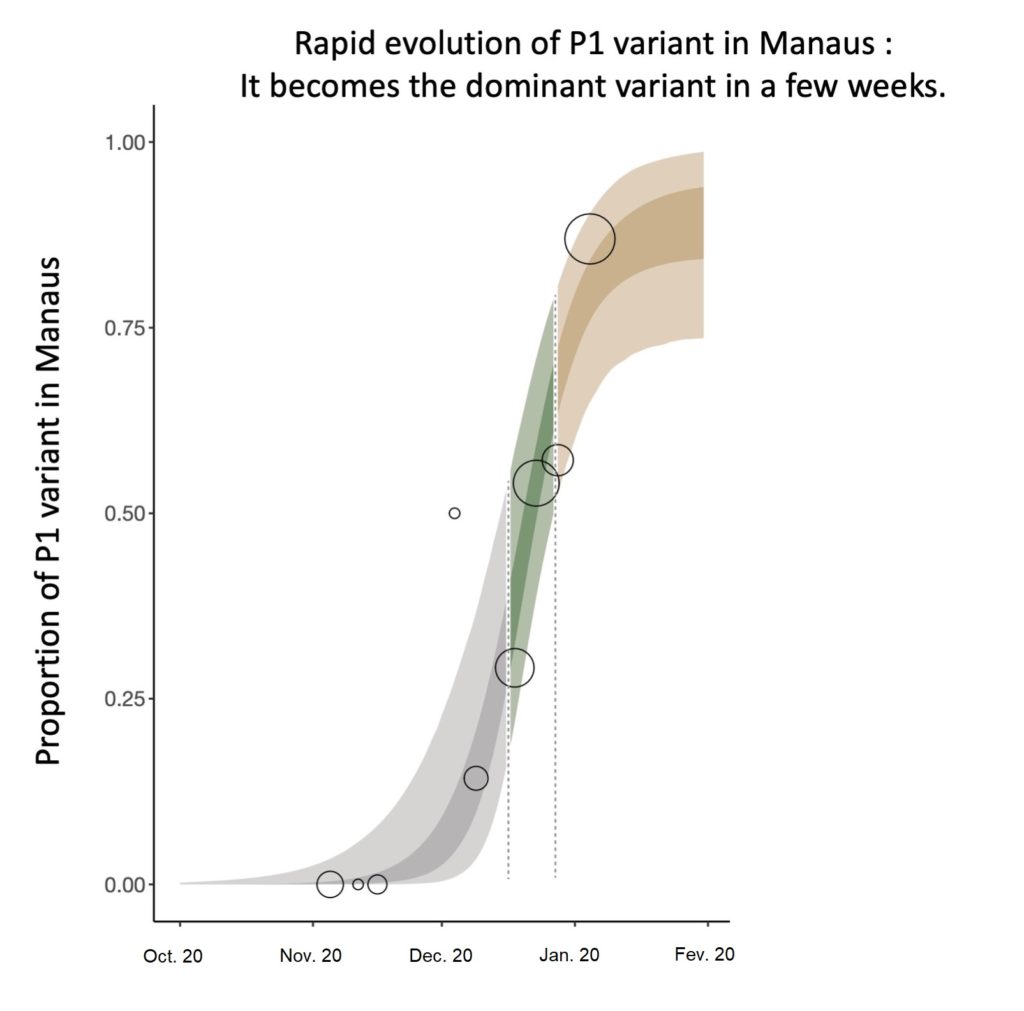