As well as humoral immunity (antibody immunity), which plays an essential role against viral infection, cellular immunity (T lymphocytes) is also very important. Lymphocytes are made up of B lymphocytes, which produce antibodies; CD8 T lymphocytes, often called cytotoxic T lymphocytes, which destroy infected cells; and CD4 T lymphocytes, known as helpers. The T CD4 cells allow the activation of other immune components. Swiss researchers (at the Institute for Research in Biomedicine, Bellinzona, Switzerland) have analysed the T CD4 response in individuals infected by SARS-CoV-2.

The researchers isolated the T CD4 cells of 34 patients who either had slight to severe COVID-19 symptoms, or were non-infected people used for control purposes. They observed firstly that the T CD4 cells of infected patients became highly activated in the presence of SARS-CoV-2 proteins: the spike (S) and nucleocapsid proteins bringing about a proliferation of T CD4 cells and increasing the production of ɣ interferon.

This activation also appears, but at a lower level, when the T CD4 cells come from non-infected individuals. These people could have developed a pre-existing response against other benign coronaviruses allowing cross-reaction immunity against SARS-CoV-2.

But how do these T CD4 cells react in the presence of the S protein? In order to analyse their response, 2,943 T cells specific to the S protein were recovered. 20% of these T cells were RBD specific (the region of the S protein that interacts with the ACE2 receptor to enable the virus to enter the cell) and were present in 32 out of the 34 individuals. The scientists were able to identify multiple regions of the S protein that were targeted and highlighted a particularly important region of the RBD (amino acids 346-365), recognised by the T cells in 94% of the patients. This region is conserved in emerging SARS-CoV-2 variants.

This information is essential to obtain an effective vaccine that would trigger (amongst others) a T CD4 response. 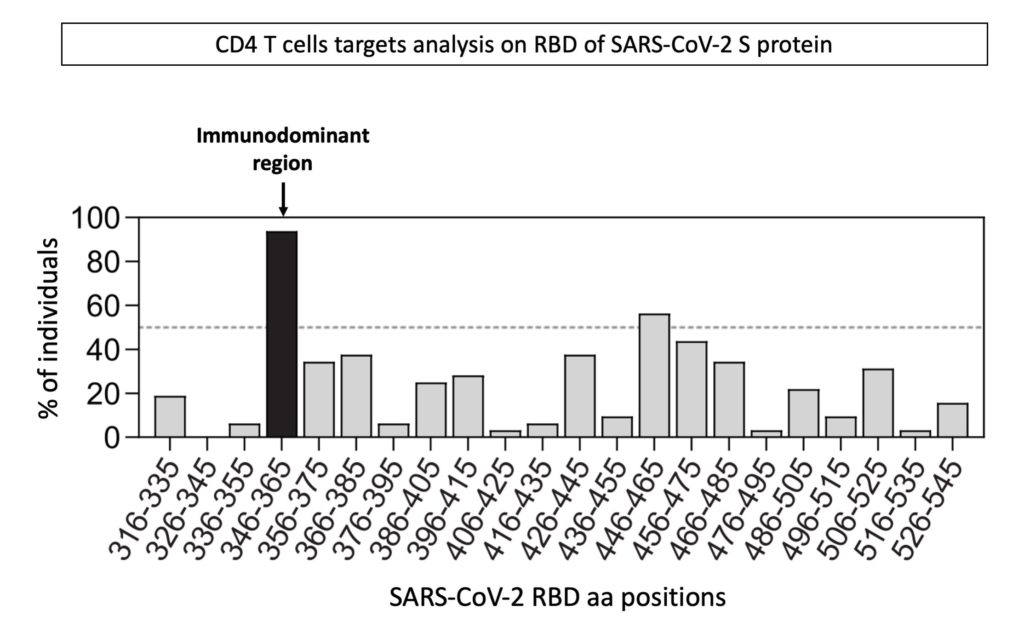