Basic research and its importance in the development of vaccines

The aim of vaccines is to prevent death or invalidity caused by a pathogenic agent. Their development is long and difficult, in the main because they must be able to be given safely to people in good health. This is why vaccines do not exist against the majority of diseases. However, though it takes on average 10 to 15 years for a vaccine to reach the market, only 11 months were necessary to come up with vaccines against COVID-19.

This rapid development was made possible by decades of basic research, in particular, the work of Watson and Crick that 60 years ago described how DNA is transcribed into mRNA then translated into protein. It was then discovered, 30 years ago, that introducing DNA or RNA into a cell results in expression of a protein defined by the nucleic acid sequence. Shortly afterwards, we understood that these proteins could induce protective immune responses. The idea of DNA vaccines was born, though its development suffered delays. Not only did this entail the risk of integration into the genome and thus of cancer, but it also appeared difficult to transport it to the nucleus of the cell.

RNA vaccines avoid these issues, but were subject to problems of stability. In this regard, the research carried out by Katalin Kariko and Drew Weissman on RNA messengers (mRNAs) constituted a major advance. Their discoveries allowed avoidance of the problem of innate immunity not recognising these “foreign” mRNAs, which causes an inflammatory process leading to the destruction of the cell. Such systemic shocks were observed in animal models. In addition, other cellular mechanisms also recognise this RNA and inhibit the synthesis of the protein. However, a subtle biochemical reaction allows transfer, and ribosomal RNAs, which are abundant and essential for the functioning of a cell, not to be recognised by these mechanisms: uridine, one of the components of RNA, is then modified to pseudouridine. Katalin Kariko and Drew Weissman applied this modification to vaccinal RNA, thereby increasing 1 000-fold the expression of the protein and its stability.

The second major advance, developed by other teams, was to use lipid nanoparticles to deliver the mRNA into the cell without being degraded. In 2017, this approach was shown to be effective and safe in anti-flu vaccinations. It was shown shortly afterwards that they effectively targeted the CD4 helper T cells, which increase antibody and memory responses.

We were very fortunate that these advances took place before the pandemic, since they allowed us to successfully deliver safe and very effective vaccines (Moderna, Pfizer), They also open up the possibility of other vaccines or personalised therapies being developed. We owe a great deal to the perseverance of Katalin Kariko and Drew Weissman, since the subtle modification of nucleic acid that they discovered allowed millions of lives to be saved. And in more general terms, this is another concrete example of the clinical implications of basic scientific research. 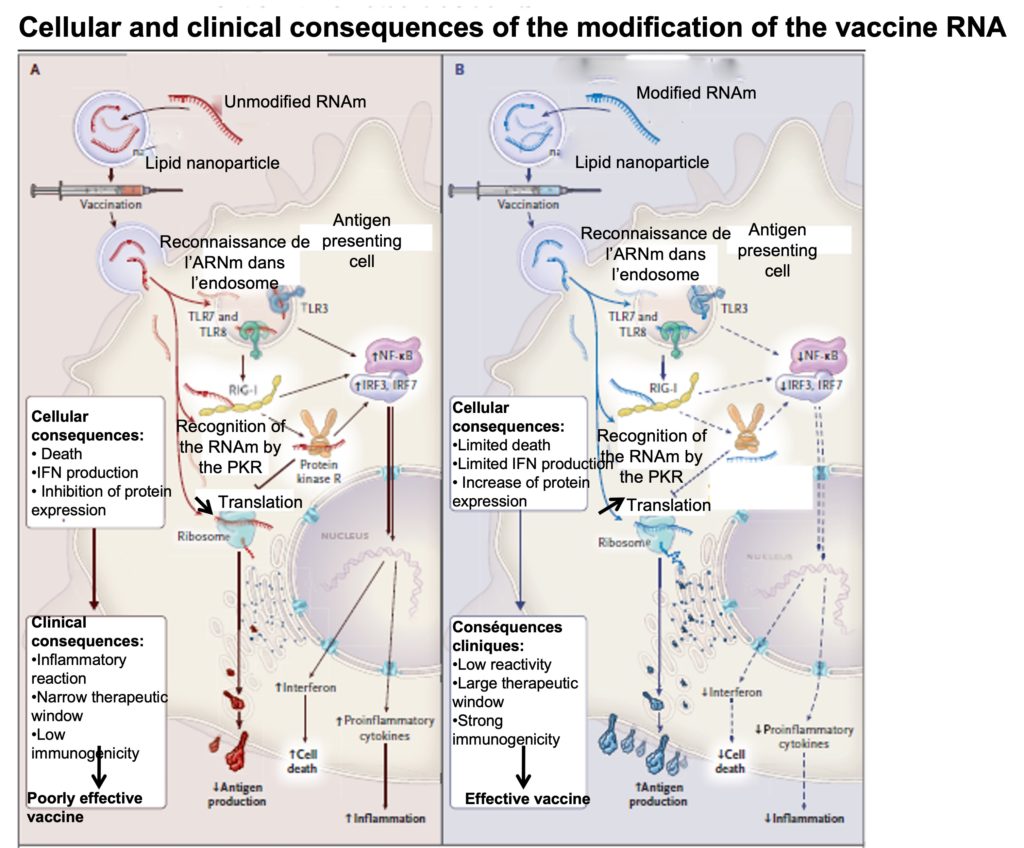