In December 2020, the UK changed its vaccine administration regime for Pfizer-BioNTech and Astrazeneca by spacing the injections at more than 12 weeks instead of the usual 4. The intention was to accelerate vaccine coverage in the population with a single dose, so as to limit the incidence of severe cases of COVID-19. This policy was based on estimations and extrapolations of effectiveness from clinical trials as well as from data from other vaccines. In reality, we did not know the length of protection given by a single dose of an mRNA vaccine, or how the immune response evolves after injections are given with more time between them, or the effectiveness of this strategy when confronted with variants of concern (VoC).

To investigate these issues, a British multidisciplinary consortium (led by the Universities of Oxford and Newcastle) carried out the SIREN study on hospital staff working in the National Health Service. The study enrolled 25 066 individuals between December 2020 and March 2021, the period when the Alpha variant was dominant. The results showed that after a single dose of Pfizer-BioNTech, the antibody response was clearly induced, but with relatively low levels of neutralising antibodies and with a weaker effectiveness against the Beta and Delta variants. A gradual and robust protection was observed against asymptomatic and symptomatic forms of COVID-19, with 72% protection being reached after 3 weeks, a level that remained stable for several weeks. Individuals with prior infection had higher antibody and T cell responses after the 1st injection.

The researchers also compared protection and immune responses after a second dose was given 2 to 5 weeks after the first (short gap) and 6 to 14 weeks after the first (long gap). This PITCH study investigated 589 SIREN participants, of whom 43% had already been infected by SARS-CoV-2. There was a bounce in the antibody response after the 2nd injection. In patients with a short gap between injections, antibody levels attained a peak level after one week, then declined 12-fold over the following 3 months. With a long gap between injections, levels of neutralising antibodies were 2 to 4 times higher. However, CD4 and CD8 T cell anti-spike responses remained stable and robust, no matter what the interval between doses, but a short interval boosted production of IFNɣ by cells, whereas a long interval boosted production of IL2. Neutralisation of the Beta variant was weakened in both cases, but seems to be better where the interval is long. The B cell response remained stable for 12 weeks after the 1st dose; after the 2nd dose (long gap) it increased 7-fold in naïve individuals. People with prior infection had antibody and cellular responses that were bigger and faster, as well as better cross-neutralisation against VoC. This advantage increased if infection occurred longer after the 1st injection.

This study gives a posteriori justification to the UK approach, by showing that the antibody response is more effective when the interval between 2 Pfizer-BioNTech injections is longer than the usual 4 weeks. This timing helps production of IL2 by the T cells, which stimulates in its turn the production of antibodies by the B cells. In addition, a single injection protects against the Alpha variant for several weeks (the exact time remains unclear, however). Though levels of antibodies fall rapidly after vaccination, levels of B and T cells are stable and little influenced by the interval between injections. Prior infection improves antibody and cellular responses, but the length of the interval hardly matters in this case, since the same process has already taken place between the infection and the 1st injection.

This study is still underway in evaluating immune responses in the long term as well as the effects of a 3rd dose. The vaccination regime applied should therefore be adapted according to the severity of local outbreaks, the predominance of VoC, and the availability of stocks. 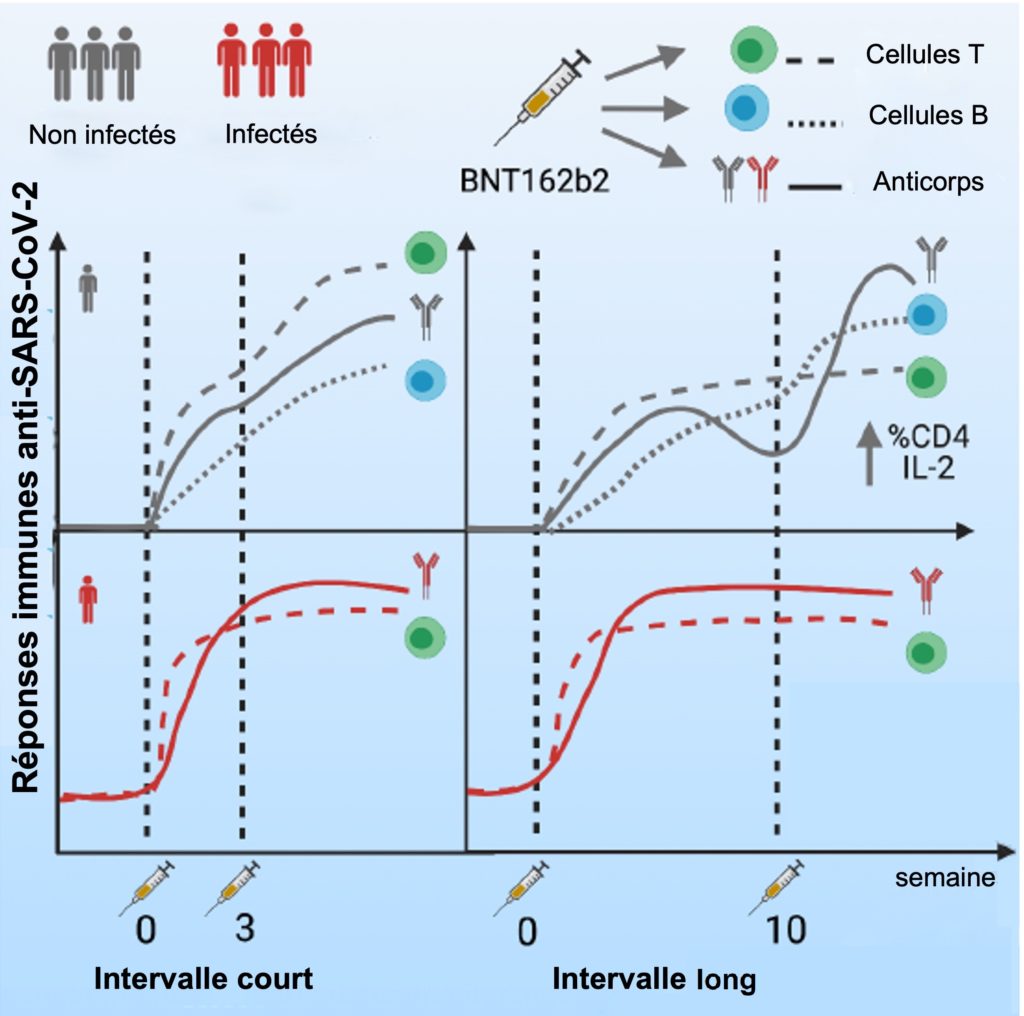