Assessment of antibody responses against SARS-CoV-2

The rapid spread of SARS-CoV-2 can be attributed to the fact that the world’s population was for the most part immunologically naïve. Although we have learned to better understand the virus, many questions remain unanswered.

What we know today is that 4 endemic human coronaviruses (HCoVs: alpha- and beta-coronaviruses, NL63, 229E) cause respiratory infections that are generally benign, but that SARS-CoV-2 causes various clinical manifestations ranging from asymptomatic to fatal. Numerous factors determine the seriousness of COVID-19, whether viral (infectivity, evolution) or linked to the host (age, pre-existing conditions, immune status). SARS-CoV-2 codes for 4 structural and 25 non-structural or accessory proteins, but immune responses are in general directed against the structural proteins S (spike, controlling entry of the virus into the cell) and N (nucleocapsid, which organises the viral genome). When an immune response occurs, the Spike and its RBD (Receptor Binding Domain) are the principal targets of neutralising antibodies.

Overview of the humoral immune response to SARS-CoV-2 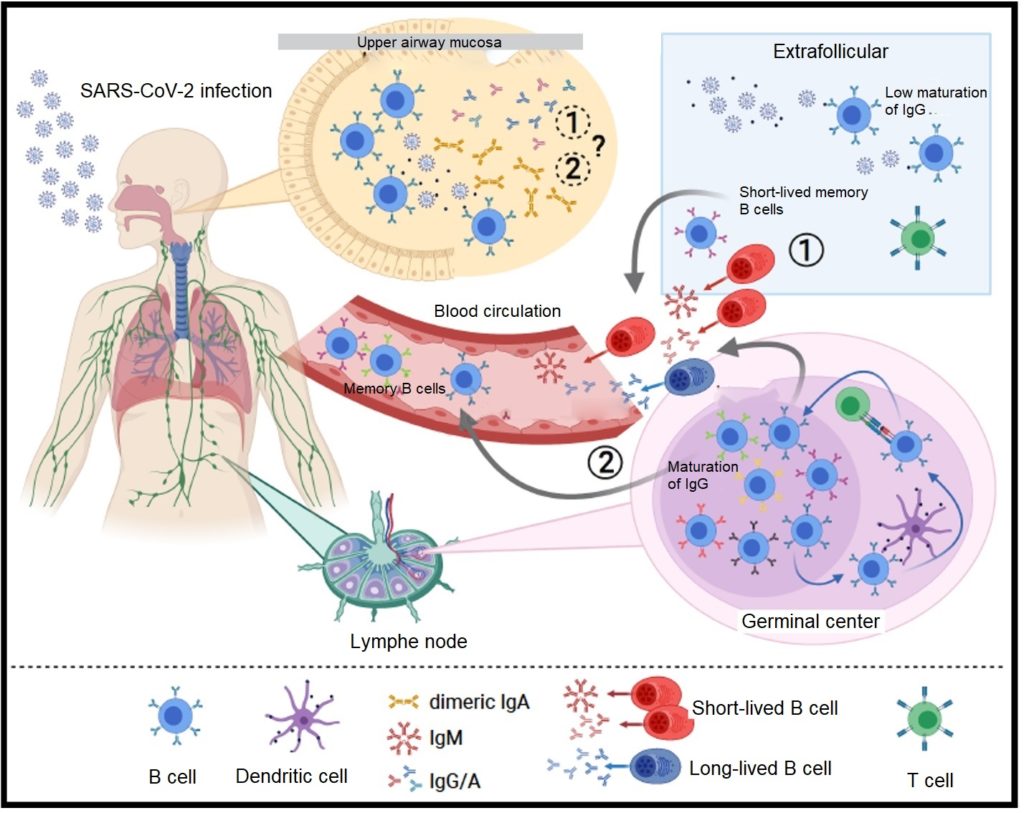 More than a year after the start of the pandemic, numerous questions remain, notably concerning the anti-SARS-CoV-2 antibody response:

We do not know for certain, because studies in this area have been rare and contradictory. But the question remains open, since the majority of non-infected people show a cross-reactivity against the spike (5% of patients) and nucleocapsid (10-15%) proteins of SARS-CoV-2. These antibodies in the blood (IgGs) are in the main directed against the S2 sub-unit of the spike, but only 1% of samples contain IgGs against the RBD of SARS-CoV-2 (the RBD is situated in S1). This frequency is higher in children, probably due to repeated exposure to HCoVs. We also do not really know if this cross-protection is underpinned by the humoral or cellular response.

Several studies have shown that neutralising IgG antibodies, which target the RBD for the most part, but sometimes other domains, effectively block viral infection in vivo. The minimal level of IgGs required for protection has still not been defined. While these antibodies are essential for protection, they seem to be less effective if the infection is already well established. On the other hand, it is clear that severely ill and elderly patients develop higher levels of IgGs, while children, who are usually asymptomatic, develop quite low levels. These observations suggest that the innate antiviral response, the cellular response, the effector functions (Fc) of the IgG, and the complement system play a major role in the evolution of the disease, but these immune mechanisms are less well characterized.

Following a primary infection, anti-RBD antibodies begin to be produced 12 hours after the appearance of symptoms and reach a peak 2 – 4 weeks later. Some viral infections provide life-long protection after recovery, but in general this is not the case with HCoVs, which generate shorter protection. This is why there is such frequent reinfection by HCoVs. The level of anti-S IgGs appears to drop a little 8 weeks after infection; this reduction is quicker for anti-RBD antibodies and still more so for the IgAs. The IgAs govern the defence of the mucous membranes (part of the respiratory system), but the importance of this mechanism within COVID-19 has not been defined. The reduction in IgGs in severe cases is, however, less significant. Following infection, an initial pool of extrafollicular B cells will produce elevated levels of antibodies as a temporary measure. Then B cells that have matured in parallel in germinal centres will take over to ensure that there is a more sustainable and specific production of antibodies, with less high levels. The functioning of these germinal centres seems to be altered in the most severely ill patients. While the level of anti-RBD memory B cells seems to be stable up to 8 months after the appearance of symptoms, the exact length of protection is still unknown. As a result, the potential for cases of reinfection is not well described.

Several currently used vaccines (Moderna, Pfizer, Janssen) show more than 90% efficacy in protecting against COVID-19. In targeting the S protein only, these vaccines cause high levels of neutralising IgG antibodies to be produced, whose peak levels (like the levels of memory B cells) are comparable to severely ill COVID-19 patients. They induce effective activation of germinal centres. Here too, the length of this protection has not been clearly determined.

Even though SARS-CoV-2 mutates relatively little compared with other viruses, a hundred or so mutations have been identified since the first strain in Wuhan. The variants of concern carry mutations in the RBD, giving the virus better affinity with the ACE2 receptor and less sensitivity to IgG neutralising antibodies, whether induced by natural infection, vaccination, or administered in passive therapy. For example, the Gamma (g, Brazilian) and Beta (b, South-African) variants (which share the E484 mutation), and the Epsilon (e, Californian) (L452R) and Delta (d, Indian) (L452R and T478K) variants are able to escape immunity or, in other words, resist it. The effectiveness of certain vaccines seems to change in response to variants, but we do not know if it remains sufficient to avoid severe forms of COVID-19 brought on by these strains.

Despite the remarkable efforts of the scientific community during the last 16 months, many questions remain to be answered. In a similar way to flu jabs, the efficacy of the vaccines needs to be regularly evaluated in the light of current and future variants. This will enable us to know if it is enough to give booster injections to remain protected, or if the vaccines need to be re-designed. It will also be necessary to ascertain whether these vaccines, or natural infection, will provide adequate cross-protection against future strains of coronavirus. 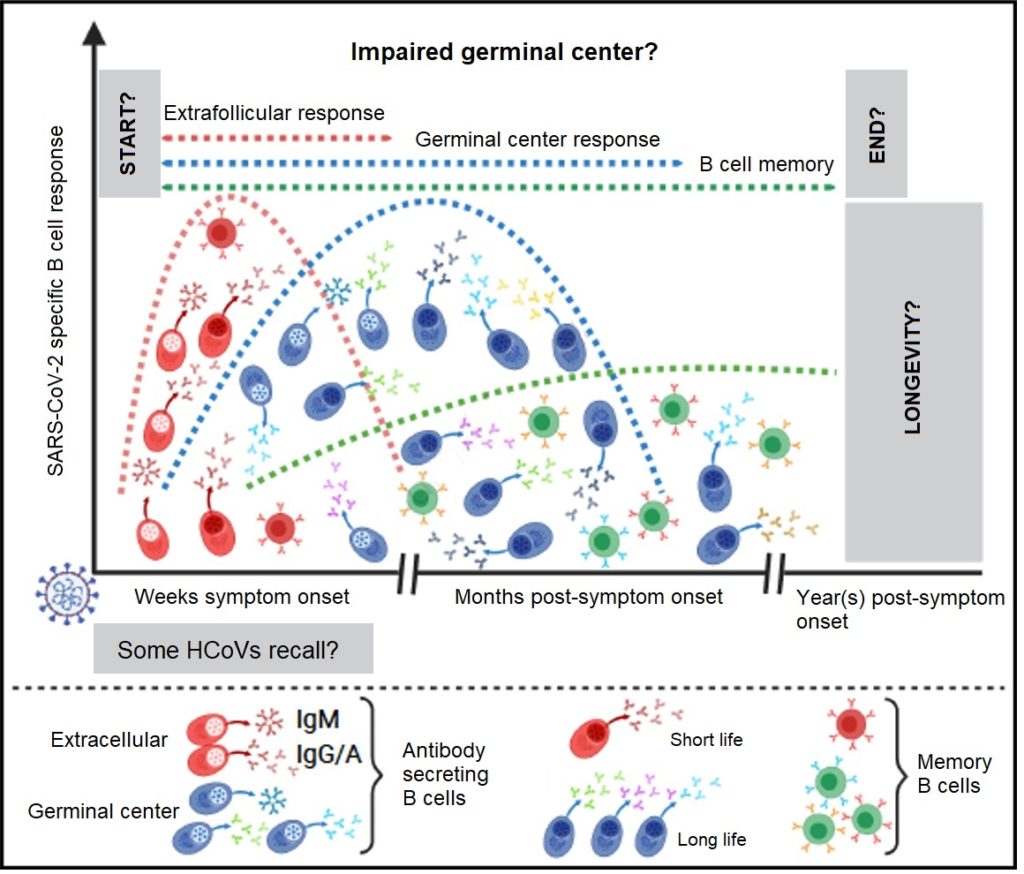