Are antibodies transmitted to the foetus?

Certain sectors of the population are more at risk during the COVID-19 epidemic. This is especially true of pregnant women, amongst whom there are more severe cases than in other people of the same age. The foetus protects itself from pathogens through the transfer of maternal antibodies (IgG) via the placenta. This transfer of antibodies starts in the 1st three months of pregnancy but increases exponentially through to the 9th month. In the case of the majority of pathogens, levels of IgGs in the umbilical cord are higher than in the mother’s blood.

It has been established that certain maternal infections alter the transfer of antibodies through the placenta, but it is not known exactly how this works. It may be due to changes in the glycosylation of antibodies (addition of sugars), which may alter their immunological properties during infection.

For this reason, the transfer through the placenta of antibodies targeting SARS-CoV-2 has recently been studied. Researchers at Harvard brought together a cohort of 22 pregnant women infected by SARS-CoV-2 during the last three months of pregnancy, and 34 pregnant women not infected by the virus at the same stage of pregnancy. Serological profiles for the influenza virus (the influenza pathogen), Bordetella pertussis (the whooping cough agent) and SARS-CoV-2 were derived from the blood of these pregnant women and from the blood of their umbilical cord.

Specific antibodies against SARS-CoV-2 in maternal and cord blood were evaluated to investigate possible alterations in the transfer mechanisms. Similarly, antibody levels against the influenza virus and the Bordetella pertussis bacteria were measured, serving as a reference for observing the transfer of antibodies generated by infection, or by past immunization.

The first observation was that antibodies targeting the influenza virus and the Bordetella pertussis bacteria are efficiently transferred through the placental barrier in both mothers infected by, and not infected by, SARS-CoV-2. On the other hand, a significant reduction in the transfer of antibodies targeting SARS-CoV-2 was observed in infected mothers in the last three months of pregnancy. This reduction in transfer was not seen when infection took place during the second three months of pregnancy.

In order to understand the mechanism responsible for the reduction in transfer of SARS-CoV-2 antibodies, the women’s glycosylation was studied. It was shown that these antibodies bring changes in the addition of sugars to the antibody protein chain. These changes could be responsible for the reduction in placental transfer. But this would be partially compensated. Certain factors seem to enable more efficient transfer through the placenta of antibodies which have been modified by the glycosylation. For example, the FCGR3A receptors have enhanced affinity for antibodies bearing these glycosylation differences. A slight increase in the expression of the FCGR3A receptors in the placenta of infected women was noted, but also an increase in their proximity to other receptors, the Fc, which may also facilitate the transfer of modified antibodies. 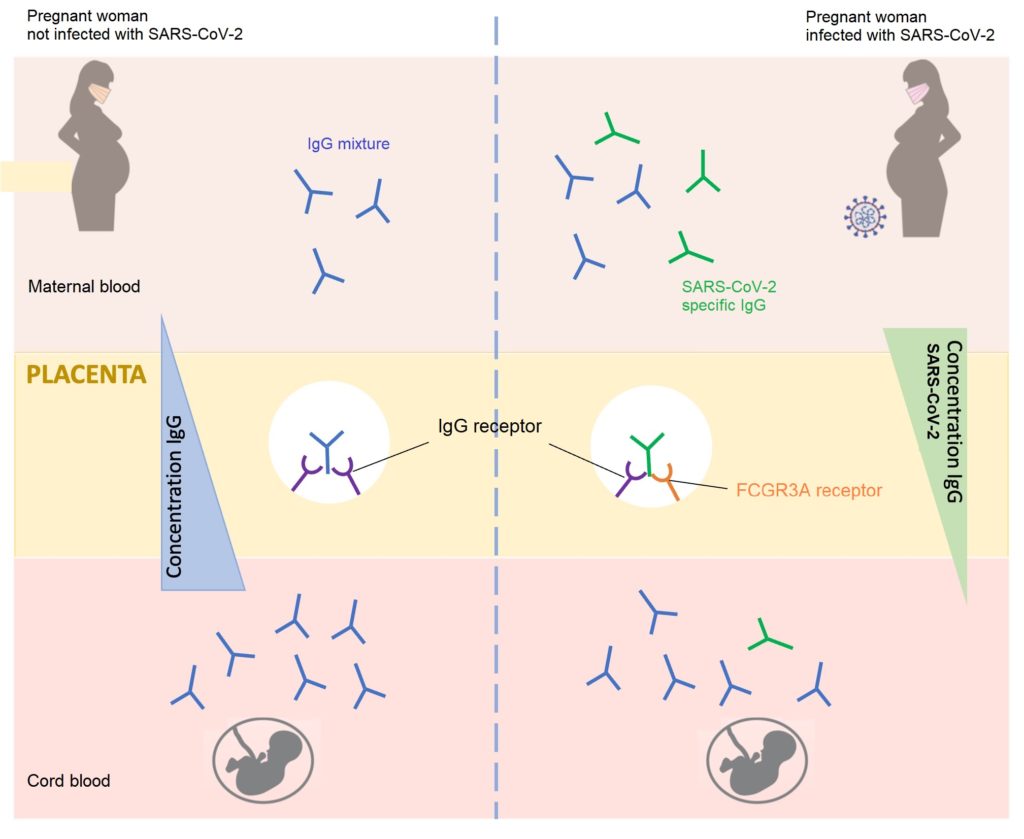 Even though the results of this analysis are interesting, it must be remembered that the number of women in this group was limited. The study’s conclusions need therefore to be verified by other research.