The principal aspects of the adaptive response to SARS-CoV-2

The human immune system is made up of innate immunity and adaptive immunity. Innate immunity is not specific to invading pathogens, but allows an immediate response in the case of any aggression. The adaptive immune response is specifically directed against a pathogen, allowing immune-memory to take place, but has a slower reaction time. It is made up of 3 cellular components: the B (LB) lymphocytes that produce antibodies, the T CD4 (LT CD4) lymphocytes (known as “helpers”), allowing the activation of other immune components, and the T CD8 (LT CD8) lymphocytes, known as cytotoxics, that destroy the infected cells. The adaptive immune system is essential for the elimination of the virus and for immune-memory, a primordial response in vaccine development. So understanding how the adaptive immune system works in the case of infection by SARS-CoV-2 is indispensable in the fight against the pandemic.

When viral infection takes place, the innate immune system recognizes the pathogen and triggers expression of the type 1 interferon, as well as other pro-inflammatory molecules, a few hours after infection. This reaction enables the adaptive response to be triggered, as well as creating a local inflammatory environment. The adaptive response allows production of enough cells to control the infection, generally in 6 to 10 days. 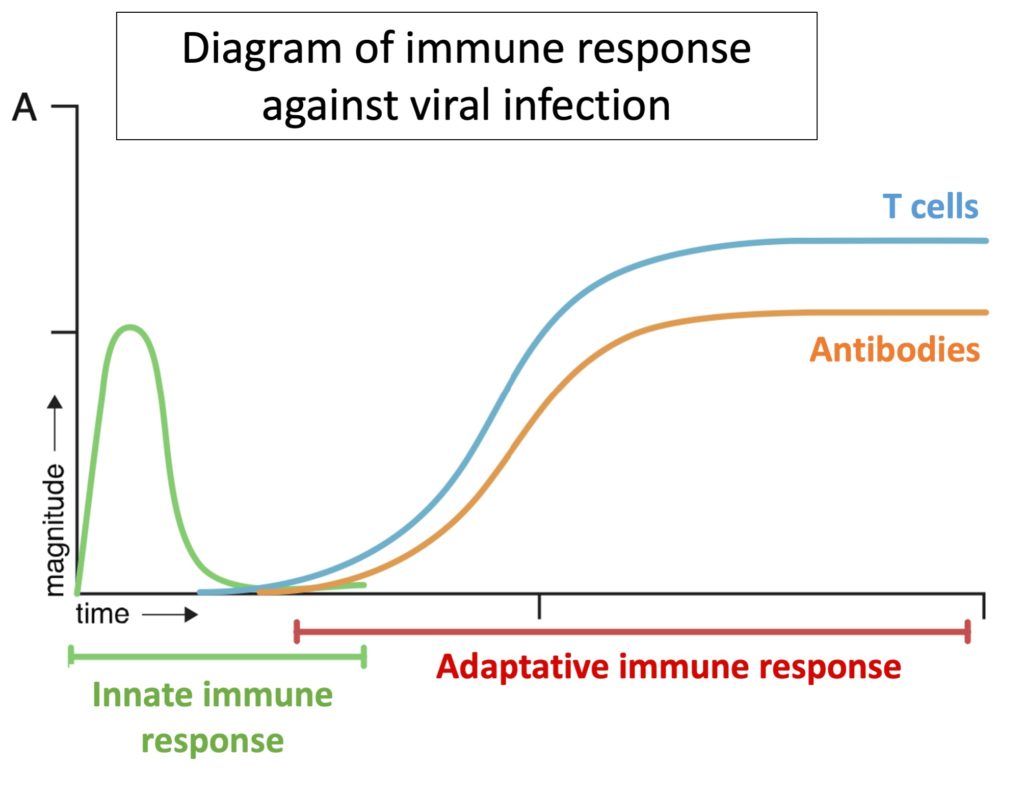 However, when infection by SARS-CoV-2 occurs, the virus manages to slow down the triggering of the innate immune response and thereby the triggering of the adaptive immune response which is essential to defeat the virus. If the adaptive immune response is delayed, it seems that the innate immune system attempts to compensate for the absence of LT by intensifying its response. One hypothesis is that this massive innate response could be the cause of pulmonary pathologies. In fact, it is sometimes the case that the immune response to a viral infection causes more damage than the infection itself. Other researchers consider that it is the LT or the antibodies that cause pathologies: antibodies could, in certain cases, facilitate the entry of the viral particle into cells, as has already been observed in, for example, the dengue virus.

The LT CD4 and LT CD8 antibodies play an essential role in protection against viral infections. Nevertheless, the role and the importance of these  components differs according to the virus. In a SARS-CoV-2 infection, the LT CD4 response is greater than the LT CD8 response. LT CD4s specific to SARS-CoV-2 can be detected from 2 to 4 days after the onset of symptoms, and the level of specific LT CD4s is closely linked to a less severe form of the disease. The presence of LT CD8 is also linked, though less so, to an improved prognostic for COVID-19. Antibodies specific to SARS-CoV-2 are detected in the majority of infected patients 5 to 15 days after the onset of symptoms. Neutralizing antibodies (those which prevent the virus from entering cells) are also present in the majority of infected individuals. On the other hand, a high level of neutralizing antibodies does not appear to lead to reductions in the illness’ severity. It seems possible that the infection can be controlled by the presence of LT CD4 and CD8 alone, even without neutralizing antibodies.

Age is one of the principal risk factors in severe cases and death from la COVID-19. An individual aged 75 is 200 times more likely to die from SARS-CoV-2 than a 20 year old, since the adaptive immune response is less efficient in older people. The LT response to a new viral infection depends on reserves of naive LT cells, and numbers of these decline with age. SARS-CoV-2 is a new pathogen, a member of the coronavirus family to which viruses that cause colds also belong. SARS-CoV-2 is a very different proposition, but there are nevertheless memory-immune cells targeting the coronaviruses that cause colds that also react in the case of SARS-CoV-2 infection. These are principally the LT CD4s.

In order that immunity arising from infection or from vaccination becomes effective, memory-immunity is necessary, but it is also important that the virus does not mutate too quickly. Certain RNA viruses, such as those causing measles or polio, are relatively stable over time and their surface proteins do not undergo rapid mutation. This means that vaccines against these viruses remain effective some 70 years after their development. The situation with SARS-CoV-2 is still to be seen. This is why it is essential to monitor the appearance of mutations in the viral genome. The ideal vaccine would allow long-term production of antibodies and would bring about a sterilizing immunity to prevent transmission of the virus. However, a vaccine that prevents symptoms of the illness does not necessarily stop transmission of the virus.