Almost all the therapeutic neutralising antibodies that have been clinically tested are IgG antibodies (or G immunoglobins, that represent more than 75% of antibodies present in serum), administered intravenously. But the IgG antibodies are less effective in reaching the mucous membranes and must therefore be given in high dosages to attain required levels in the respiratory passages. In addition, the IgG antibodies developed against SARS-CoV-2 seem to be less powerful against emerging variants. However, IgM antibodies (corresponding to another category of immunoglobulins) are produced earlier by the organism than the IgGs. They are able to gain access to the mucous membranes more easily, but are soon replaced. Starting from this information, American researchers at the University of Texas, the University of Houston, and IGM Biosciences Inc, Mountain View have recently developed an IgM antibody administered intravenously that is effective against SARS-CoV-2 and its variants.

The researchers modified 6 antibodies recognising different epitopes (regions targeted by antibodies) on the SARS-CoV-2 spike (S) surface protein, so as to optimise their binding to, and neutralisation of, the viral particle. Their first observation was that one of these antibodies, the IgM-14, seems to be more effective than the corresponding igG (IgG-14). They then tested the efficacy of these antibodies on known variants with a resistance to therapeutic antibodies (such as the mutation in position 484 of the β South African, ɣ  Brazilian and δ Indian variants). The IgM-14 antibody that was developed allows more effective neutralisation of the variants tested, unlike the IgG.

They then administered the IgM-14 antibody intranasally in mice and showed that this method of administration may protect the mice against SARS-CoV-2 infection. In addition, the first pre-clinical studies carried out on rats, showed that the treatment was innocuous and proved that the inoculated IgMs last for several hours in the blood.

This work constitutes the first steps of a promising method of treatment, though further clinical validation is necessary. 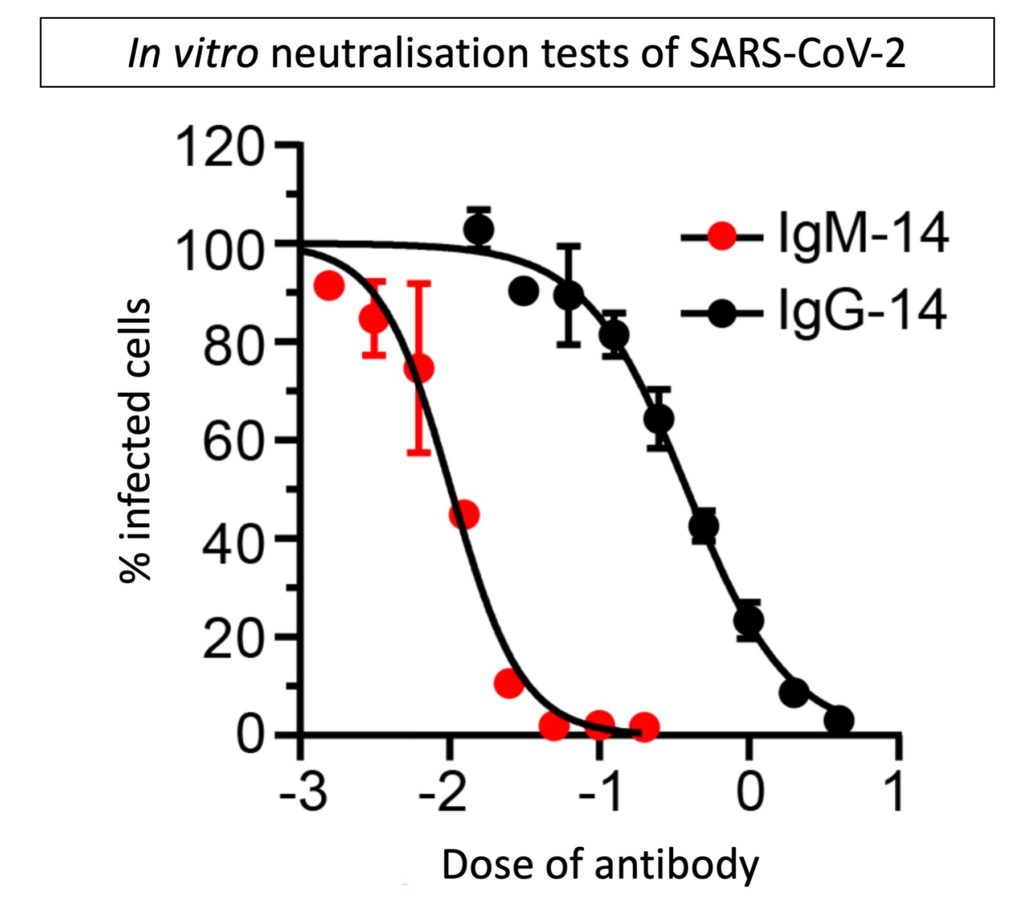