A new type of vaccine?

The development of vaccines that effectively block infection by and transmission of SARS-CoV-2 has become a major priority. They must incite the production of neutralizing antibodies, since several recent studies have shown that levels of these antibodies in the blood are linked to protection against reinfection. These antibodies target the spike viral protein and block the entry of the virus into the cell. During this entry process, the spike protein undergoes several structural changes (see the  28 December-3 January 2021 letter at news-COVID-19.info), passing from a so-called “pre-fusion” state (interaction of the spike with the ACE2 receptor) to a “post-fusion” state (interaction of the spike with the cellular membrane using the fusion peptide). Since neutralizing antibodies are mainly directed against the pre-fusion state, the spike protein needs to be stabilized in this form for an effective vaccine to be developed.

More than 200 potential vaccines, using different biotechnologies, are being developed. The most advanced are the RNA vaccines, viral vectors and inactivated vaccines. There is one other alternative to add: the subunit vaccine, where the spike is administered in its protein form. This approach has already been envisaged for use against other pathogens (flu, AIDS, malaria, viral bronchitis) and sometimes uses biological nanoparticles as support.

Dutch and French teams specialising in this area (at the University of Amsterdam and the CEA, Fontenay-aux-Roses) joined forces to produce nanoparticles presenting the spike protein under its pre-fusion form. To do this, the spike was genetically grafted onto 32 polypeptide subunits (fragments of proteins) that self-assemble to form icosahedral nanoparticles (polyhedra limited to 20 faces) of 30 nm in diameter, named l53-50. These nanoparticles present 20 copies of the spike, which is supposed to increase its immunogenic power tenfold. They were produced in human cells, purified, and their structure verified by electron microscopy. The researchers then checked that they were recognised by several neutralizing antibodies from convalescing COVID-19 patients, and showed that they were capable of activating in vitro B lymphocytes (antibody-producing cells) specific to SARS-CoV-2.

The nanoparticles were then administered (using intramuscular and subcutaneous injection, with adjuvants) three times (at 0, 4 and 12 weeks) to mice (10 micro-g) and rabbits (30 micro-g). Already in the two weeks following the first injection, neutralizing antibodies were detected (ELISA and in vitro testing), and their levels were enhanced by booster injections. Then cynomolgus macaques were in turn immunised with nanoparticles (50 micro-g via intramuscular injection + adjuvants) with two boosters at 4 and 10 weeks. Two weeks afterwards, researchers observed a complete, systemic and expanding immune response. B and T lymphocytes specific to the spike protein (30% of which were specific to the receptor’s binding domain) were present in the blood in significant quantities. B lymphocytes and T memory cells were detectable, and the anti-spike (including neutralizing) antibodies showed higher levels than in convalescent humans after 4 weeks.

Finally, these immune macaques were inoculated with the virus, as well as control macaques that had not received the nanoparticles, using elevated doses of SARS-CoV-2 (10 to 100 times more than in certain studies). In the trachea and nasopharynx, the viral charge reached its peak in all the animals 1 to 3 days after inoculation (PCR) but it was 300 to 500 less high in the vaccinated animals. The virus was undetectable after 6 days, compared to 14 days in the control-animals. Levels of sub-genomic RNA, which reflect the virus’ active replication, were 5400 times smaller in the nasopharynx 2 days after, indicating that the risks of transmission had been significantly reduced. Sequencing of the viral population showed that no escape mutations had appeared in the vaccinated animals. In addition, the severity of the infection was reduced, since no animal had developed lymphopenia (an abnormally low level of lymphocytes) and there was little lung damage, compared to the control-animals. 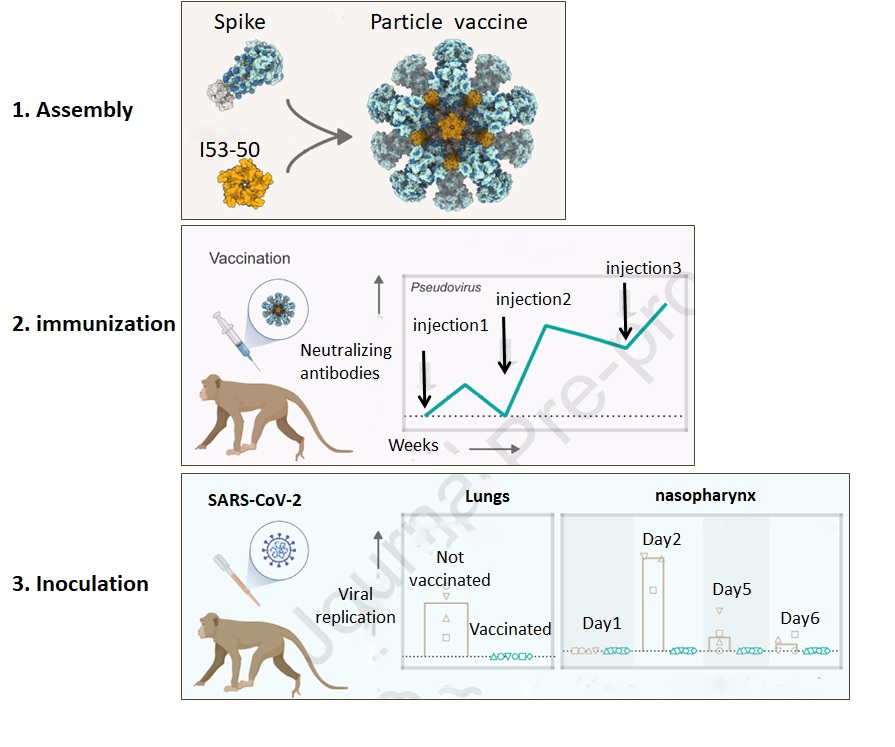 These nanoparticles are therefore a promising alternative to current vaccines since they enable efficient generation of neutralizing antibodies in several types of animal. They proved capable of protecting the macaques from reinfection and limited the risks of SARS-CoV-2 transmission. Compared to other technologies, the nanoparticles generate 10 times more neutralizing antibodies, a performance comparable to the Moderna RNA vaccine currently being used. The nanoparticles allow the complete elimination of viral replication in the upper respiratory passages in 5 days, unlike other vaccines.

However, this study does possess a bias since the macaques were infected 15 days after the last immunization, when neutralizing antibodies peak. Also, the protocol used here depended on 3 injections, which would be difficult to reproduce in a large-scale human vaccination programme. Although complementary research is necessary, the performance of the nanoparticles could be improved still further since there are other ways of stabilising the spike protein and making intranasal vaccinations more efficient. However, we do not know if clinical trials are planned, or whether the nanoparticles are effective against certain variants.