Coronaviruses are zoonotic pathogens (deriving from animals) which have caused various pandemics over the last 20 years. The 3 most pathogenic coronaviruses for humans belong to the class of β-coronaviruses: SARS-CoV-2, SARS-CoV and MERS-CoV. The spike surface protein (S)  of these coronaviruses enables entry of the virus into the cell. The S1 sub-unit of S, the most variable, is responsible for interaction with the ACE2 cellular receptor. The S2 sub-unit, more stable, is responsible for the fusion of viral and cellular membranes. The majority of neutralising antibodies target S1. But those antibodies targeting S2 can neutralize more remote coronaviruses, such as different variants, as this region is more conserved. Swiss and American researchers (at Humabs Biomed SA, Switzerland, University of Washington, Seattle, USA and Vir Biotechnology, San Francisco, USA) have studied antibodies targeting the S2 region that are able to neutralise different human and animal β-coronaviruses.

The researchers firstly isolated antibodies of memory-B lymphocytes from 3 patients having been infected by SARS-CoV-2. 5 antibodies (IgGs) were selected since they target the S2 sub-unit of S of different β-coronaviruses including SARS-CoV, SARS-CoV-2 and MERS-CoV. They then evaluated the neutralisation potential of these antibodies to inhibit the original SARS-CoV-2 Wuhan viral strain.

It appears that one of these 5 antibodies completely neutralises the virus. This antibody was selected for neutralisation tests against SARS-CoV-2 variants (Alpha, Bêta, Gamma and Kappa): it enabled all these variants to be neutralised.

Researchers then studied the structure of this antibody-spike complex using cryo-electron microscopy, and analysed the region of S2 in contact with the antibody. The selected IgG neutralised the virus by inhibiting the rearrangements necessary for membrane fusion.

Finally, the scientists evaluated the prophylactic activity of this antibody on hamsters infected by the Beta variant of SARS-CoV-2. The antibody was administered intra-nasally 24 hours before infection. This treatment led to the reduction of viral load in the lungs of the hamsters.

These preliminary results may help the design of vaccines that allow the production of antibodies of this type against emerging variants of SARS-CoV-2, as well as against different coronaviruses. 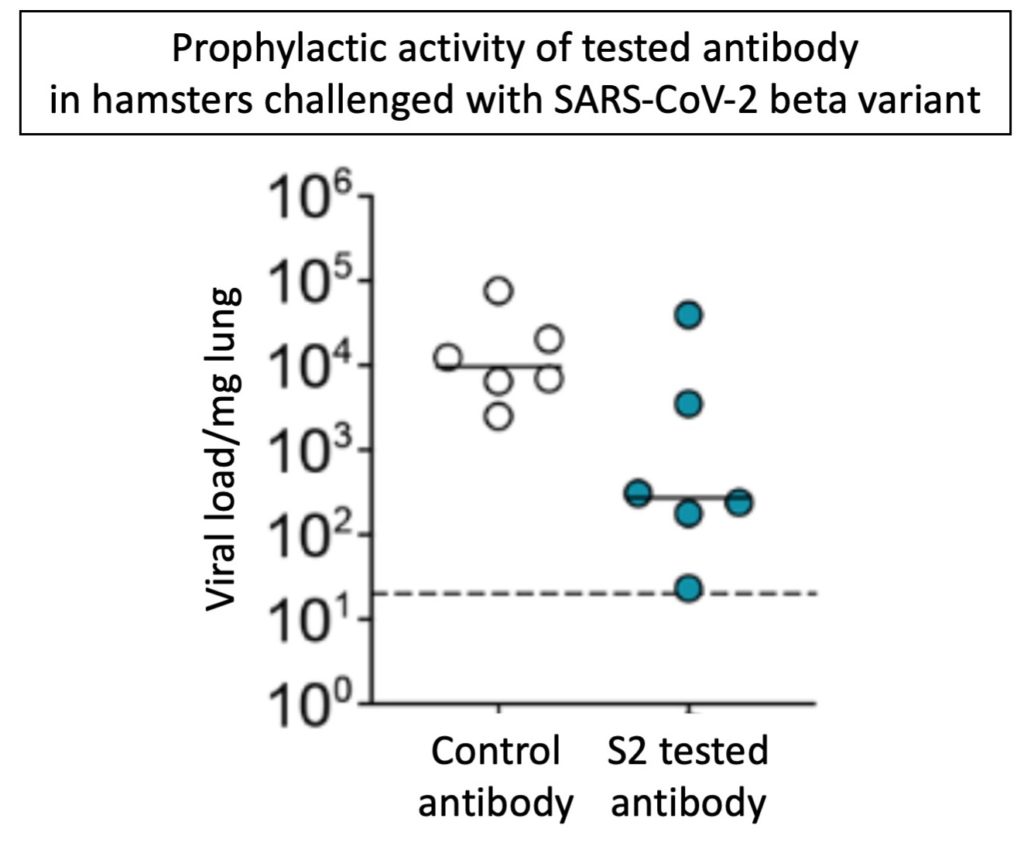