However, few studies have analysed this phenomenom over the long term. American researchers (at Rockefeller University, New York) have analysed in detail groups of antibodies just after infection by SARS-CoV-2, and later, during patient convalescence. They were thus able to observe the accumulated antibodies, their evolution, and their impact on viral populations.

The researchers firstly selected 1 072 anti-RBD antibodies from a cohort of individuals who had recovered from COVID-19, 1 month and then 6 months after the start of their infection. The scientists’ first observation was that antibody sequences were more diversified after 6 months than after the first month. Antibodies therefore evolve during the convalescence period.

In order to determine the consequences of this evolution, the researchers selected 6 groups of antibodies from 5 individuals. They were thus able to show that antibody maturation enables an increase in neutralisation capacity. In addition, this maturation enables the antibodies to modify their targets in neutralising some variants of the virus that have emerged, such as the variants carrying the E484K mutation (the Beta (South African) and the Gamma (Brazilian) variants). To escape most of these evolved antibodies, the virus has to accumulate several mutations, thereby limiting these variants’ escape potential.

The researchers then examined whether the maturation of these antibodies could allow other viruses close to SARS-CoV-2 (that is, from the sarbecovirus group) to be neutralised. They tested neutralisation of 3 sarbecoviruses, with an RBD sequence identical at 94%, 73% and 50% to SARS-CoV-2. It appears that some antibodies, after they have evolved, are capable of neutralising all 3 viruses.

Finally, the researchers analysed the structure of the antibodies by cryo-electron microscopy to understand the effects of mutations during their maturation. The mutations enable an increase in molecular contacts between the antibody and the RBD of SARS-CoV, giving the antibody greater neutralisation effectiveness. The overall results show that where there is prolonged or repeated exposure to viral antigens, antibody diversification makes them more effective against the virus.

It is clear that understanding the mechanisms of antibody evolution during convalescence or after vaccination is essential for the development of effective therapies, particularly against emerging SARS-CoV-2 variants. 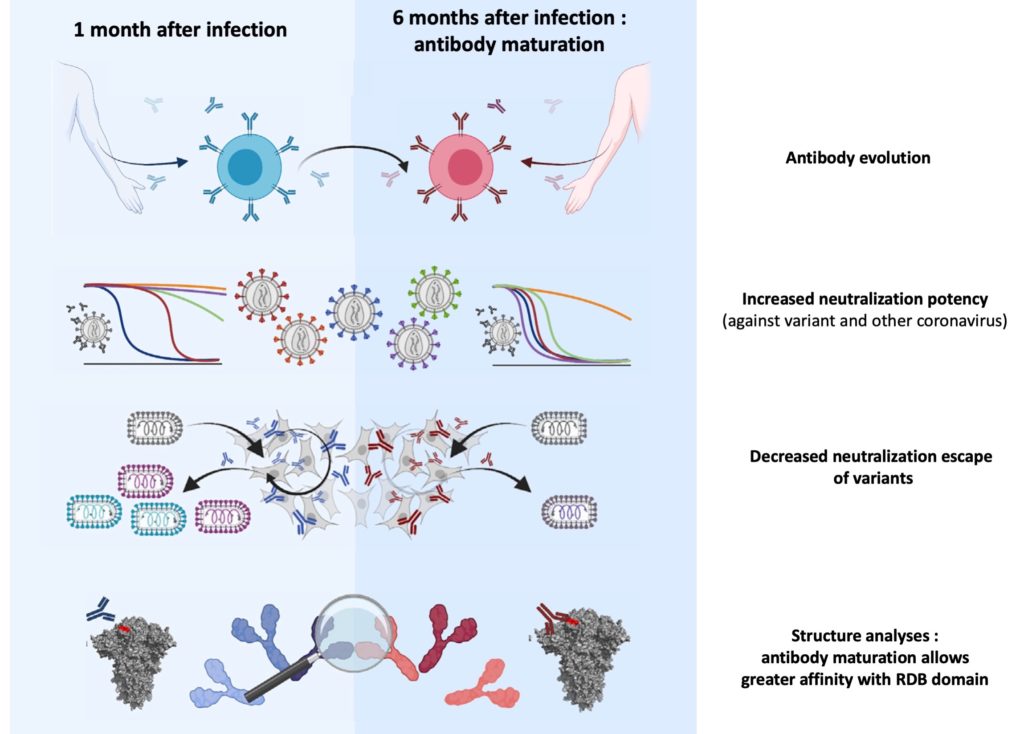