Will we be protected against future variants?

Much data indicates that the antibody response can suffice as protection against reinfection by SARS-CoV-2. By binding to the spike viral protein, neutralising antibodies. block viral infection. However, the antigenic drift of the virus calls into question this protection and we do not know enough about the factors that may allow effective protection against all strains of the virus.

American researchers at Harvard University (Cambridge) have identified the domains within the spike that may enable cross-protection against diverse SARS-CoV-2 variants. They isolated and analysed the anti-spike memory B lymphocytes in 19 convalescing COVID-19 patients at the beginning of the pandemic, that is, before the appearance of the first variants. The responses of these patients were consistent and effective against this original strain of the virus.

What antibodies did these patients develop? The researchers selected a total of 157 antibodies produced in vitro by these memory B lymphocytes, some of which recognise the spike of SARS-CoV or other betacoronaviruses. Taking into account their affinity for the spike, these antibodies are classified into 7 groups and annotated according to their abundance: 3 bind to the RBD, 2 to the NTD and 2 to the domain S2 (RBD-1, 2, 3; NTD-1, 2 ; S2-1, 2).

These 7 groups cover all the binding zones of existing anti-spike antibodies. For example, class I and II neutralising antibodies, already described in research literature, correspond to the group RBD-2, while the antibodies recognising SARS-CoV,  MERS-CoV or other betacoronaviruses correspond rather to the RBD-1 or S2-1 groups. Structural analysis allows detailed mapping of these groups on the spike as well as the binding mechanisms of certain antibodies.

The most powerful neutralising antibodies are associated with the RBD-2 and NTD-1 groups. Mutations of the Alpha (UK) variant affect the binding and neutralisation capacities of numerous RBD-1 and NTD-1 antibodies (the RBD-1s never completely lose their affinity, unlike the NTD-1s), whereas mutations of the Beta (South African) and Gamma (Brazilian) variants principally affect those belonging to the RBD-2 and NTD-1 groups (total loss of binding capacity for some). Others maintain effective neutralisation capacity. However, the S2 group antibodies are not affected by the mutations of these 3 variants and mostly support cross-protection against other strains.

This work provides a kind of global atlas of long-term anti-spike responses and notes those which can enable protection against future strains of SARS-CoV-2. It shows that this protective response has some flexibility in dealing with variants, even if circulating antibodies are absent or unsuitable. The loss of protection against severe forms is therefore not an inevitable consequence of a decline in levels of antibodies. The effects of antibodies targeting distinct epitopes show the importance of developing a memory B response that is polyclonal and robust in order to provide protection against variants. 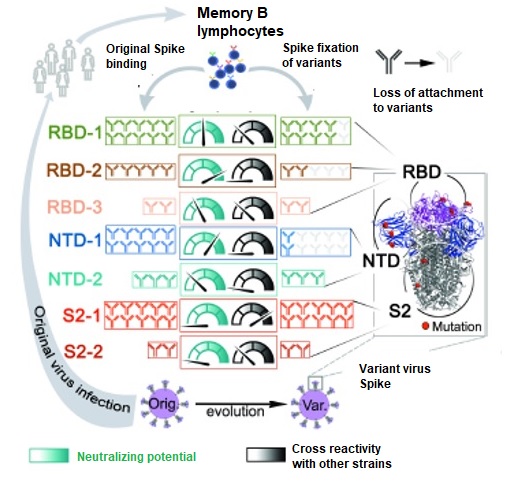